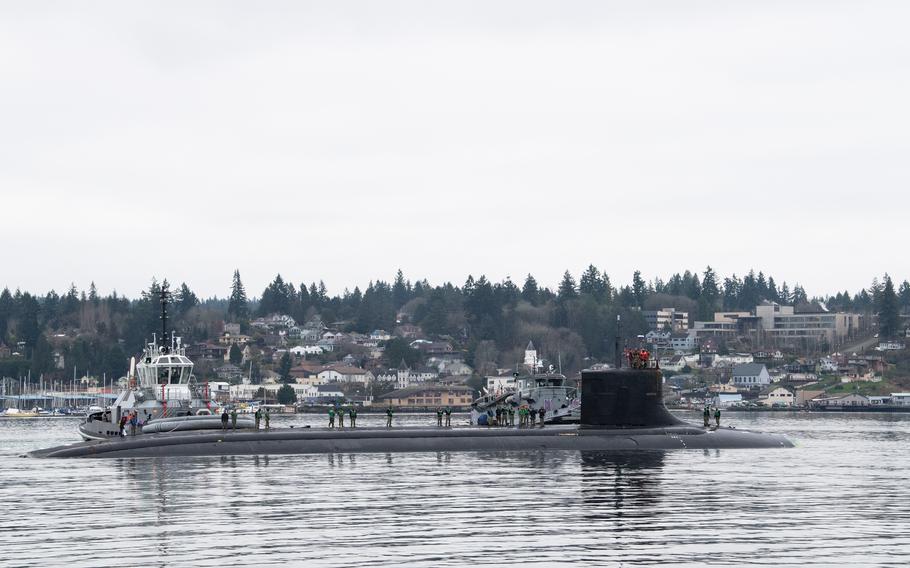 The Seawolf-class, fast-attack submarine USS Connecticut returns to its homeport in Bremerton, Wash., on Dec. 21., 2021, following a scheduled deployment in the U.S. 7th Fleet area of operations. (Sophia Brooks/U.S. Navy )

WASHINGTON — Poor navigational planning, management and watch-team execution led to the USS Connecticut’s underwater crash in October, according to a Navy investigation that recommended punishment for several of the submarine’s leaders and crew.

“This mishap was preventable,” Rear Adm. Christopher Cavanaugh wrote in the investigation’s report, which was released Monday. “Prudent decision-making and adherence to required procedures in any of these three areas could have prevented the grounding."

As director of Pacific Fleet’s maritime headquarters, Cavanaugh led the investigation, which analyzed what caused the submarine’s collision with an undersea mountain that injured 11 sailors and damaged the Seawolf-class submarine’s ballast tanks and sonar sphere, according to the Navy.

Ballast tanks help provide a submarine’s buoyancy, while sonar spheres allow sailors to sense what is around them in undersea waters.

The submarine, which is based in Bremerton, Wash., was operating “in a poorly surveyed area in international waters” in the South China Sea when it ran aground, according to the report.

The report found in the time before the Oct. 2 crash, the navigation review team “failed to identify and properly mark at least ten charted hazards to navigation in the vicinity of the grounding” before sending the submarine through the waters.

“The [team], including the [commanding officer], incorrectly assessed that Connecticut would be operating in an open ocean environment,” the report found. “They should have recognized the ship would be in restricted waters based on the planned track passing near multiple navigation hazards.”

“Had they done so, a modified piloting party would have been stationed with additional watch-standers focused on navigation safety,” the report added.

While much of the investigation’s details are redacted in the report, it indicated at least some of the crew’s watch-standing team were aware that something was amiss on the navigational chart, but the information was not communicated effectively.

Before the crash, at least one sailor detected sonar readings were not matching the navigational chart of the undersea area. However, the officer of the deck did not report the hazard to the Connecticut’s commanding officer, who was not standing duty at the time.

“The CO was unaware of the ship’s proximity to the navigation hazard,” the report said. “The [officer of the deck] stated he was concerned with the shallower-than-expected soundings but that he did not assess a need to take aggressive action … [or] consider ordering a lower speed.”

Most other details of what happened in the minutes before the grounding were redacted, but Cavanaugh wrote there were other factors that led to the incident.

“No single action or inaction caused this mishap, but it was preventable,” he said. “It resulted from an accumulation of errors and omissions in navigation planning, watch team execution, and risk management.”

After the crash, leaders announced the incident and the Connecticut began to sink lower because the ballast systems were damaged, according to the report.

The ship’s leaders then worked on other ways to help the Connecticut rise, which included pumping about 100,000 pounds of water out of the submarine, the report said. However, an electrical fire broke out in one of the pump’s motor controllers, which was soon extinguished.

The commander of Submarine Group 7, which oversees submarine operations in the Indo-Pacific, then ordered the ship to travel to Guam, according to the report. During the trip, the front part of the submarine, known as the bow dome, fell off, but the Connecticut continued its transit, arriving in Guam on Oct. 8.

“Actions immediately following the grounding were effective,” Cavanaugh said in the report. “The crew put the ship in a stable condition on the surface, managed injuries and equipment damage and transited to Guam safely and securely.”

The Navy in November fired Aljilani, Cashin and Rogers “due to a loss of confidence” after the collision.

The submarine is now undergoing repairs and thus “will be unavailable for operations for an extended period of time,” according to the report, which did not detail the cost of the repairs.