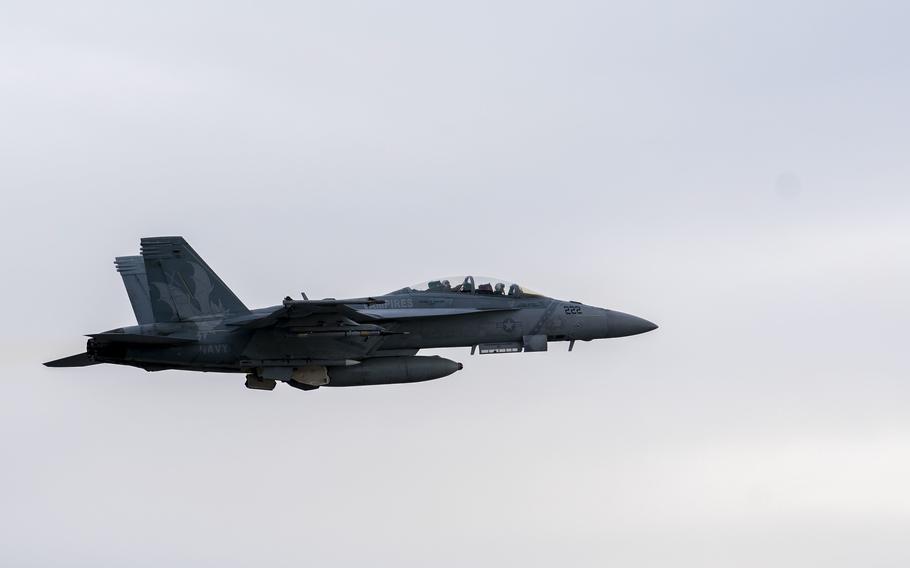 A U.S. Navy EA-18G Growler assigned to the “Garudas” Electronic Attack Squadron 134 takes off from the flight line at Joint Base Elmendorf-Richardson, Alaska, May 4, 2021, in support of Northern Edge 2021. (Adriana Barrientos/U.S. Air Force)

WASHINGTON — About 240 sailors and six Navy EA-18G Growlers will arrive in Germany on Monday as Russia’s war in nearby Ukraine drags on, chief Pentagon spokesman John Kirby said.

The troops and electronic attack aircraft will deploy from Naval Air Station Whidbey Island, Wash., to Spangdahlem Air Base in Germany, Kirby said.

“This is in order to bolster readiness, enhance NATO’s collective defense posture and further increase air integration capabilities with our allied and partner nations,” he said Monday.

The 240 troops, who belong to Electronic Attack Squadron 134 in Washington, will join the more than 100,000 U.S. service members in Europe, Kirby said. About 14,000 of the 100,000 troops deployed to the region in the past two months in response to Russia’s continued attack on Ukraine.

The Growlers are fighter aircraft specially equipped with radar-jamming and other electronic-attack capabilities to disrupt enemy communications and more, according to the Navy.

“These Growlers … are equipped for a variety of missions, but they do specialize in flying electronic warfare missions, using a suite of jamming sensors … to conduct suppression of enemy air-defense operations,” Kirby said.

The aircraft will not be used on Russian forces in Ukraine, in accordance with President Joe Biden’s commitment not to send U.S. troops to fight Russia directly in the besieged country. Instead, they will fly missions to act as a deterrent to keep Russia from attacking NATO countries, Kirby said.

“They are not being sent because of some sort of acute threat that was perceived or some specific incident that happened. They are being deployed as we have said all along, the [Defense] Secretary [Lloyd Austin] wants to keep options open,” he said.

The U.S., as a NATO member, must come to the defense of other countries in the alliance if attacked, according to NATO’s collective defense clause.

“This was deemed to be an additional move that could continue to bolster our and reinforce our defenses on the eastern flank,” Kirby said. “Nothing more should be made out of it than a prudent decision to continue to reevaluate our force posture on NATO’s eastern flank.”

The troops and associated Growlers will be deployed temporarily, Kirby said, but a return date has not been established.