Biden visits US troops in Poland, says democracy, not just Ukraine, at stake 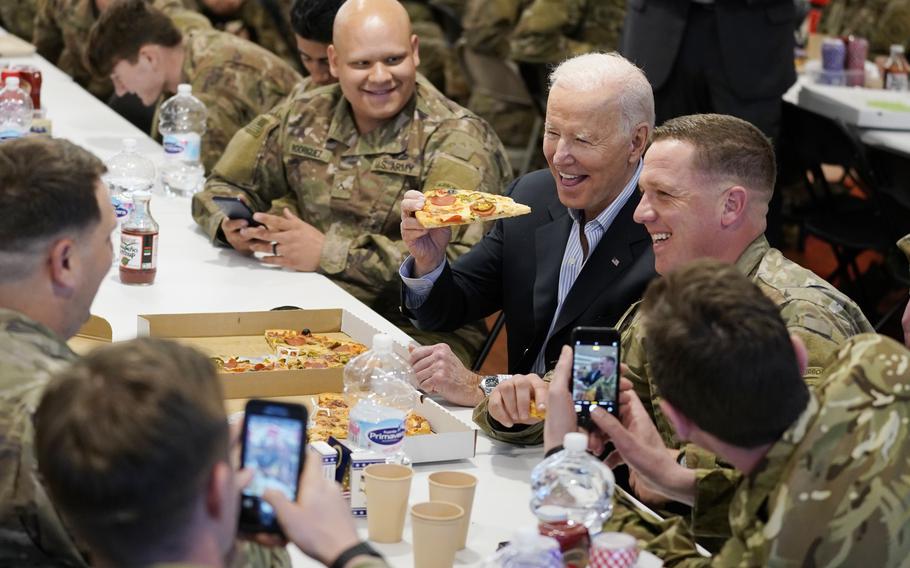 WASHINGTON – President Joe Biden told U.S. troops in Poland on Friday that the future of democracy in the world hangs in the balance as Russia continues its month-old war on Ukraine.

Speaking with members of the 82nd Airborne Division deployed to Rzeszow, Poland, Biden said the international community is at “an inflection point” as autocratic nations such as Russia and China threaten the post-World War II world order.

Biden spoke to the troops a day after meeting with NATO leaders in Brussels about Russia's war on Ukraine.

The 82nd Airborne troops deployed to Poland during the past two months to protect NATO’s eastern flank and help care for Ukrainian evacuees who fled to escape the fighting in Ukraine.

However, Biden said their mission there “is much more than just whether or not you can alleviate the pain and suffering of the people of Ukraine.” 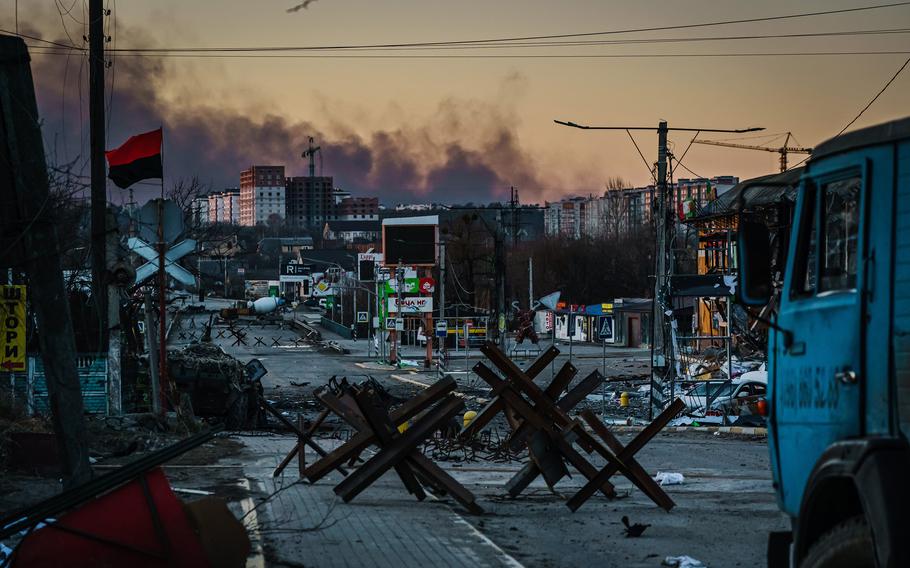 A view of areas near the front line where Ukrainian forces have been battling Russian forces in Irpin, Ukraine, on Thursday, March 10, 2022. (Marcus Yam/Los Angeles Times/TNS)

“What's at stake is: what are your kids and grandkids going to look like in terms of their freedom?” he said. “The last 10 years, there have been fewer democracies that have been formed than we've lost in the world.”

Biden said democracy is also threatened by China, which the Pentagon has labeled as the U.S. military’s biggest challenge. He said Chinese President Xi Jinping told him “Democracies can’t succeed in the 21st century.”

“The reason is things are moving so fast, change is happening so quickly that democracies require consensus, and we can't put together consensus as quickly as autocrats can,” Biden told the 82nd Airborne soldiers.

The troops in Poland are among the more than 12,000 sent from the U.S. to Europe in response to Russia’s invasion. Their deployment increased the number of U.S. forces in Europe to more than 100,000, an amount that Biden said, “We haven’t had in a long, long time.”

“You are the organizing principle around which the rest of the world – the free world – is moving,” he said. “You’re in the midst of a fight between democracies and oligarchs.”

Yet Biden refuses to send U.S. troops into Ukraine to fight Russian forces. As the war enters its fifth week, Russia is now focusing more of its war efforts on the region of Donbas in eastern Ukraine after forces stalled for weeks in an attempted advance on the capital Kyiv, a senior U.S. defense official said Friday.

Russian forces around Kyiv are now “digging in,” taking defensive positions outside the capital city instead of attempting to trudge forward as a fierce Ukrainian resistance continues to keep them at bay, the official said.

“It appears that the Russians are, at least for the moment, not pursuing a ground offensive toward Kyiv,” the official said. “They don't show any signs of being willing to move on Kyiv from the ground.”

The Donbas region in eastern Ukraine is where Russia recognized the independence of two separatist cities – Luhansk and Donetsk – days before the invasion, the official said.

A Russian military official in an address Friday claimed the main objective of the mission had always been to separate Donbas from Ukraine.

"The combat potential of the armed forces of Ukraine has been considerably reduced, which makes it possible to focus our core efforts on achieving the main goal -- the liberation of Donbas,” said Sergei Rudskoi, leader of the Russian General Staff’s main operational directorate.

Heavy fighting is ongoing there as Russian forces attempt to gain control of the region to use it as a bargaining chip in future peace talks, the U.S. official said.

“We think they are trying to not only secure some sort of more substantial gains there as a potential negotiating tactic at the table, but also to cut off Ukrainian forces in the eastern part of the country,” the official said.

In the early weeks of the invasion, Russia had made the most progress in southern Ukraine. But that might be changing, as Russian troops have since lost control of Kherson – the first Ukrainian city that they captured, the official said.

“It doesn't appear to be as solidly in Russian control as it was before,” the official said. “Ukrainians are trying to take Kherson back and we would argue that Kherson is actually contested territory again."

On Friday, the Ukraine Foreign Ministry said on Twitter that 16,100 Russian troops have died in the war, but the U.S. cannot verify that estimate.

But the U.S. official said Russia has lost “about 10% to 15%” of the combat power – including troops and equipment – that it initially deployed for the invasion.

Russia for the first time appears to be adding more troops to the fight aside from the initial 170,000 or more that Russian President Vladimir Putin spent months amassing along Ukraine’s borders with Belarus and Russia before the invasion, the U.S. official said.

“We've seen our first indications that [the Russians] are trying to send in some reinforcements from Georgia,” the official said.

The troops coming from Georgia are Russians, but the U.S. does not know how many of them have moved into Ukraine so far, the official said.

In nearby Berdyansk, Ukrainian forces blew up a Russian warship on Thursday after Russia gained control of the city days before, the official said.

"It's clear that at least one thing [Russia was] trying to do was use the port there in Berdyansk as a resupply depot for their fight up near Mariupol."