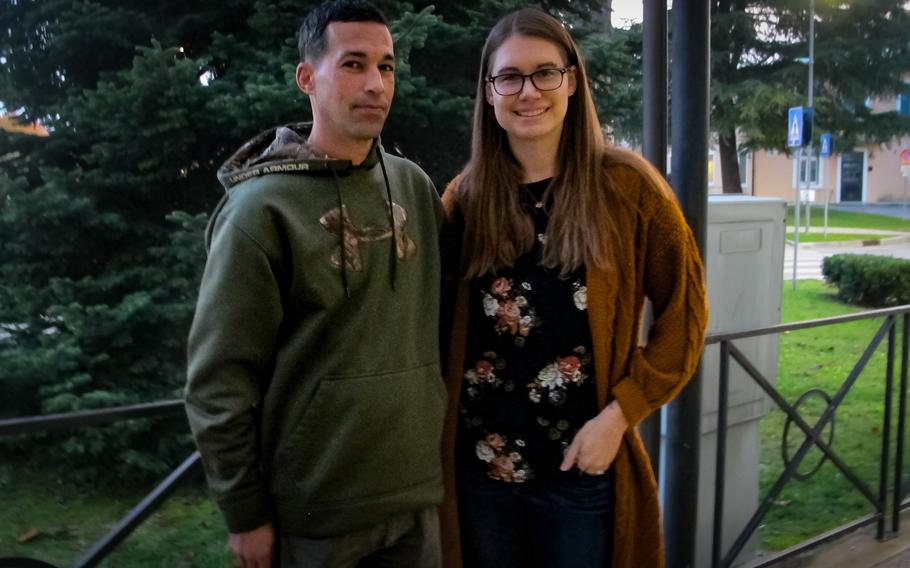 U.S. Army Sgt. 1st Class Michael Hardgrove and his wife, Mallory Hardgrove, at Caserma Ederle in Vicenza, Italy, told officials at a town hall meeting on Nov. 21, 2022, that they're concerned about their upcoming gas and electricity bills. Utility rates have skyrocketed in the country over the past year. (Nancy Montgomery/Stars and Stripes)

VICENZA, Italy — The Hardgrove family caulked the windows and even covered them with plastic sheeting in a bid to save on soaring energy costs.

They set the thermostats between 59 and 64 degrees Fahrenheit.

"We ordered another sweater for the dog," said Mallory Hardgrove, an Army spouse.

Still, she and her husband, Sgt. 1st Class Michael Hardgrove, are "a little bit freaking out," she said at a garrison town hall meeting Monday, about how much it will cost to heat their home this winter.

"We'll be out of pocket thousands of dollars," she said.

The family of five had paid $1,500 for January and February in a combined bill, Mallory Hardgrove said at the meeting.

That was before energy costs in Italy exponentially increased in the wake of Russia’s full-fledged invasion of Ukraine, which necessitated the Hardgroves’ conservation measures in order to avoid paying more. But those measures may not be enough if temperatures plunge, they said.

Garrison officials suggested a variety of strategies to minimize energy costs, such as using appliances only before 7 a.m. and after 7 p.m., when costs are lower, and joining an energy tax-reduction program.

The Hardgroves said they were already taking those steps.

The budget crunch is being felt by service members throughout Italy, who earlier this year received a 22% increase in the monthly off-base allowance for utilities and maintenance.

However, prices have gone up much more than that in the country, which includes Navy bases in Naples and Sicily as well as Aviano Air Base and other installations.

Speakers in the audience at Monday’s town hall, the first since Maj. Gen. Todd Wasmund took command of the Southern European Task Force, Africa in July, asked why their allowances had not been increased to reflect rising energy costs.

Earlier this month, U.S. Army Europe and Africa, along with other major commands, asked service members for documentation showing the price increases in a bid to get the Pentagon to agree to an early allowances increase. A decision has yet to be made.

At Ramstein Air Base in Germany, families have been moving on base to escape the higher rates.

But more on-post housing in Vicenza is unavailable because the garrison is in the midst of major renovations. Army-leased rentals, in which the Army pays for utilities, are scarce.

Complicating the Hardgroves’ financial situation was another perennial topic of town hall meetings: Italian law makes it impossible in most cases for U.S. military spouses to work anywhere except on base, and many of those jobs aren’t open to them.

"It's a double whammy," said Hardgrove, a certified English teacher.

Wasmund agreed that the employment restriction is “one of the most frustrating issues that our families face.”

Gomlak added that the problem is "at echelons so far above us," before making a pitch for on-post jobs, many of which are in child care or recreation.