Sexism and the SOFA: How a 71-year-old US military treaty and Italy’s rules derail women’s careers 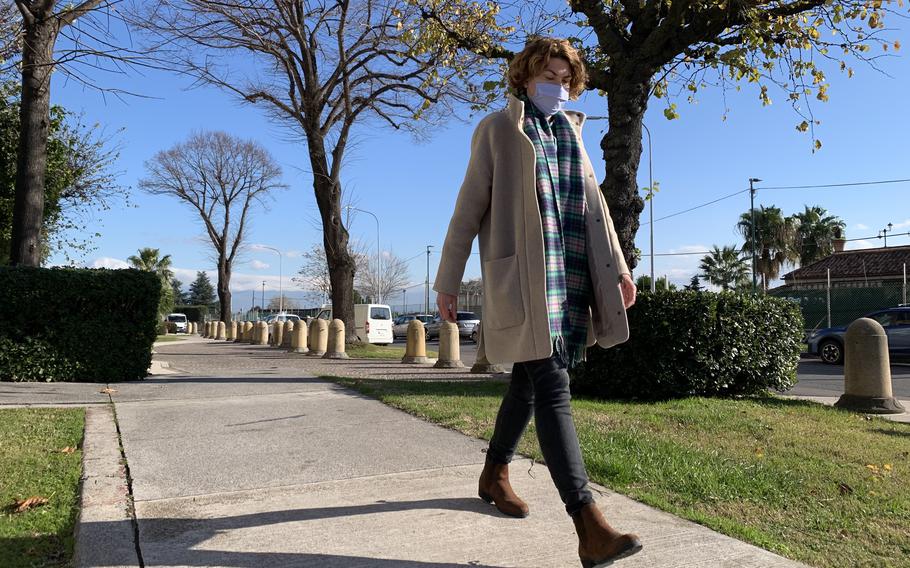 Rebecca Armbrister, who is married to a U.S. sailor assigned to Naval Support Activity Naples, walks during her lunch break at the base's Capodichino site on Dec. 16, 2021. Armbrister considers herself lucky to find a full-time job on base that suits her skills. But Armbrister says she knows many military spouses who don't have that opportunity. (Alison Bath/Stars and Stripes)

NAPLES, Italy — Samara Sloan turned down a shot at a lucrative investment banking job because a U.S.-NATO military treaty first written in 1951 makes no provision for her to legally work while her husband serves in the Navy.

“That was a huge opportunity that I had to turn down with a very good salary,” said Sloan, who received the potential offer after moving to Naval Support Activity Naples in 2020. “It was a huge financial hit to my family.”

Sloan didn’t have much choice. Italian law makes it practically impossible in most cases for military spouses and children living in the country under the NATO Status of Forces Agreement to work anywhere except on base — and many of the jobs there aren’t open to them.

The agreement was written in an era when women were largely expected to stay home.

As time went on, supplemental agreements between the U.S. and NATO’s member countries addressed taxes, driving privileges and other issues related to U.S. military personnel in a foreign country. But they generally avoided rules on military dependent employment.

The last time the U.S. and Italy agreed on a supplement to the SOFA was 27 years ago, again without addressing employment.

Military spouse unemployment has been acknowledged as a problem by the services for decades, due in part to the nature of two- and three-year tours.

The problem affects many dependents, regardless of age or gender. But it disproportionately affects women, who make up 92% of the military spouse community, a July 2020 Deloitte Insights report stated.

And among the larger overseas military communities, Italy is arguably the toughest place for a spouse to be legally employed. Even teleworking for a U.S. company is technically illegal, if sometimes overlooked.

Italian law requires military dependents to give up their SOFA rights and protections if they want to work for a private American, Italian or other employer while living in Italy. Had Sloan taken the job, she would have been forced to give up her SOFA status, return to the U.S., wait for an Italian work visa and permit, and then pay Italian income taxes.

“The agreement does not exempt family members of “the Force” (DoD civilians and active-duty service members) from Italian work visa requirements and paying taxes in the host nation to which they’re assigned when they are involved in non-duty related employment,” Morgan Gilliam, U.S. Navy Europe Africa Central spokeswoman, said in a statement.

For Sloan and other military dependents, the fallout from that inability to work is acute, ranging from under- or unemployment to resume gaps, financial instability, mental health issues and other impacts that negatively affect their lives and the well-being of their families, experts say.

Financial insecurity and unfulfilled career or personal aspirations for spouses have “a direct impact on the retention of skilled service members,” the 2020 Deloitte report said.

It’s difficult to determine how many people like Sloan are impacted by NATO SOFA-related employment restrictions. But with a U.S. military community of 15,020 active duty service members, reservists and Defense Department civilians in Italy, advocates say it’s a common problem. 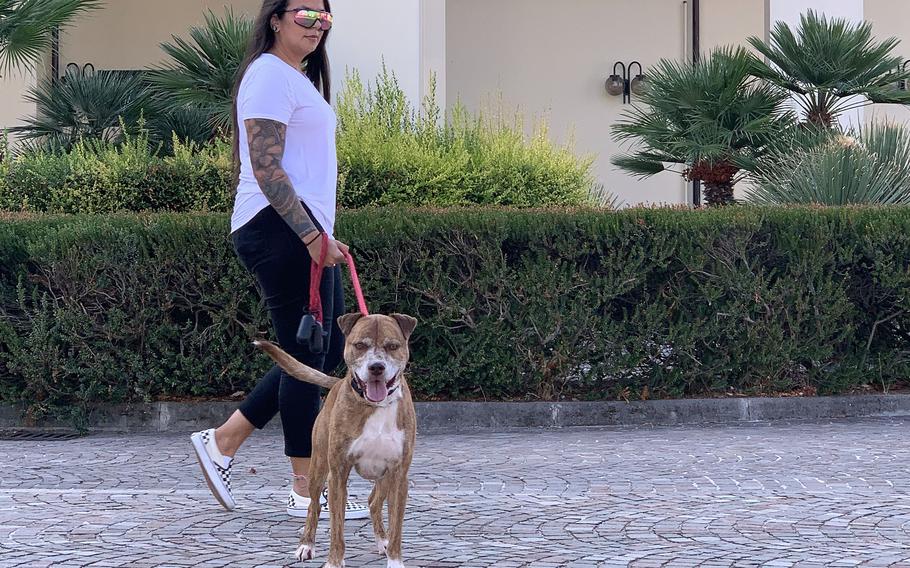 Jessica Olsen, 34, walks her dog, Thor, on the U.S. Naval Support Activity Gricignano di Aversa site in September 2021. Olsen, a meteorologist, wanted to telecommute during her stay in Italy, but the 71-year old NATO Status of Forces Agreement and Italian law won't allow her or other military dependents to work off-base, unless they give up the rights and protections afforded them through the agreement. (Alison Bath/Stars and Stripes)

But unemployment for military spouses continues to hover around 22-24% and likely increased following the COVID-19 pandemic, Goodale said.

Goodale and others would like to see the NATO SOFA and supplemental agreements reviewed and revised to accommodate more job options, such as telecommuting for a U.S. employer. But that process could open an entire document for review, resulting in changes that extend beyond the employment issue.

“Because there are so many potential ramifications, this needs to be done thoughtfully and deliberately,” Goodale said.

The decades-old NATO SOFA sets the rules, rights and responsibilities by which member countries, such as the U.S., Germany, Italy and others, may keep troops in another country.

While the pact impacts the conditions under which military dependents may get jobs, it doesn’t directly address employment, according to a November 2019 research paper from the Institute for Veterans and Military Families at Syracuse University.

For example, U.S. military dependents living in Germany may work for a German or other employer without losing their SOFA status in most cases. Spouses similarly may work in South Korea or Japan, but varying requirements, such as acquiring a work permit, must be met.

In Italy, those who want to work and keep their SOFA status are limited to on-base jobs, which frequently are lower-paying positions in retail, child care or recreation.

“Because each SOFA was constructed with an individual nation, there is no specific explanation as to why some countries make it more difficult for military dependents to work,” Goodale said. “The agreements were established decades ago and often included an intent to protect host-nation citizens and their employment opportunities.”

‘You have to set a bar for yourself’

Over the last 7 1/2 years, Jessica Olsen and her husband, a Navy sailor, have moved four times, including to NSA Naples.

Each move has meant an exhaustive and, sometimes, demoralizing effort to find a job suited for Olsen’s education, experience and skills.

At NSA Naples, Olsen eventually received two job offers for work at the child development center and one for a position at the gym. She turned all three down, realizing that she wouldn’t be happy working in an environment where her knowledge and skills weren’t fully used.

“You have to set a bar for yourself as to what your self-worth is and I do,” the 34-year-old meteorologist and private pilot said. “When I look for a job, I do value my self-worth but I also value what I can bring to that job.” 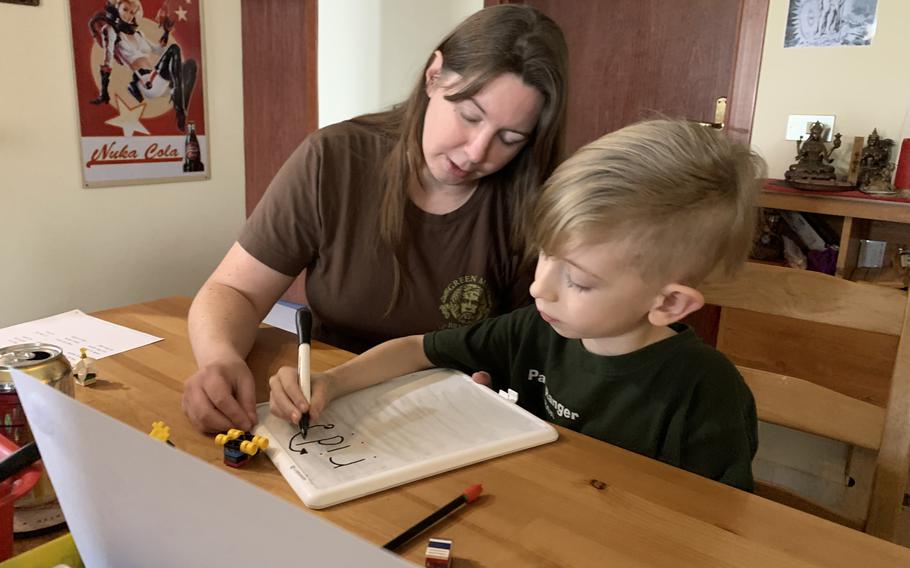 Andrea Gill, who home-schools her two children, works on a language arts problem with her son, Ren, at the family's apartment at Naval Support Activity Naples Support Site in Griciagnano di Aversa on Thursday, Dec. 9, 2021. Gill is unemployed while her husband serves his Navy tour in Italy. She is unable to work in her chosen career field teaching English as a second language due to laws that generally restrict U.S. military dependents to on-base employment. (Alison Bath/Stars and Stripes)

It wasn’t until she arrived in Naples that Andrea Gill discovered her hope to teach English to Italians living in the Naples area wasn’t possible unless she gave up her SOFA status. That wasn’t an option, since on-base housing and commissary access were among the benefits she would have lost, Gill said.

Gill accepted a full-time position working in the toddler room at NSA Naples’ child development center. But the job wasn’t a good fit and she ultimately quit.

“I’ve put the time in to get a degree. That’s like six years of education I’m basically not using,” said Gill, who holds a master’s degree. “I feel like my skills are going down.”

Part of the difficulty for the thousands of spouses in Italy is that there aren’t many jobs for U.S. workers on base.

At NSA Naples, 56% of the 1,445 occupied full-time positions funded through appropriated funds are filled by Italian citizens. Appropriated fund jobs vary in salary and responsibility, but they include professional and career-oriented positions.

The remainder are filled by U.S. citizens, and of those, 185 are spouses. There were another 83 vacant jobs open to U.S. citizens, base figures showed in November.

The base also employs 136 people full-time through the non-appropriated fund, or NAF, excluding the Navy Exchange and Naval Criminal Investigation Service. Of those, 57% are held by U.S. citizens, with more than half of those positions held by active-duty dependents. There were 21 vacant NAF positions available to all U.S. citizens, according to the November data.

“Making sure our spouses and dependents have the resources and opportunities they need to continue working is a priority for us,” said Gilliam, who noted that Navy family support centers offer information, such as search strategies and resume writing, for job seekers.

Rebecca Armbrister considers herself lucky. Not long after she and her active-duty husband arrived in Naples, she got a job that was similar to the work she did in the U.S. But Armbrister said she knows many highly skilled spouses who can’t get jobs on base.

“That just bothers me,” said Armbrister, who wants base officials to take a more holistic approach to hiring, such as looking beyond a resume job title and seeing how skill sets can be used in a variety of positions. “There’s a lot of talented and educated people here who want to work and sometimes they just need an opportunity.”

Jessica Smith, the spouse of a Navy retiree, said she has seen the same problems play out for many families over the years she has been in Naples. They struggle with paying bills and saving for the future on a single income. Some have faced dire marital problems, she said.

Smith would like to see the U.S. military make it a priority to renegotiate employment restrictions and enable more off-base opportunities for military dependents in Italy.

“It’s an issue that impacts everyone and can have really severe consequences,” Smith said. “It’s also not clear to me why it can’t be updated.”

“A Portability Roadmap for Military Spouses and their Employers” is a 31-page research paper that includes information about the NATO Status of Forces Agreement as well as details about supplemental agreements and treaties. The paper includes a look at the rules impacting military spouse employment and SOFA status, income taxes and other effects of working in Germany, Brussels, Italy, Japan and South Korea. The paper also offers military spouses and their employers a guide of questions they should consider and steps needed to facilitate their decision-making process when it comes to employment while on an overseas military assignment.