Fort Hood soldier arrested in connection with multiple sexual assaults, including one involving a gun 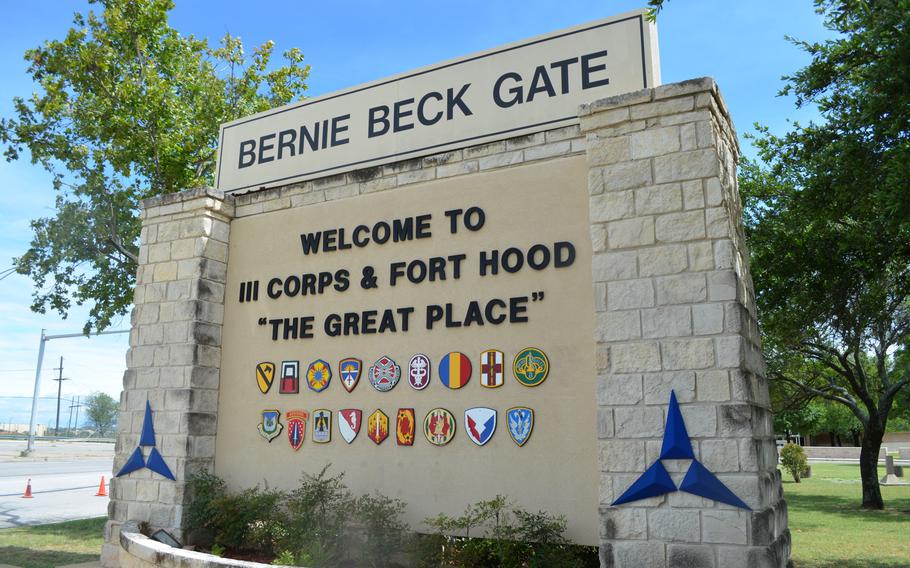 The Army Criminal Investigation Division said service agents arrested a 29-year-old Fort Hood soldier on suspicion that he has sexually assaulted multiple soldiers at the Texas Army base. (Rose L. Thayer/Stars and Stripes)

AUSTIN, Texas — A 29-year-old Fort Hood soldier has been detained on suspicion that he has sexually assaulted multiple other soldiers at the Army base, including an attack involving a gun, according to service officials.

The soldier, who is assigned to the 62nd Engineer Battalion, 36th Engineer Brigade, has not been identified because he has not yet been formally charged, base officials said Thursday.

He was arrested Oct. 2 while entering a gate at Fort Hood and is being held in pre-trial confinement, according to Maria Thomas, the special agent-in-charge of the Army Criminal Investigation Division’s central Texas field office.

A text alert was sent to soldiers living near the intersection of Legends Way and 37th Street at Fort Hood at about 12:44 p.m. on Oct. 2, informing them that a male suspect with a gun was in the area. The text asked for soldiers to “shelter in their rooms” or “stay away from the area.”

At about 2:19 p.m., another text message told soldiers that the suspect had been arrested.

Investigators noticed commonalities among unresolved cases in July, but couldn’t definitively link the crimes at the time, according to a statement from CID. The agency declined to answer questions about how many cases might be connected to the detained soldier or how long the soldier was targeting other soldiers on the base. CID officials said they would not provide further information because the investigation is ongoing.

Fort Hood soldiers living in barracks located near 37th Street and Legends Way, such as this one at the Texas Army base photographed in August, were asked to shelter in place at the base on Oct. 2 because an armed attack had occurred in the area. A 29-year-old Fort Hood soldier was later arrested and is suspected of having sexually assaulted multiple soldiers dating back to at least July, according to criminal investigators.  (U.S. Army photo)

“Fort Hood and III Armored Corps will continue to implement initiatives begun over the last 18 months to ensure a safe and secure environment for all of our soldiers, family members and civilians at Fort Hood,” said Lt. Gen. Sean Bernabe, who took command of Fort Hood last week. “We are thankful for the hard work of the Criminal Investigation Division and the soldiers who assisted in apprehending this suspect.”

Some of the initiatives that officials credited to helping them arrest the suspect included safety briefings, education on how and when to report suspicious activity, women’s self-defense classes, command directed inspections of barracks to ensure proper safety equipment and procedures and the implementation of various investigative tools. They declined to offer further details on exactly how these initiatives were helpful.

Fort Hood began these efforts following the disappearance and death of Spc. Vanessa Guillen in April 2020. Investigators have said she was killed on base by a fellow soldier and then buried near a river outside of Fort Hood.

After her death, the Army launched an external review of Fort Hood. The Fort Hood Independent Review Committee released its report in December 2020 with 70 recommendations to improve conditions for soldiers at the base, as well as changes to overhaul Army CID and the Sexual Harassment/Assault Response and Prevention program.

So far, the Army has completed 65 of the recommendations, the service said.

“We continue to work with leaders throughout Fort Hood to build on safety awareness and we will pursue any incidents of sexual assault,” Thomas said. “Army CID thoroughly investigates every report of alleged felony-level sexual misconduct and follows every lead available.”