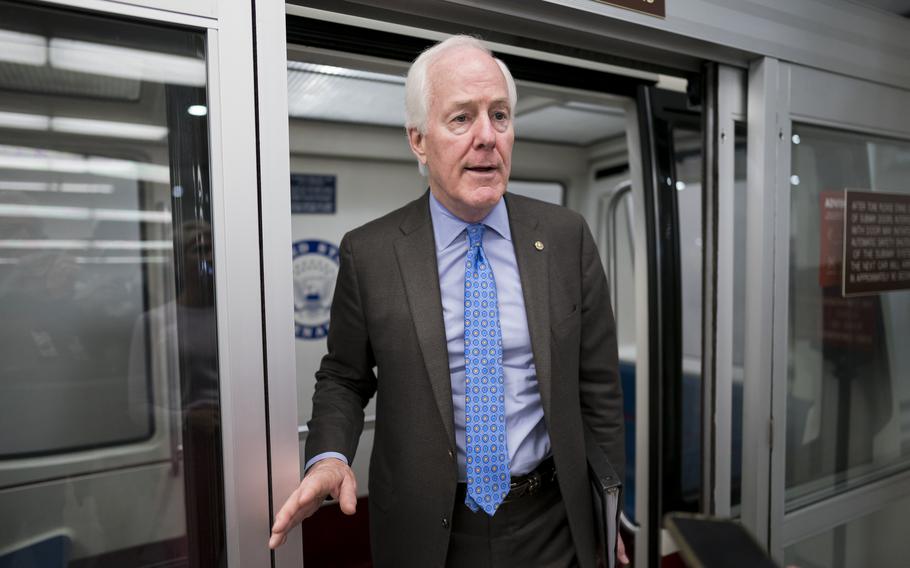 In this May 26, 2021, photo, Sen. John Cornyn, R-Texas, speaks to reporters at the Capitol in Washington. Each military service branch must conduct a review of how it handles missing persons reports as part of the 2022 National Defense Authorization Act. Cornyn said he introduced the legislation to prevent future tragedies “by requiring updates to military installation security procedures and by focusing on stronger partnerships between installations and law enforcement.” (J. Scott Applewhite/AP)

Each military service branch must conduct a review of how it handles missing persons reports as part of the 2022 National Defense Authorization Act. The call for the review stems from missing soldier cases and deaths that occurred at Fort Hood, Texas, in 2020 and exposed faults in existing policy.

Sen. John Cornyn, R-Texas, said he introduced the legislation to prevent future tragedies “by requiring updates to military installation security procedures and by focusing on stronger partnerships between installations and law enforcement.”

The legislation, which was signed into law by President Joe Biden on Monday, puts the reviews down at the local base level where the picture and need is most clear, according to the senator’s office.

“We must defend the brave men and women who put their lives on the line for our safety at home and abroad,” Cornyn said in a statement. “As a parent and the son of a veteran, I’m grateful to my colleagues and the administration for partnering with me in protecting our nation’s servicemembers.”

The statement cited the deaths of Spc. Vanessa Guillen and Sgt. Elder Fernandes as examples that show the need for improvement. Both soldiers were reported missing out of Fort Hood and later found dead.

Guillen, 20, went missing from Fort Hood on April 22, 2020, while working in an arms room. Her remains were found more than two months later alongside a river about 30 miles from the base. Investigators determined she was killed by a fellow soldier who later killed himself.

Fernandes, 23, was found dead Aug. 25, 2020, in Temple, Texas, after a weeklong search for him. Records from Army Criminal Investigation Division revealed Fernandes had been missing for 48 hours before anyone contacted investigators.

They were just two of 35 soldiers who died while assigned to Fort Hood in 2020. Of those soldiers, five died by homicide and 12 died by suicide. It’s unclear how many of those soldiers were also considered missing before they died.

For its part, the Army has already undergone an in-depth review and made changes to the way it handles reports of missing soldiers. It announced in December 2020 that it created a new category for soldiers who do not show up for duty. Instead of immediately being classified AWOL, they are classified as “absent-unknown,” and commanders must launch an immediate effort to find the missing soldier.

The policy can already be seen in effect with Army bases releasing public calls to help find missing soldiers more often. In at least two instances in the past year at Fort Hood, the releases brought soldiers back safely to base.

Cornyn’s legislation will ensure all service branches are doing the same work.

All reviews are due back to the service’s installation command, which will give the Pentagon a better understanding of some best practices that could be expanded, according to Cornyn’s office. From there, defense officials could begin to develop policies and implement methods to strengthen coordination efforts.

There is no timeline included for the reviews, but Congress could require one, if necessary, according to Cornyn’s office.