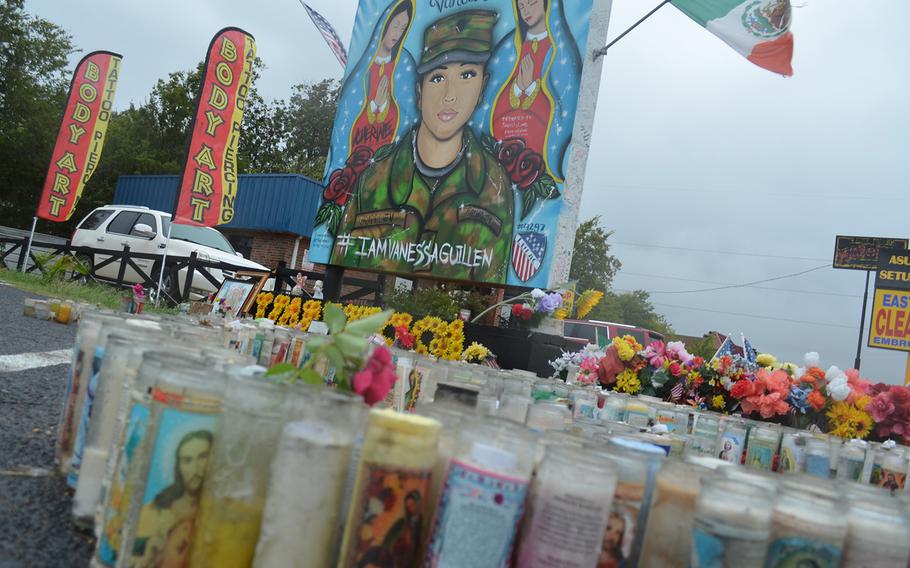 Buy Photo
Sen. Kirsten Gillibrand, D-N.Y., on Monday filed an amendment to the National Defense Authorization Act — annual legislation that lays out the nation’s defense policies — that could be added to the final version for fiscal 2022 if it passes in early November. (Stars and Stripes)

AUSTIN, Texas (Tribune News Service) — The family of slain U.S. Army Spc. Vanessa Guillen, who have been fighting for reforms in how the military handles sexual assault and harassment, inched closer this week to their goal of taking investigations of such cases outside a soldier’s direct chain of command.

U.S. Sen. Kirsten Gillibrand, D-N.Y., on Monday filed an amendment to the National Defense Authorization Act — annual legislation that lays out the nation’s defense policies — that could be added to the final version for fiscal 2022 if it passes in early November.

The amendment would allow military victims of sexual assault or harassment to file a claim and receive monetary compensation if their cases were mishandled, according to Guillen family attorney Natalie Khawam.

Khawam said she pushed for Gillibrand to add the amendment at the last minute so it could potentially be included to the final version of the defense bill and help the Guillens finally find a form of justice.

“Senator Gillibrand filed an amendment to include claims that will provide our soldiers relief, as they need and deserve recourse just like any victim of sexual misconduct,” said Khawam, who has represented the Guillen family pro bono since shortly after the

Fort Hood soldier’s death in April 2020. “Without recourse, there is no teeth in this legislation, and thereby there will be no accountability.”

Active-duty soldiers currently cannot sue the Defense Department for pain and suffering if they are victims of sexual crimes. The same is true for families like Vanessa Guillen’s, who cannot receive monetary compensation for the death of their loved one or the sexual harassment she received.

What happened to Vanessa Guillen?

In late April, a year after Guillen’s disappearance, Army leaders first confirmed that Guillen, 20, was sexually harassed and subjected to retaliation at Fort Hood, as her family had consistently alleged.

Authorities suspect another Fort Hood soldier, Spc. Aaron Robinson, beat Guillen to death with a hammer in an armory room on post the morning of April 22, 2020. Robinson fatally shot himself July 1, 2020, as authorities sought to question him, according to Killeen police.

However, Army leaders says it was another noncommissioned officer, whom they declined to identify, who sexually harassed Guillen.

Regardless, the Guillen family for more than a year have pushed for new legislation that would allow outside investigators to look into claims of sexual crimes among soldiers. The legislation initially was called the I Am Vanessa Guillen Act as a nod to the viral social media hashtag that service members used online when describing their own experiences as victims of sexual misconduct in the military.

Lawmakers in support of the I Am Vanessa Guillen Act have explained that current Army protocols are flawed and problematic because the investigators are often those in a victim’s direct chain of command and frequently have personal relationships with those accused of a crime and the victim who is reporting it. As a result, victims fear retaliation if those investigators fail to properly investigate without bias.

The I Am Vanessa Guillen Act, however, will no longer be a standalone bill but rather incorporated into the defense bill.

While the I Am Vanessa Guillen Act would take sexual misconduct investigations outside the chain of command, Gillibrand’s amendment would also allow soldiers to receive up to $800,000 in noneconomic damages, and no cap for economic damages, if investigators were negligent or military members failed to protect them from abuse.

Patrick Murray, director of the national legislative service for the Veterans of Foreign Wars, said Wednesday that what the I Am Vanessa Guillen Act set out to accomplish is long overdue, adding that the VFW hopes it will be added to the defense policy bill.

“The I Am Vanessa Guillen Act, the amendment portion to the National Defense Authorization, is something the VFW strongly supports, so we’re doing everything we can to provide a safe environment for the men and women in service and also make sure that justice is done,” Murray said.

The U.S. House and the Senate will conference in late November, selecting the language they want from each chamber’s version of the defense bill. Khawam on Tuesday said the final version will emerge by December.

Mayra Guillen, Vanessa’s oldest sister, fought alongside Khawam this week to have the amendment added to the Senate’s version of the National Defense Authorization Act. On Tuesday, the sister asked everyone to contact their senators and ask them to support the amendment.

“The I Am Vanessa Guillen Act will not only make justice for Vanessa, but for all the victims of sexual misconduct in the military,” Guillen said. “This shift in the process of removing cases from the chain of command will not only make reporting safer for our soldiers, but it will also provide a clearer unbiased path to investigate cases.”

Mayra Guillen said that if the legislation had been in place when her sister needed help, “then she would have been alive today with us and continuing her career in the Army and her life dream to serve her country.”