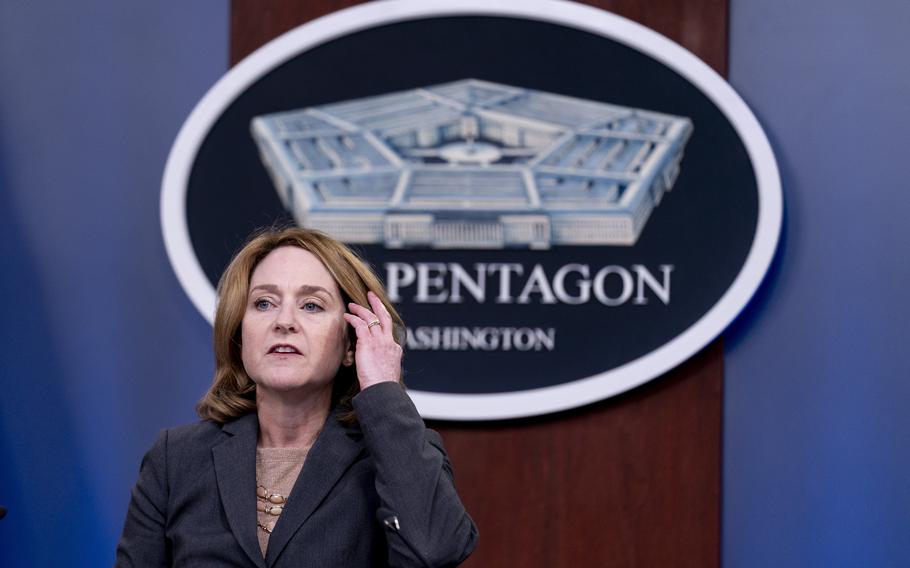 Deputy Defense Secretary Kathleen Hicks speaks during a briefing at the Pentagon on Wednesday, Sept. 22, 2021, to announce the Defense Department will act upon the 90-day commission recommendations on sexual assault and harassment in the military. (Andrew Harnik/AP)

WASHINGTON — The Defense Department’s plan to tackle sexual assault and harassment in the ranks represents the largest attempt ever to impose systemic changes to address the problem across the force, Deputy Defense Secretary Kathleen Hicks told reporters Wednesday at the Pentagon.

The “implementation roadmap” revealed Wednesday comes after an independent review commission established by Defense Secretary Lloyd Austin in February studied sexual assault and harassment in the military for 90 days. On June 21, the commission submitted a report with 82 recommended changes to Austin, who then ordered July 2 that the roadmap be developed.

The Pentagon has already begun implementing its “foundation” that “consists of the most important elements in preventing sexual assault and sexual harassment, and holding offenders accountable,” Hicks said.

“Our goal is to implement as rapidly as possible, while ensuring we can deliver durable and meaningful outcomes,” Hicks said.

The first implementation deadline for the roadmap is Oct. 13, when the undersecretary of defense for personnel and readiness must issue “enterprise-wide guidance for implementing all recommendations,” Hicks said. Each service is also required to develop their own implementation plans and map out their resources before February.

To stay accountable, Austin also ordered the undersecretary to develop a way to evaluate metrics by May 1 and “formally assess the roadmap no fewer than twice per year.”

Still, not all changes will be immediate. One of the key changes is removing prosecuting authority from the military chain of command in cases of sexual assault, domestic violence, child abuse and retaliation. But that will take congressional action to complete, Hicks said.

“We can’t just move quickly but shallowly and have the figment of action without having really well thought-through processes for how we do this,” she said. “The DOD efforts in this space will be the largest ever attempted — no university, no major institution, is at our scale.”

“Recommendations such as the establishment of the offices of special-victim prosecutors represent real cultural and structural shifts for the military departments,” Hicks said.

Unit commanding officers are now tasked with deciding whether a report of sexual assault should be sent to trial, but “only prosecutors have the technical training to make the purely legal decisions that affect victims’ access to justice,” the report stated.

The recommendation to remove sexual assault case decisions from the chain of command was debated by senior officers across the service branches since news of it leaked in April, with some defense leaders worried about giving military commanders less control over their units.

The commission also discovered a link between sexual harassment and sexual assault reports in units. To address the issue, the Pentagon is asking Congress to help make sexual harassment a crime by expanding the Uniform Code of Military Justice, which is the military’s system of laws punishable by court-martial, Hicks said.

While the roadmap is complete, it will still take time to enact several of the changes — especially those involving the UCMJ — because they will require legislation, she said.