WASHINGTON — An independent review commission on sexual assault in the military made 80 recommendations to the Pentagon in a report that found the military is ill equipped to address such crimes properly, according to a report released Friday.

The report, ordered by Defense Secretary Lloyd Austin on Jan. 22, found a “troubling gap” between what senior leaders say about sexual assault and harassment and what junior enlisted troops experience, a senior official for President Joe Biden’s administration told reporters Thursday during a teleconference.

“We have heard for many years that there is no tolerance for sexual harassment and sexual assault,” said the official, who spoke on the condition of anonymity. “But we learned that in practice there is quite a lot of tolerance.”

Commission members spoke with more than 600 subject-matter experts, including “survivors, researchers, former service members, commanders, junior and senior enlisted leaders, and advocates” as part of their research, the official said.

“Junior enlisted members … experienced daily acts of demeaning language and sexual harassment that is ubiquitous in many units — that it's a part of the climate,” the official said. “Women in particular are told this is just what they should expect.”

As the report was released Friday, Austin directed the Pentagon to begin immediately enacting several of its recommendations, including working with Congress to remove prosecuting authority from the military chain of command in cases of sexual assault, domestic violence, child abuse and retaliation.

He also ordered the service branches to standardize nonjudicial punishment, create a separation process for troops with substantiated sexual harassment claims, create career tracks for lawyers and investigators in sexual assault and sexual harassment cases, and criminalize sexual harassment in the Uniform Code of Military Justice, which is the military’s system of laws punishable by court-martial.

“These lawyers are uniquely positioned to assess whether a case is a special victims case, to decide whether and what charges should be preferred, to determine the likelihood of conviction, to engage with other lawyers in plea negotiations, to offer grants of immunity to trial witnesses and to issue subpoenas,” according to the report.

Now, unit commanding officers are tasked with deciding whether a report of sexual assault should be sent to trial, but “only prosecutors have the technical training to make the purely legal decisions that affect victims’ access to justice,” the report states.

Commission members said in their report that a commander’s position within the unit leads to an inherent appearance of a conflict of interest.

Austin further directed the department to work with Congress to create dedicated offices in each service branch to prosecute such crimes.

The recommendation to remove sexual assault case decisions from the chain of command has been hotly debated by senior officers across the service branches since news of it leaked in April, with some defense leaders worried about giving military commanders less control over their units.

“The [commission] rejects the notion that shifting legal decisions about charging someone with a crime or sending that case to trial diminishes the role of commanders,” the commission’s leader, Lynn Rosenthal, told reporters Friday at the Pentagon. “Instead, it enhances their role and places them in the lead of taking care of their people, which is their No. 1 job, and creating climates of real no-tolerance.”

Biden said he “strongly support[s]” Austin’s decision to accept the commission’s “core recommendations,” including the removal of a commander’s discretion in choosing who should be prosecuted in such cases.

“We need concrete actions that fundamentally change the way we handle military sexual assault and that make it clear that these crimes will not be minimized or dismissed,” he said in a statement issued Friday. “They will be prosecuted under the Uniform Code of Military Justice to their fullest extent.”

Biden said sexual assault in the military is “doubly damaging because it shreds the unity and cohesion that is essential to the functioning of the U.S. military and to our national defense.”

The commission also called for an additional study on the victim-advocacy workforce within three months, “with additional implementation within six months,” the official said.

Factors in sex assault and harassment

“We found that victims carry a very heavy burden, and they carry this burden whether they report or not,” the official said. “Many who did report regretted doing so because of what they experienced afterwards [such as] being ostracized, bullied and having trouble accessing quality services.”

Rosenthal said many commanders are simply uninformed about the best practices in handling a sexual assault case “because much of it is not intuitive … [and] it’s hard to recognize that they also are not trained in trauma.”

“With these very well-intentioned commanders, when they step in, they want to take charge,” she said. “And so then they start telling the victim everything that he or she should be doing, and that’s not the right approach either.”

To address this issue, the commission urged “selecting, developing and evaluating the right” commanding officers who “interrupt these behaviors, speak out and show in practice a real no-tolerance.”

“We have to integrate this into the main effort, and track it as a part of readiness,” Rosenthal said. “You have to pay as much attention to this as you do to your broken-down vehicles.”

However, it could take time to enact the changes — especially those involving the UCMJ — and some will require congressional support, the official said.

“There is not an area for quick wins or quick fixes but rather a plan that will result in sustained change over time,” the official said. “We think that investment of time is what will lead to the results. We think that's what will really move the needle.”

In Austin’s directive, he charged Deputy Defense Secretary Kathleen Hicks with developing an “implementation roadmap” for the recommendations. It is due to Austin in 60 days. The plan will help “identify the resources and authorities necessary” to enact the changes, “both in terms of personnel and funding,” Austin wrote.

“This is a profound change for the Department of Defense and really a monumental pivot in how the department does its business,” the official said. 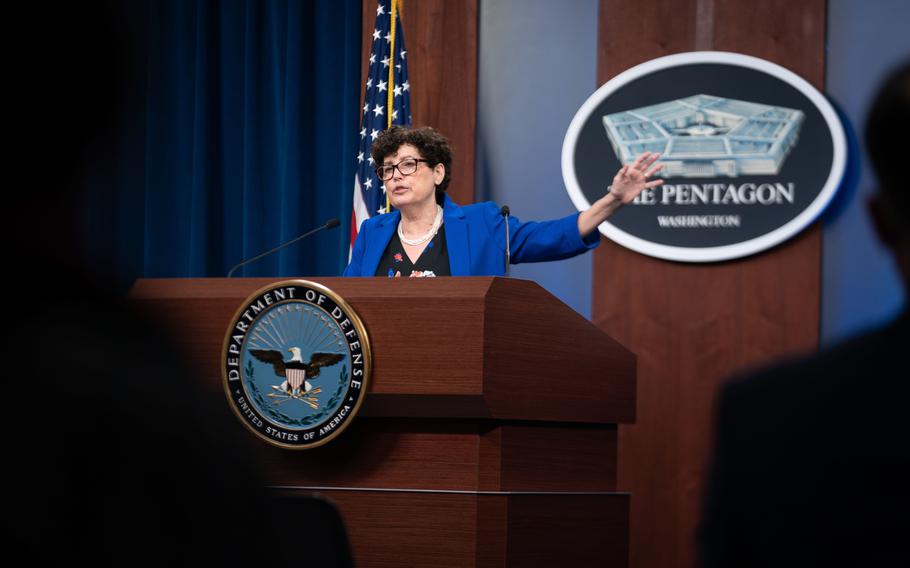