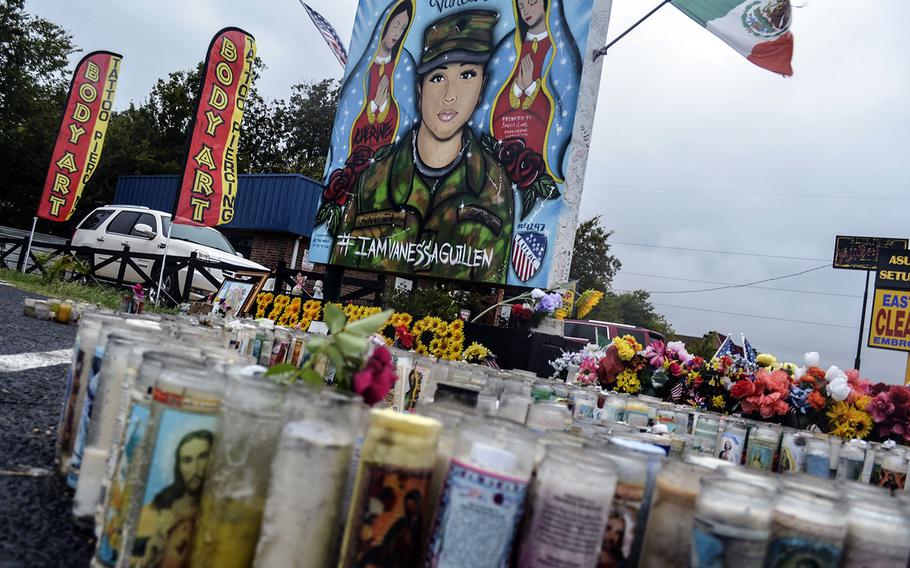 Editor’s note: This story was originally published on May 1, 2021.

AUSTIN, Texas — Spc. Vanessa Guillen faced sexual harassment from a supervisor that changed her outlook on service in the months before her disappearance and death at Fort Hood last year. But the harassment did not come from the soldier believed to have killed her, according to an Army report released Friday.

Guillen, 20, reported being sexually harassed by the senior noncommissioned officer to others, but those leaders failed to take appropriate action. It created “an intimidating, hostile environment,” according to the 264-page report, which contains the findings of an internal administrative investigation, commonly known as a 15-6.

Guillen, a small arms repairer in the 3rd Cavalry Regiment, disappeared during her workday on April 22, 2020. After more than two months, investigators found her body buried along a river miles from the central Texas Army base. Spc. Aaron Robinson, a fellow soldier in the regiment, is believed to have killed her with a hammer in an arms room that he supervised. When confronted by local law enforcement July 1 in nearby Killeen, Robinson shot himself dead.

The 15-6 investigation, announced in September and under the direction of Gen. John Murray, the commander of Army Futures Command, looked into every echelon of Guillen’s leadership between April 22 and July 1 to learn what her leaders knew and when. As part of the investigation, which took place from September to November, more than 150 witnesses were interviewed, and 6,000 emails and 11,000 pages were reviewed.

Guillen’s family has said she told them she was sexually harassed prior to her death, but the soldier was too afraid to report it through her chain of command. Guillen’s unit, the 3rd Cavalry Regiment, announced during the search for her that it would investigate the allegation. That investigation became part of the larger investigation, which was released Friday.

Murray said he found the solicitation was “a significant source of stress” for Guillen, who went from being a “first-term soldier vocalizing and posting about re-enlistment to fantasizing about the expiration of her term of service.”

A different supervisor noticed this change in Guillen and asked about her well-being. Guillen described what happened, and again later to select peers. Two soldiers reported the incident to unit leaders, who failed to initiate an investigation.

In September 2019, the same man harassed her again during a field training exercise. He tried to watch her “conduct personal hygiene” in the woods while checking the unit’s perimeter and then returned to the location where she was a second time.

Guillen “did not feel the encounters were accidental,” Murray wrote.

However, she did not report the encounter during field training. Another soldier said Guillen was “very adamant about not wanting to get in trouble by telling what happened.”

There’s no evidence that she ever filed a report through the Sexual Harassment/Assault Response Prevention program, known as SHARP, but she recounted what happened to several friends and other soldiers. Rumors were also being spread throughout the unit about incidents, according to the report.

The investigation also found Robinson did sexually harass another soldier from April to September 2019. That soldier was not Guillen.

After returning from a nine-month deployment to Iraq, Robinson began texting “unwanted sexual advances” to the victim, whose name was redacted from the report. In the messages, he would ask the victim to come to his room, according to the report.

The soldier eventually blocked Robinson after he texted and asked, “Want to have sex?”

Then the “harassment increased in person,” Murray wrote. Robinson would stare at the victim, and follow the soldier around the unit area “as if stalking.”

Robinson’s victim never reported the harassment, which abruptly stopped about September 2019. Murray learned the victim never reported because they “did not believe proper action would be taken.” The soldier went on to describe a “climate of drunkenness in the barracks and an unsafe environment.”

The command “would not have supported a complaint of sexual harassment against Spc. Robinson if [the victim] had made one,” stated the report.

On July 2, the day after news broke of Robinson’s death, someone reported this sexual harassment to Fort Hood criminal investigators. Because of redactions, it is not clear if the person reporting was the victim.

But Murray wrote in his findings that this lack of accountability expanded beyond just these two incidents and encompassed the entire regiment.

“Overall, [3rd Cavalry Regiment’s] command climate did not sufficiently emphasize the response and prevention of sexual assault or sexual harassment. Recovering from long-standing deficiencies, the ineffectiveness of Fort Hood's SHARP program compounded [the regiment’s] problem,” stated the report. Leaders, supervisors, and chains of command “lacked understanding of their responsibilities.”

Murray summarized nine key findings and 10 recommendations. Six of those recommendations pertained to disciplinary action against five unnamed officers and noncommissioned officers at the battalion level and below, and Maj. Gen. Scott Efflandt, who was acting base commander during Guillen’s disappearance and discovery of her remains.

In December, he was fired as deputy commander at Fort Hood and now serves as a special assistance to the commander of U.S. Army North.

The other recommendations call for improvement to the Army’s SHARP program, the Army’s regulations on missing soldiers, Army Criminal Investigation Command, and the public affairs capabilities of Army commands and garrisons.

Murray also found the day that Guillen went missing, the unit began an immediate and well-coordinated search. She had been working in a headquarters arms room with another soldier.

At about 10:15 a.m., Guillen entered the A Troop arms room, where Robinson worked. At 10:23 a.m., Guillen’s supervisor received a text from Guillen’s phone with the serial number to a machine gun that she had gone to collect from Robinson’s arms room. That was the last known contact anyone had with Guillen, according to the report.

At 10 p.m., the unit’s staff duty officer was notified of the loss of accountability of Guillen and a six-soldier search party worked until 2:25 a.m. The search resumed at 6:30 a.m. An hour later, senior leadership was directly involved.

In the year since Guillen’s death, the Army directed an outside investigation that had similar findings to Murray’s report, which has already led to new policies and procedures for missing soldiers. The service is also working to completely overhaul and restructure its Criminal Investigation Command and the SHARP program. A new “people first” approach to training at Fort Hood aims to rebuild trust between soldiers and leaders.

“You're witnessing action for culture change to inspire our truest values, our Army values,” LeBoeuf said. “We are committed to rebuild our bond among our soldiers, with the American people and more specifically the mothers, fathers, sisters, brothers, family and friends who trust us to support and defend our nation with their sons and daughters. We owe it to them. And that is our promise.”

Corey Dickstein contributed to this report.