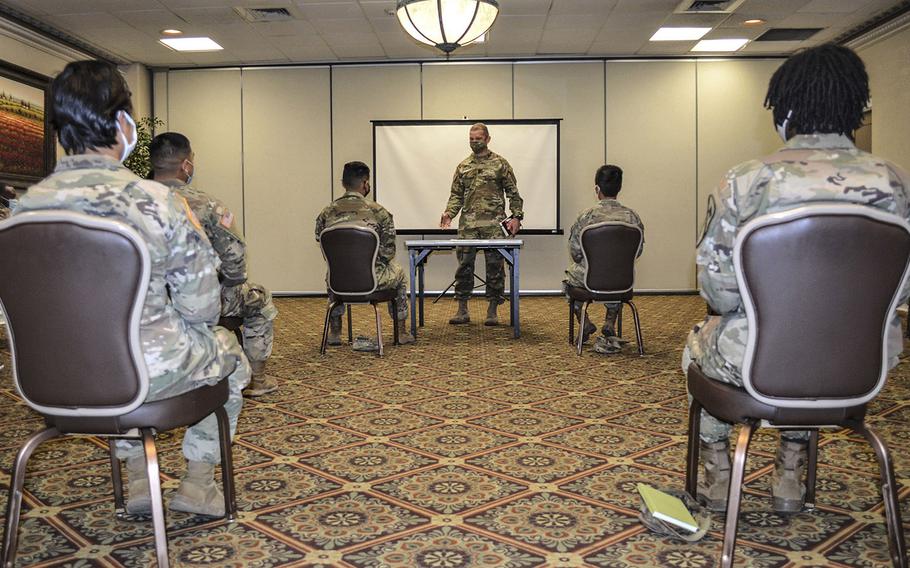 Officials for the Army’s Criminal Investigation Command offered few examples to Congress on Tuesday about improvements to their operations more than three months after a report focused on Fort Hood, Texas, found the agency to be understaffed, under-resourced and unable to pursue some cases properly.

Maj. Gen. Donna Martin, the Army’s provost marshal general and commander of CID, described an ongoing “bottom up review” of the agency following the December release of the Fort Hood Independent Review Committee’s report. The civilian committee, many of whom had investigative or military experience, provided 70 recommendations to improve conditions at the base, with about a dozen of those related specifically to CID. Proposals included improving staffing and resources at the base, leveling the ratio of new and experienced agents, and building better relationships with the surrounding civilian communities.

The report was conducted following the death of Spc. Vanessa Guillen, who was killed by another soldier in an arms room at Fort Hood. Following her disappearance and death in April, the Army announced the review to dive into concerns raised about CID’s handling of the case and the base’s ability to investigate sexual assault and harassment allegations.

The House Armed Services Committee’s subpanel on military personnel on Tuesday held its second hearing on the report, though it was the first time that Army leaders answered questions directly from lawmakers about action on the recommendations.

“I'm truly disappointed that that is the extent of what you have gleaned from the report,” Chairwoman Jackie Speier, D-Calif., said after hearing Martin use her opening comments to describe two programs that Fort Hood has implemented since the report instead of offering examples of her own agency’s initiatives.

Rep. Jim Banks of Indiana, the ranking Republican on the committee, also expressed concern after Martin provided vague details on how she has improved relationships with law enforcement agencies in the community surrounding Fort Hood.

“I'm not hearing a specific answer about a specific effort at Fort Hood to repair damaged relationships. There should be an extra effort or strategy. I hope that you'll come back and give us more of a specific answer to that question,” he said.

Martin did provide at least one concrete example of a staffing change inspired by the report. During the Guillen investigation, CID moved its lead investigator of the case to a new duty station as part of a routine reassignment that all soldiers face. Martin pledged to stop that from happening in future complex cases and she said she’s already changed policy so investigators can stay up to five or six years at a base.

That case also exposed the base lacked the ability to conduct forensic cellphone analysis, according to the report. That has been remedied, Martin said.

She testified alongside Brig. Gen. Terry Bullard, commander of the Air Force Office of Special Investigations, and Omar Lopez, director of the Naval Criminal Investigative Service, known as NCIS. Both have a different operational make up than the Army.

The Army’s agency is composed almost entirely of military personnel, while the Air Force is a mix of about 1,300 military personnel and 475 civilians. The Navy, which has 753 investigators, has been civilian run since 1991 when it was redesigned to an FBI-type organizational structure. Bullard and Lopez said their agencies are reviewing the findings of the Fort Hood report for insights to better their organizations.

Some news reports have circulated that CID is contemplating a switch to a civilian-led agency similar to NCIS. However, Martin said the proposal must still be presented to senior Army leaders and is too premature to discuss.

“Ultimately, any decision made by Army senior leadership will lead to an organization with enhanced capabilities organized and led by law enforcement professionals,” Martin said. “The findings of the Fort Hood Independent Review Committee were eye opening to our Army, but particularly to the law enforcement enterprise. I do not take this report lightly and reforming CID is my top priority. I acknowledge the necessity of the task ahead.”

She said she also plans to propose to senior leaders that 300 civilian agents be added across the agency. Some of those agents will go to Fort Hood, where the office needed three times as many sexual-assault investigators than what it was allocated to manage its case load, according to the report.

All agency leaders in the hearing said they’ve seen an uptick in sexual assault cases. For the Navy, cases have doubled in eight years, Lopez said. Even with additional constraints from staffing cuts, he said NCIS has surged resources from other programs “to ensure that all allegations of sexual assault are fully investigated in a timely and thorough manner.”

“In maintaining the surge, NCIS has focused heavily on two key issues, improving the quality of investigations and reducing investigative timelines. This has resulted in a very robust case oversight system and significant reductions in timelines over the same period,” he said.

Before hearing from the military services, lawmakers heard testimony from members of the Fort Hood review committee and consultants who supported the committee.

Chris Swecker, who led the committee, said there were times while reviewing case files at Fort Hood that he found actions of Army CID agents as “puzzling.” Because the review focused on Fort Hood, he said he couldn’t say whether these problems were systemic throughout the Army.

Getting this process right, Swecker said, is important because a wrongdoing must be taken seriously.

“For many victims of crime at Fort Hood, justice delayed felt like justice denied,” he said.

Mary Counts, a former FBI supervisory special agent and consultant to the committee, said she was able to identify serial offenders at the base within days just by speaking with victims and witnesses.

“I think whatever model CID goes to, there needs to be an emphasis on focus and they need to prioritize their investigations. It can’t be one size fits all,” Counts said. “You have to be able to go after those people who are not only victimizing soldiers, but could possibly victimize others in the future.”