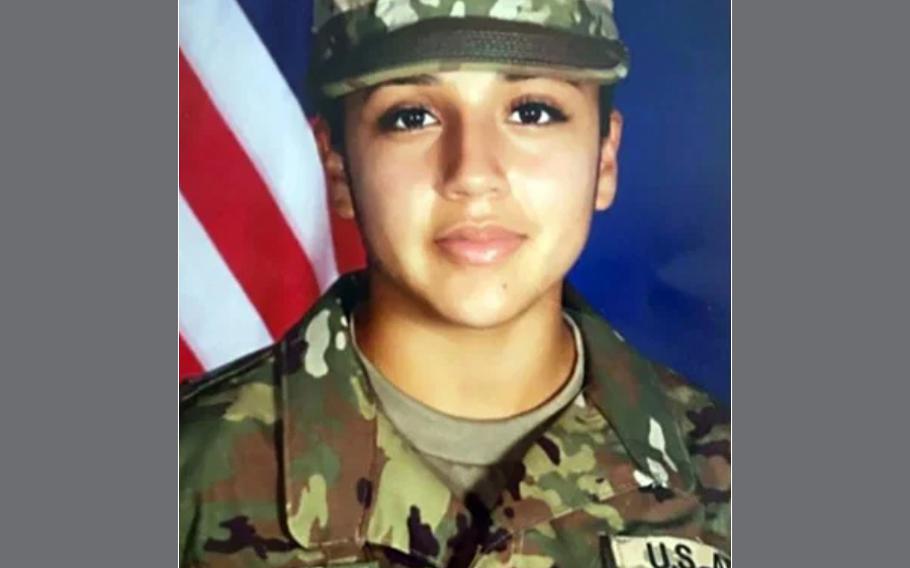 AUSTIN, Texas — The remains of missing Fort Hood soldier Spc. Vanessa Guillen have likely been located, and another soldier suspected of being involved in her disappearance killed himself Wednesday morning as police approached him, Army Criminal Investigation Command announced.

On Tuesday, Army investigators said they believed the human remains found near the Leon River in Bell County were likely related to the search for Guillen, who has been missing for two months. However, a positive identification is still pending.

“We believe that her remains were found. We believe that the suspect killed himself in the morning. And that, unfortunately doesn’t provide us any information about how this happened [or] why a beautiful young soldier is not with us today,” Natalie Khawam, attorney for the Guillen family, said Wednesday during a news conference in Washington, D.C.

Guillen, a 20-year-old small arms repairer with the 3rd Cavalry Regiment, has been missing since April 22. She was last seen at work in the armory room of the regiment’s engineer squadron. On that day, Guillen was not scheduled to work, but she was called in by someone, Khawam said.

“We have made significant progress in this tragic situation and are doing everything possible to get to the truth and bring answers to the family of Pfc. Vanessa Guillen,” said Chris Grey, the spokesman for Army CID.

The suspect shot himself at about 1:17 a.m. Wednesday as officers of the U.S. Marshals Service, Killeen Police Department and the Lone Star Fugitive Task Force attempted to make contact with him in the 4700 block of East Rancier Avenue in Killeen, the central Texas city just outside the gates of Fort Hood.

Identified as a “junior soldier,” the man had fled the Army base late Tuesday and Army investigators had issued an alert to locate him. When officers approached him, the soldier revealed the weapon and shot himself dead, according to a CID news release.

Another suspect, a civilian, was arrested by the Texas Rangers. The civilian suspect, who was not identified, is the estranged wife of a former Fort Hood soldier and was in custody in the Bell County Jail awaiting charges by civilian authorities, according to CID.

While CID declined to release the name of the dead suspect, Khawam identified the man as Aaron David Robinson.

Robinson was the soldier Guillen told her family was sexually harassing her, Khawam said. It is the name that they gave to authorities when they visited the base last week for a meeting with Fort Hood commanders.

Mayra Guillen, Vanessa’s sister, said Wednesday that when she first went to Fort Hood in April to look for her sister, she met Robinson.

“I met him, not knowing that he had something to do with it,” she said. “I felt something was telling me that he did something and I wasn’t wrong apparently. He still had the nerve that same day to laugh in my face. Apparently now he kills himself. Why? I don’t know. But whoever is responsible has to pay.”

Mayra Guillen spoke alongside Khawam and Rep. Tulsi Gabbard, D-Hawaii, during the news conference in Washington. The Guillen family, who are from Houston, traveled to the capital this week to ask Congress for an inquiry into the handling of Vanessa’s case and Fort Hood.

“We demand a congressional investigation,” she said. “I need everyone’s help to keep the story alive because they claim sexual harassment, apparently to them, is not important. What about now? Because it led up to this.”

Khawam said she believes its necessary for Congress to intervene because when the Army investigates its own actions, it’s not as reliable.

“I want to know who lied and why,” she said. “We pay these people with our own money to have these jobs and do the right thing. I love our soldiers. I represent them on a daily basis. This should never happen again.”

The attorney called for legislation in Guillen’s name to create a third-party agency for soldiers to go to in order to report sexual harassment and assault. While Guillen had reported the instances of sexual harassment to her family, she did not go to her unit, because the perpetrator was her superior and she feared reprisal, Khawam said.

At one point, Robinson entered a locker room while Guillen showered, and he sat and watched, she said.

“She just wanted to have a career in the military. She didn’t want that to ruin her career,” Khawam said. “This has to be fixed. The system is broken. It’s not working.”

Gabbard, a major in the Army National Guard, said service members need a system they can trust and that will bring justice.

“This is what Vanessa and her family deserve. This is what all our service members deserve. So I stand with the Guillen family in calling for congressional oversight,” Gabbard said. “We need to know why she did not get the help she needed when she needed it.”

The investigation remains open and ongoing, Grey said. ADD/Guillen was promoted Wednesday to specialist "due to time in service,” according to Fort Hood officials.

Coordination has been made with Armed Forces Medical Examiner Services, who will assist with dental X-rays and DNA for identification of the remains by the Southwest Institute of Forensic Science in Dallas, according to CID.

“There is still a lot of investigative work to be done and we ask for the public and media’s patience,” Grey said.