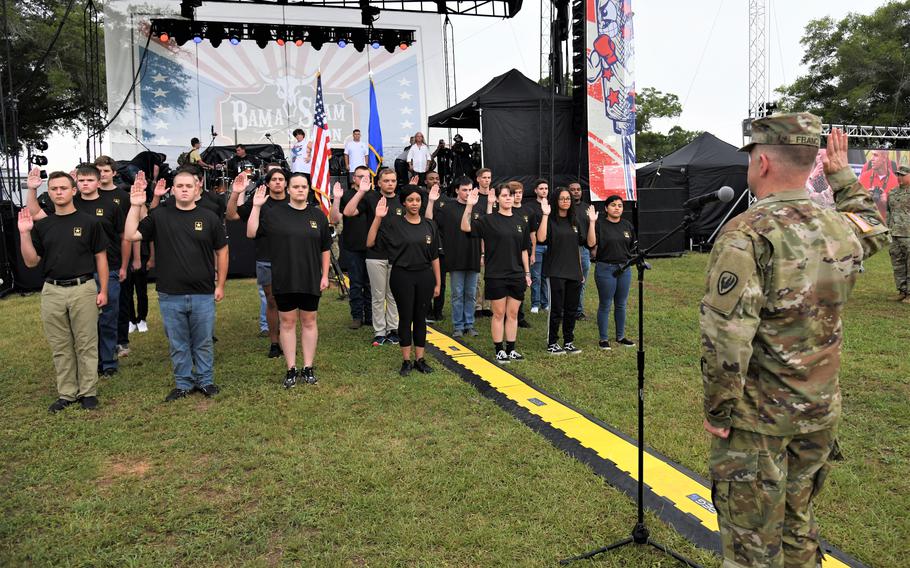 Maj. Gen. David Francis, commander of the Army Aviation Center of Excellence and Fort Rucker, Ala., leads future soldiers as they recite the oath of enlistment June 30, 2022, at the opening of the annual Freedom Fest “Rumble Over Rucker” event to kick off the Independence Day weekend. (Kelly Morris/U.S. Army)

A pilot program called the Future Soldier Preparatory Course is set to start in early August at Fort Jackson, S.C. The program will offer two three-month courses — one to help potential recruits raise their Armed Forces Qualification Test score to the desired 31 or higher and another to help recruits slim down to the service’s body fat requirement, according to the Army.

“The course is in response to the precipitous drop in the number of young Americans meeting Army enlistment standards,” according to an Army statement. “Only 23% fully meet the Army’s eligibility requirements, down from 29% in recent years.”

Those who do not meet the standards in that time will exit the program and not move forward with basic training, according to the service.

Each course is separate, but potential recruits who need to participate in both programs might be allowed to do so on a case-by-case basis, “the fitness portion prior to basic combat training and the academic portion following basic training,” the Army said.

Potential recruits must be able to meet all other eligibility requirements, such as “moral and medical accessions standards,” and be willing to work toward their goals to participate in the program.

“The young men and women who will participate in this pilot must have the desire to improve themselves and want to honorably serve their country,” said Gen. Paul E. Funk II, leader of the Army’s Training and Doctrine Command. “This [program] is a great way to increase opportunities for them to serve without sacrificing the quality needed across our force.”

The program is part of a series of steps that the Army is taking to expand its pool of eligible recruits as the service remains behind in recruiting goals, service officials told reporters on Tuesday.

“Over the past few years, student test scores have dropped and childhood obesity has increased [and] the Army is making every effort to overcome these challenges,” said Lt. Gen. Maria Gervais, the Training and Doctrine Command’s deputy commanding general. “These conditions have negatively affected the Army's ability to meet its recruiting targets.”

“Though it will take time, our objective is to regrow our end strength to 460,000 or more as quickly as possible, and we will pursue this objective aggressively,” the Army said.

Last month, the Army announced another measure to attract more candidates — a $35,000 bonus offer to new recruits willing to sign a four-year contract and ship out to boot camp within 45 days.

“Recruiting in the current environment is a challenge, and we have positions we need to fill right now,” Maj. Gen. Kevin Vereen, who leads the Recruiting Command, said at the time. “Our Army is counting on us to fill these training vacancies quickly, so we are able to offer incentives to gain interest in critical career fields.”