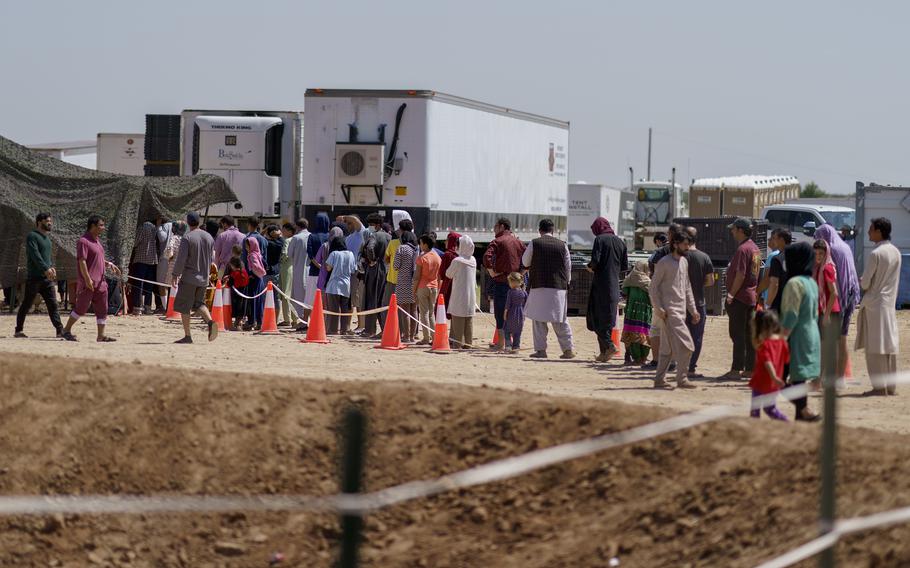 Afghan refugees line up for food outside a dining hall at Fort Bliss’ Doña Ana Village where they are being housed in Chaparral, N.M., Friday, Sept. 10, 2021. (David Goldman/AP)

The woman, whose name and age were not released, was assaulted Sept. 19 by a “small group of male evacuees” at the complex in New Mexico, Fort Bliss officials said.

The incident is being investigated by the FBI.

“We take the allegation seriously and appropriately referred the matter to the Federal Bureau of Investigation,” Fort Bliss officials said in an emailed statement. “The safety and well-being of our service members, as well as all of those on our installations, is paramount.”

No details on the assault or the suspects have been released.

The victim is among 1,000 service members who are part of Operation Allies Welcome. The U.S. operation is to “support vulnerable Afghans, including those who worked alongside us in Afghanistan for the past two decades, as they safely resettle in the United States,” according to the U.S. Department of Homeland Security.

The number of refugees at the Doña Ana County Range Complex was not immediately available. Thousands of refugees have come to the U.S. after fleeing Afghanistan as the U.S. ended its 20-year presence there in late August.

Officials said additional security and safety measures are being put into place at the complex.

“Task Force-Bliss is also implementing additional security measures to include increased health and safety patrols, additional lighting, and enforcement of the buddy system at the Doña Ana Complex,” officials said. “We will cooperate fully with the FBI and will continue to ensure the service member reporting this assault is fully supported.”