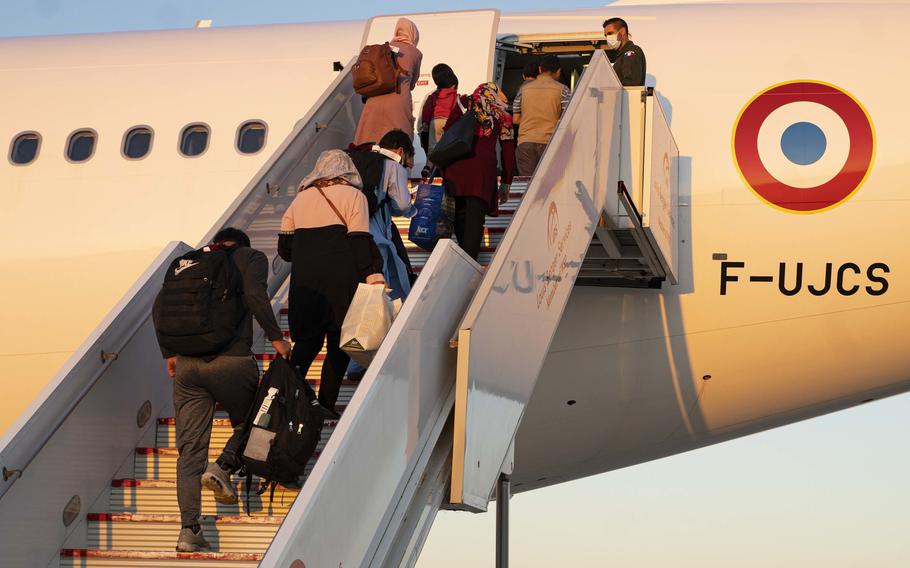 Evacuees from Afghanistan board a flight on Sept. 2, 2021, to the United States at Naval Station Rota in Spain. The Rota base is supporting the Department of State mission to facilitate the safe relocation of U.S. citizens, Afghans seeking special immigration visas, and other vulnerable Afghans. (Sgt. Claudia Nix/U.S. Marine Corps)

WASHINGTON — There will be no flights to the U.S. for Afghan evacuees for at least another week after several cases of measles were detected among recent arrivals, chief Pentagon spokesman John Kirby said Monday.

The White House halted the operation on Friday after the first cases were discovered. The decision to stop flights for seven more days was based on the recommendation of the national Centers for Disease Control and Prevention after five evacuees were diagnosed with measles when they arrived in the United States, Kirby told reporters at the Pentagon.

About 25,600 of the more than 124,000 people who U.S. and coalition forces evacuated from Afghanistan before the final flights took off from Kabul’s airport Aug. 30 are living on military bases in the U.S. as they await approval to stay in the country, according to the most recent data released Sept. 3. Tens of thousands more remain at staging sites in Europe and the Middle East before they can travel to the United States.

One of the measles cases was confirmed last week at Fort McCoy in Wisconsin, another at Fort Pickett in Virginia and three were detected upon arrival at Dulles International Airport near Washington, D.C., from overseas staging bases.

Fort McCoy and Fort Pickett are among the eight military installations in the U.S. accepting evacuees, along with Fort Bliss in Texas, Joint Base McGuire-Dix-Lakehurst in New Jersey, Camp Atterbury in Indiana, Holloman Air Force Base in New Mexico, and Fort Lee and Marine Corps Base Quantico in Virginia.

“They have been housed separately and are receiving medical care, and the CDC is doing contact tracing and allows people to self-isolate as needed,” Kirby said. “We want the people who work on these bases and the families who live there to know how seriously we're taking it and that we are separating these individuals from the rest of the cohort there.”

Measles is a highly contagious viral infection that can be fatal, especially in children. The vaccine for measles has mostly eliminated the illness in the United States, but there have been small outbreaks in communities with low vaccination rates.

In 2019, the U.S. suffered the largest outbreak in nearly 20 years with 1,282 cases reported, according to the CDC, but that number dropped to eight last year.

The Defense Department will also “be working very quickly on the appropriate immunizations” for the evacuees, Kirby said. The military is now giving the measles, mumps and rubella — or MMR — vaccine to Afghan evacuees already at U.S. bases and will soon begin giving the shot to the evacuees while they are still overseas.

“All arriving Afghans are currently required to be vaccinated for measles as a condition of their humanitarian parole,” Kirby said.

The evacuees are also offered coronavirus vaccinations at Dulles and the military installations, but they are not mandatory, Air Force Gen. Glen VanHerck, commander of U.S. Northern Command, told reporters at the Pentagon on Aug. 27.