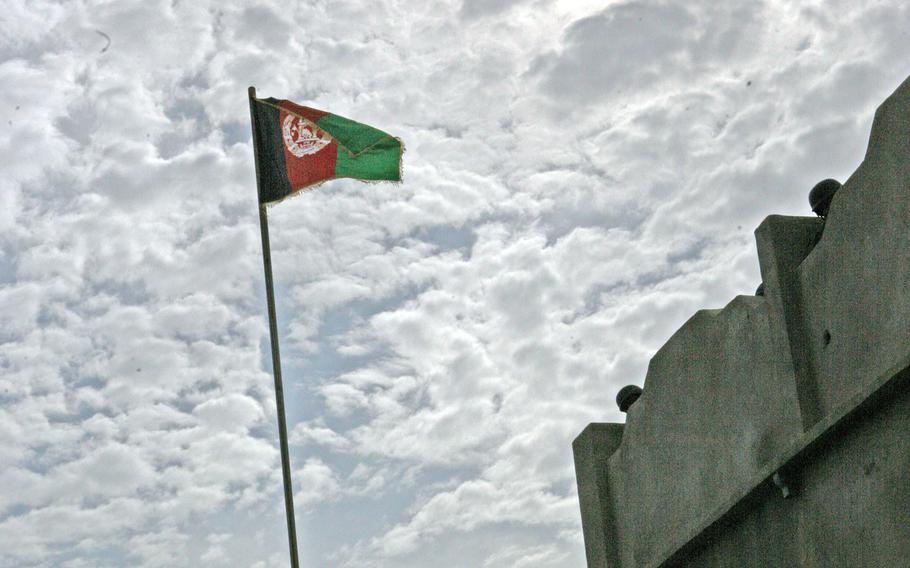 An Afghanistan flag is raised over Helmand province in 2010. (U.S. Marine Corps)

TOKYO — Ten Afghans who left their country after the Taliban took control in August arrived in Japan this week, according to the Japan Ministry of Foreign Affairs.

Four arrived on Sunday night and another six on Monday via commercial flights to Narita International Airport outside Tokyo, according to Ministry of Foreign Affairs news releases on Monday and Tuesday. They are the first Afghans to arrive in Japan after the Taliban took over Afghanistan, according to Kyodo News.

The group was composed of Afghan employees of the Japan International Cooperation Agency, and their family members, who traveled overland from Afghanistan to a neighboring country on their own, Chief Cabinet Secretary Katsunobu Kato said during a news conference Monday. He did not identify the neighboring country citing security concerns.

JICA is a governmental agency that provides aid to promote economic and social development in developing countries.

The Japanese government issued the Afghans short-term visas and bought them airplane tickets after they expressed their wish to evacuate to Japan, Kato said.

He said they received health checkups at Narita and will be quarantined as part of Japan’s requirements for international arrivals to curb the coronavirus’ spread.

Kato said Japan will support the evacuees whether they wish to travel to a third country or stay in Japan. He said the government would consider asylum applications from any of the Afghans in a routine fashion.

“Although they have not applied for refugee status, if they wish to apply, the Japanese government will examine each case based on the latest situation in Afghanistan and will give appropriate authorization to those who qualify,” Kato said.

Late last month, Japan sent Self-Defense Force aircraft to Afghanistan to evacuate Japanese and Afghans who worked at the Japanese Embassy and for JICA, the Mainichi newspaper reported on Monday.

However, the aircraft were able to evacuate only one Japanese and 14 Afghans to Pakistan on behalf of the United States, Kyodo News reported. The Japanese and Afghans the Self-Defense Force expected to fly out were delayed by the Aug. 26 terrorist bombing that killed 13 U.S. service members, according to Japanese media reports at the time.

Kato said Japan will continue to secure the safety of those Japanese and local workers remaining in Afghanistan and assist any wishing to evacuate through diplomatic efforts, including negotiations with the Taliban, and by cooperating with related countries such as the United States and Qatar.

About 500 Japanese and Afghans who worked for the Japanese government remain in Afghanistan, with their families, according to the Mainichi report.