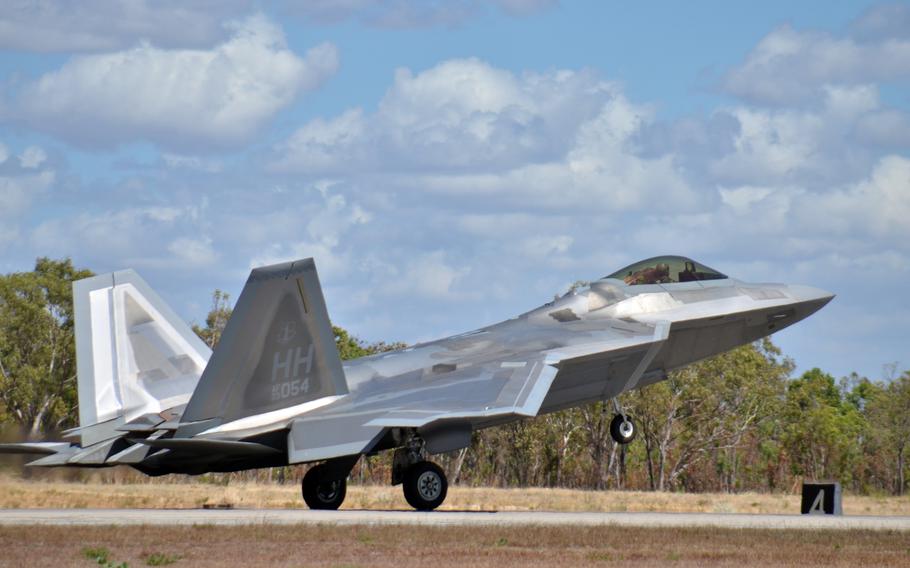 Marine and Air Force aviators flying from the same runway at Royal Australian Air Force Base Tindal have also joined up with their Australian counterparts to fuse their respective methods of aerial combat.

Dynamic force employment, a concept laid out in the 2018 National Defense Strategy, means putting a major combat force into a fight while keeping options available to counter emerging threats. It also means being strategically predictable but operationally unpredictable.

“We look for every opportunity to train alongside our allies and partners,” Wilkinson said.

The Marine Corps deployed 300 troops and a dozen F-35Bs from Marine Fighter Attack Squadrons 121 and 242, both based at Marine Corps Air Station Iwakuni, Japan, for the biennial Pitch Black exercise. The drills involving 17 nations began Aug. 19 and conclude Thursday.

The presence of advanced aircraft in the region demonstrates their potentially wider role, and the possibility of a permanent presence expressed in June by the head of the U.S. Indo-Pacific Command, Adm. John Aquilino.

“I would envision that that capability is certainly — well, it’s certainly desirable, but we would like to get to that,” he told the Foundation for Defense of Democracies, a think tank in Washington, D.C. “That ability to, like I said, operate in contested space, fifth-generation capabilities, whether they be F-22, F-35, are critically important to the ability to deliver deterrence.”

A permanent contingent of Air Force fifth-generation fighters west of the International Date Line is a “desirable” option as the U.S. seeks to deter an increasingly assertive China, Aquilino said.

The Raptors, the older of the two aircraft and worth $143 million each, can fly more than twice the speed of sound with a range of more than 1,850 miles, according to the Air Force. Its inventory includes 183 of the air superiority fighters.

The F-35, which comes in a short-takeoff, vertical-landing version flown by the Marines, is the “backbone” of allied air power, according to its maker, Lockheed Martin. In addition to its stealth characteristics, the fighter carries advanced avionics for sensing and connectivity that permit it to communicate with other aircraft, and track and target multiple adversaries, according to Lockheed.

The Raptor, also manufactured by Lockheed, has similar capabilities.

The F-35 is the Department of Defense’s most expensive weapon program, estimated to cost over $1.7 trillion to buy, operate, and sustain, according to an April report by the Government Accountability Office.

The department has bought over 700 out of 2,470 F-35s it plans to acquire. Recent contracts for jets delivered through 2023 put the cost of an F-35 at under $80 million, according to the office.

Australia is one of more than a dozen air forces allied with the U.S. to fly the F-35A, which operates from conventional runways. Australia has, so far, accepted 50 of 72 F-35As from Lockheed Martin, according to the RAAF.