US, Australian F-35 stealth fighters fly stunts over tourist beach Down Under DARWIN, Australia — A fleet of warbirds, including U.S. Marine Corps and Air Force fighters in Australia for a three-week airpower exercise, wowed locals and vacationers during a beach flyover Thursday afternoon in Australia’s Northern Territory.

The planes swooped over Mindil Beach, a popular tourist spot in Darwin, which hosts a rotational force of 2,200 U.S. Marines between April and September each year.

Thousands showed up for the event in a city that’s full of visitors lured by the Northern Territory’s warm weather during the southern hemisphere’s winter months. It was a sunny 91 degrees Fahrenheit during the flyover.

This month and next, Darwin is also hosting U.S. airmen and Marines participating in Pitch Black, a biennial exercise that includes 2,500 service members and more than 100 aircraft from 17 nations flying day and night missions between Aug. 19 and Sept. 8. Airmen from many of the nations involved in the drills joined the crowd watching the airshow from the beach.

The stars of the flyover included a Royal Australian Air Force F-35A Lighting II conventional stealth fighter and a pair of Marine Corps F-35Bs, which are capable of short takeoffs and vertical landings.

The Marine Corps stealth fighters performed a semi-hover with their landing gear extended as they flew low in front of the crowd before zooming out of sight.

F-35Bs and aviators from the Iwakuni, Japan-based Marine Fighter Attack Squadron 121 are flying out of RAAF Tindall, just south of Darwin during Pitch Black.

The Marines also showed beachgoers an MV-22 Osprey, the helicopter-plane hybrid that can hover and then tilt its rotors and fly on fixed wings farther and faster than helicopters. 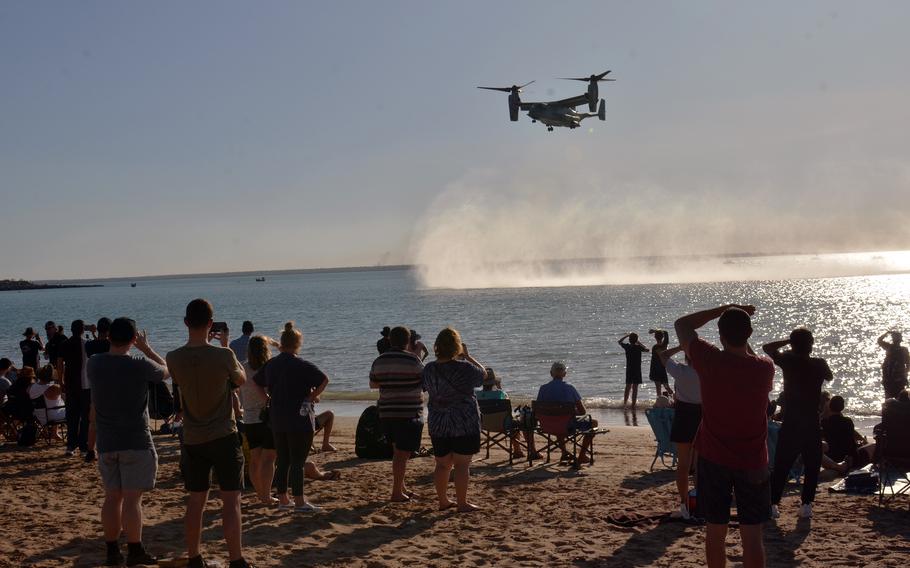 The Osprey hovered close to shore while spectators on the beach snapped photographs of the aircraft and posed for selfies with it in the background.

Marine Medium Tiltrotor Squadron 268 out of Kaneohe, Hawaii, is part of this year’s Marine rotation.

Marine Capt. Trent Laboda, 28, an Osprey pilot in Darwin with the rotational force, was watching the show.

“I don’t know that I’ve ever been to an airshow that an Osprey has been at,” he said.

The Air Force brought two F-15C Eagle fighters to the beach party. The planes zoomed around in circles offshore bathed in the light of a brilliant sunset.

F-15Cs and airmen from the Okinawa-based the 67th Fighter Squadron have been flying out of RAAF Darwin this month.

One of the locals taking in the action was Drew Daniell, 49, a flying boat pilot whose job involves taking workers and gear to pearl farms in the Northern Territory.

Daniell brought his daughter, Madison, 14, along to check out the aircraft.

“Where else can you stand on the beach and have an F-35 come down and you can almost touch it?” he asked.

The grand finale involved an Australian F-35A, which screamed over the crowd with afterburner glowing and performed a 10-minute aerobatic display before it zoomed over the horizon.