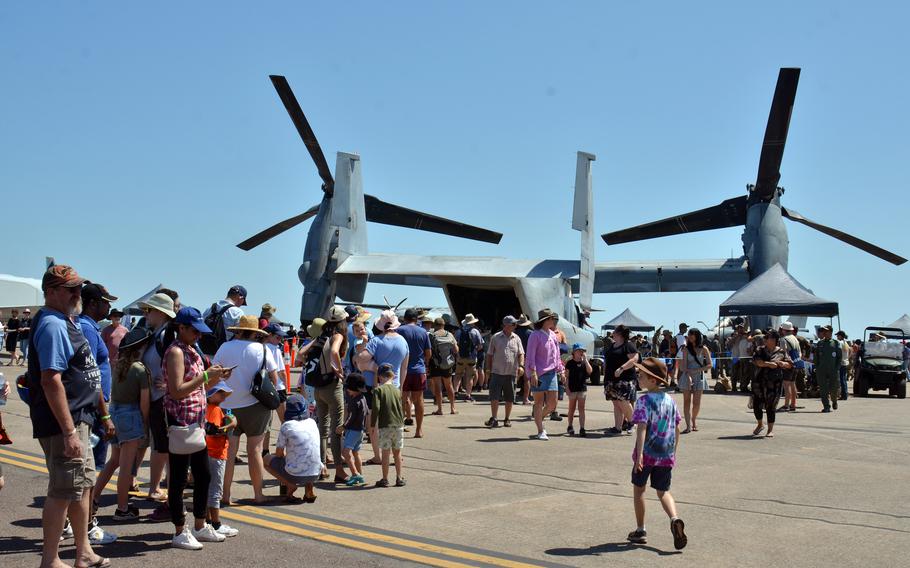 People line up to see inside a Marine Corps MV-22 Osprey during an open house at Royal Australian Air Force Base Darwin in Australia, Saturday, Aug. 27, 2022. (Seth Robson/Stars and Stripes)

DARWIN, Australia — A display of military hardware from the multinational force taking part in the biennial Pitch Black exercise in northern Australia drew scores of locals and troops for a closer look.

Thousands packed Royal Australian Air Force Base Darwin over the weekend to inspect an inventory of military equipment a small nation would envy. Aircraft like an MV-22B Osprey tiltrotor and an Indian air force Sukoi SU-30MKI Flanker fighter jet shared the stage with mundane equipment like armored vehicles and cargo trucks.

Marine 1st Lt. Kevin Nguyen, 24, of Ashburn, Va., said he thought the Marines’ own Osprey was the coolest aircraft on the ramp, although he found the Australian version of the F/A-18 Super Hornet fighter equally impressive.

“I think they are taking a little bit of the focus away from the trucks,” said Nguyen, commander of the Marine Rotational Force – Darwin motor transport platoon.

The event was organized as part of the biennial Pitch Black drills involving 2,500 airmen, over 100 aircraft and 17 nations underway in Australia’s Northern Territory until Sept. 8.

The open house at RAAF Darwin put on display much of the equipment at work for the six-month rotational force and the participants of Pitch Black.

Cattle grazier David Pattemore, 63, queued up on Saturday to peer inside the Osprey, said the Air Force and Marine presence is welcome in the Northern Territory. “Unfortunately, the world’s not a beautiful place all over,” he said before bringing up China’s rapid military buildup and “aggressive” efforts to gain influence in the region.

Vintage planes such as a World War II-era P-51 Mustang fighter stood nearby.

In addition to the Falcon and the Osprey, the U.S. brought an Air Force F-15 Eagle and a Marine KC-130J aerial refueler. The Marines brought along some tactical vehicles, too.

People were eager for selfies in the big green truck, said Hernandez, who has been in Australia with the rotational force for six months.

The worst part of the deployment has been the heat, he said; the best part is the “beer and parties.”

The Marines have been impressed by Australian army trucks during their time Down Under, Valtierra said.

“We like to look at their trucks and they look at ours,” he said. “I like the ‘G Wagon,’ which is a kind of dune buggy they use for off road.”