(Tribune News Service) — Stephanie Gattas enlisted in the Navy at 18, excited to serve her country.

The perpetrators were her fellow sailors — some of whom held leadership roles.

Driven by her personal experience, Gattas in 2015 founded The Pink Berets, a nonprofit that helps women service members and veterans suffering from post-traumatic stress disorder, as well as mental and emotional trauma.

Sexual assault and harassment in the military is a chronic problem that often leads to lasting mental and physical issues for survivors. While the Department of Defense is taking steps to address the issue, support programs like The Pink Berets fill a crucial gap in serving service members and veterans searching for ways to heal.

Most of the women who have sought help from The Pink Berets are survivors of military sexual trauma, which involves any experience of sexual assault or harassment by a service member during their time of military service, according to the Department of Veterans Affairs. Medical data from the VA indicates the trauma can lead to PTSD, depression and other mood and substance use disorders.

Over 1 million outpatient visits took place at the VA for military sexual trauma related care in 2017, according to data compiled by Protect Our Defenders, a national nonprofit dedicated to reducing rape and sexual assault in the military.

In 2005, the Defense Department established the Sexual Assault Prevention and Response program to promote prevention, encourage increased reporting of sexual assaults and improve response capabilities for victims. Since then, the agency has released an annual report on sexual assault in the Armed Forces.

The latest report described sexual assault and harassment as “persistent and corrosive problems” across the military, with 8.4% of active duty women and 1.5% of active duty men experiencing an incident of unwanted sexual contact in the year prior to being surveyed. While the department says it has changed the metric used to measure sexual assault, the 2018 rates were 6.2% for women and 0.7% for men.

Rates of sexual harassment, gender discrimination and workplace hostility — behaviors linked to risk of sexual assault — increased for women throughout the active force compared to the 2018 findings.

And while LGBTQ service members represented only 12% of active duty members in 2018, they accounted for 43% of all sexually assaulted service members that year, according to data analyzed by the Rand Corp.

The problem is pervasive in Texas. A 2021 report from the Rand Corp found female soldiers at Army bases in the state face the highest risk of sexual assault and harassment compared to other posts.

The death of Army specialist Vanessa Guillen in 2020 sparked national outrage and increased awareness of the epidemic of sexual assault in the military. Guillen’s remains were found about 20 miles east of Fort Hood in Texas. Investigators believe she was bludgeoned to death by a fellow soldier.

While the Army initially said there was no evidence Guillen was sexually harassed, a U.S. Army investigation released a year after her death found Guillen did report being sexually harassed twice by a fellow soldier at Fort Hood. Officials failed to report the harassment up the chain of command, according to the report.

Findings in the Defense Department’s latest report suggest an overall growth in an “unhealthy military climate” since fiscal year 2018. But while the government has resources in place for survivors, help remains scarce, Gattas said. 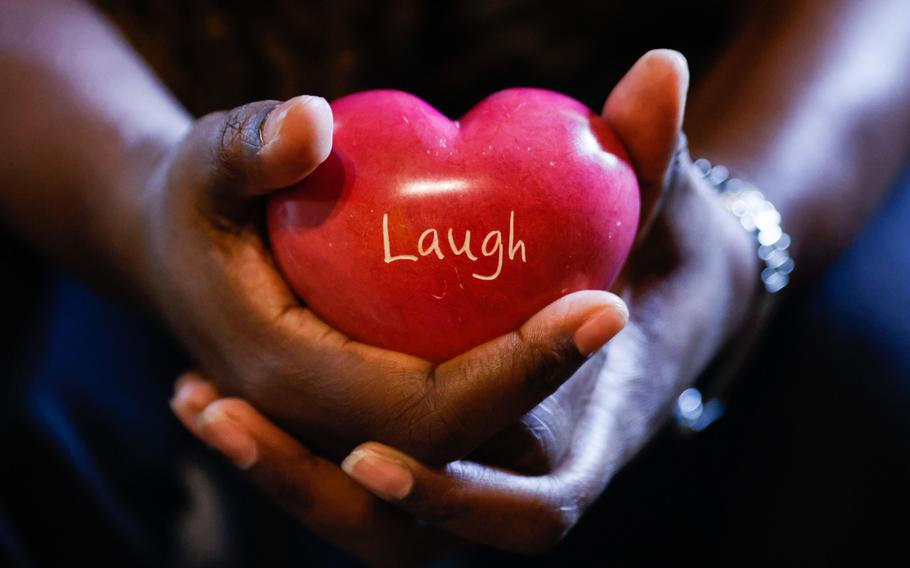 Ayana Brown, a Navy veteran, holds a a heart-shaped stone with the word “laugh” engraved in her meditation room at her home in San Antonio on Jan. 2, 2023. Brown is a participant of the culinary therapy program by The Pink Berets, a nonprofit that helps women service members and veterans suffering from post-traumatic stress disorder (PTSD), as well as mental and emotional trauma. (Lola Gomez, The Dallas Morning News/TNS)

Gattas entered the Navy in 1994, with the intention of serving her country for life. Her first assignment was on the USS Simon Lake, a submarine tender traveling to aid combat ships. Sometimes, the crew would be on the water for more than 90 days.

Sexual harassment on the ship was rampant, Gattas said.

“It was often this thing where it was kind of like the rite of passage, and I guess the norm,” she said. She asked herself: “Am I supposed to adapt and overcome this? Am I supposed to just allow them to speak to me a certain way? To make advances? To follow me? To stalk me?”

Gattas said she was constantly in “fight mode.” She said she reported the harassment to leaders who said they would take care of it, but the environment only became more permissive. It was common for those in leadership to make advances, she said.

She and the other women would have to pass their tormentors in the long hallways connected by vestibule doors. Share meals in the galley. And work beside them.

When the ship docked, Gattas would go out with her friends. One night, after going out to drink, she was assaulted. She said she blamed herself: “I should have never drank. I should have never allowed myself to let my guard down.”

Instead of planning her career, she couldn’t wait for her time in the military to be over. Challenging the “status quo” wasn’t an option, she said.

Many active duty women face pressure not to report incidents of sexual harassment or assault because of retaliation and ostracism. An estimated 66% of service members who reported retaliation after filing a sexual assault complaint were women, according to data compiled by Protect Our Defenders.

Less than half of women perceived their leaders as acting in a fully supportive manner after they reported sexual harassment, according to the latest Defense Department report. About 7% of men and 21% of women said filing a sexual harassment complaint would be “too risky.”

“You’re never the same when you leave” the military, said Gattas, who is now 47. “You have a traumatic experience and then you just don’t feel whole again.”

Military sexual trauma is compounded by the fact that the targets and the aggressors are supposed to protect one another and they are working toward a common goal.

“The military is a culture — it has ideals, it has a history behind it,” said Dr. Lewis Jeffery Lee, a retired Navy SEAL, licensed therapist and mental health chaplain based in San Diego, Calif. “So when folks come into the military, generally they are trusting because of the high standards of discipline and ethical behaviors expected.”

Soldiers and sailors are taught to rely on one another, to work as a team, to foster an environment of protection and respect. These fundamental principles define military life.

Survivors are at a higher risk of dying by suicide. Many survivors may also experience receptive moral injury, which occurs when one’s morals or values are violated by the actions of someone they trust or look up to.

Military sexual trauma is more likely to result in PTSD than going into combat, according to the Office of the Inspector General. Ayana Brown, a Navy veteran, hangs a “Meditating” notice on the door nob of her meditation room at her home in San Antonio on Jan. 2, 2023. Brown is a participant of the culinary therapy program by The Pink Berets, a nonprofit that helps women service members and veterans suffering from post-traumatic stress disorder (PTSD), as well as mental and emotional trauma. (Lola Gomez, The Dallas Morning News/TNS)

The Pink Berets program helps women identify what triggered their PTSD, anxiety, depression or other mental health issues, whether it be related to combat or surviving a sexual assault.

The organization uses holistic approaches to help women find a path to heal. Equine, culinary and art therapies allow women to explore new skills and build confidence. Through offering a range of activities, the women are able to choose what tools help them heal best.

“If you build an infrastructure that allows them to define what those building blocks look like, then you can help somebody with a fractured psyche become normal again,” Gattas said.

Women can participate in the therapies for as long as they need. Veterans and volunteers oversee most of these activities, which are funded through private donors and sponsors. Some therapies take place with a private clinician, while culinary and art therapy take place at the Endeavors Veteran Wellness Center in San Antonio.

Clients can be referred from the VA, private therapists, social media and word of mouth. The Pink Berets group has ambassadors across the nation who spread awareness about the organization, which has served over 3,600 women through online and in-person programs.

The organization’s programs are not “one-size-fits-all,” Gattas said. Some women evaluate the goals and actions of the organization for months before signing up.

When your moral code is violated, it can be hard to seek help from trusted family members, friends or colleagues, Lee said.

Ayana Brown, a Navy veteran in San Antonio, said The Pink Berets program was “very unique” because of its emphasis on women with military sexual trauma symptoms.

“Before, I had never heard of such a thing, I was just doing everything on my own, trying to figure it out,” said Brown, who found The Pink Berets in 2017 after 12 years of coping with paranoia, hypervigilance, anxiety, depression and anger.

Brown said she was sexually assaulted twice while serving in the Navy. The first time, the assault was by her recruiter, before she got to boot camp. Ayana Brown, a Navy veteran, poses for a portrait in her meditation room at her home in San Antonio on Monday, Jan. 2, 2023. Brown is a participant of the culinary therapy program by The Pink Berets, a nonprofit that helps women service members and veterans suffering from post-traumatic stress disorder (PTSD), as well as mental and emotional trauma. (Lola Gomez, The Dallas Morning News/TNS)

Brown is a foodie, and the culinary classes are her favorite therapy. In her kitchen, you can find recipe cards for dishes like pear and goat cheese crostini, honey tamarind glazed baby-back ribs and boursin mashed potatoes.

“It was amazing to be in the room with that, to learn from that, to just be exposed to different things that I can do for myself to make me feel good,” Brown said.

A few times, Brown’s husband joined her for the class. Gattas is intentional about hosting activities that include the womens’ families, because the issues that are affecting the women often impact the entire family. 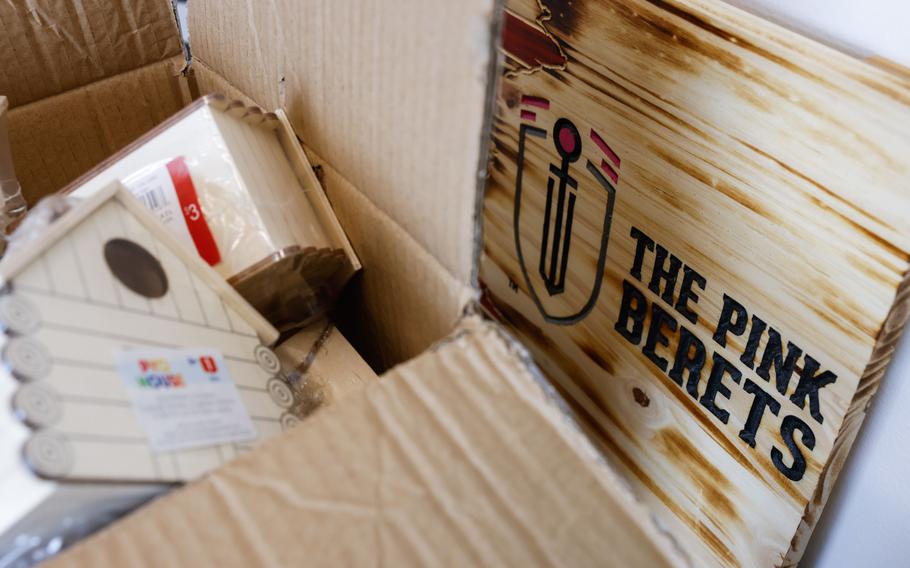 The Endeavors Veteran Wellness Center in San Antonio on Jan. 2, 2023. The Pink Berets, a nonprofit that helps women service members and veterans suffering from post-traumatic stress disorder (PTSD), as well as mental and emotional trauma, operates at this center. (Lola Gomez, The Dallas Morning News/TNS)

Brown still has physical pains that stem from the sexual assaults. She can’t be in a room with the door closed with a male colleague — it’s one of her triggers. She’s still mending relationships that became collateral damage over years of living without support. But she no longer feels alone in her journey to heal, and she’s rebuilding trust.

Gaining people’s trust is “vital” for healing, but it’s one of the biggest challenges the organization faces, Gattas said.

The Pink Berets program, she said, helps “them understand that they’re not in this fight alone, but they have sisters that want to come alongside them and fight with them.” 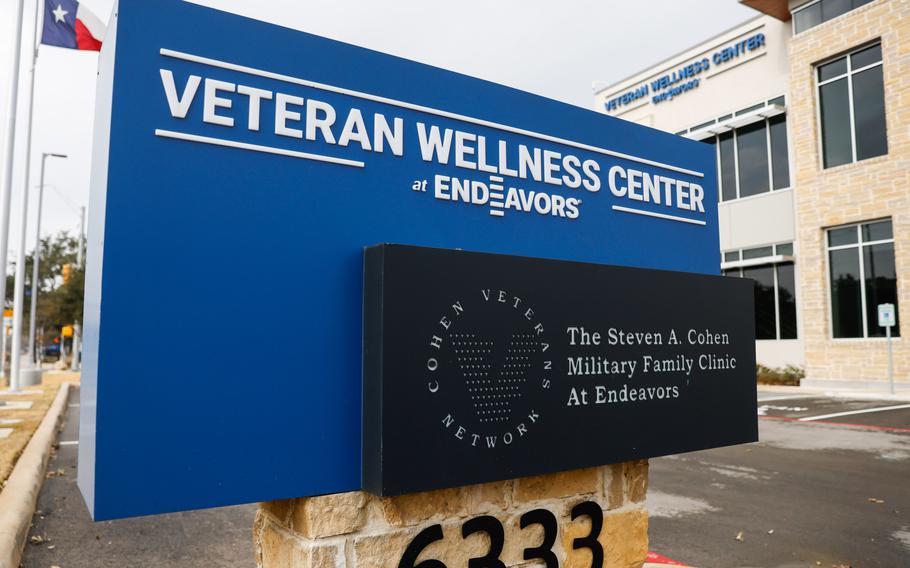 The Endeavors Veteran Wellness Center in San Antonio on Jan. 2, 2023. The Pink Berets, a nonprofit that helps women service members and veterans suffering from post-traumatic stress disorder (PTSD), as well as mental and emotional trauma, operates at this center. (Lola Gomez, The Dallas Morning News/TNS)