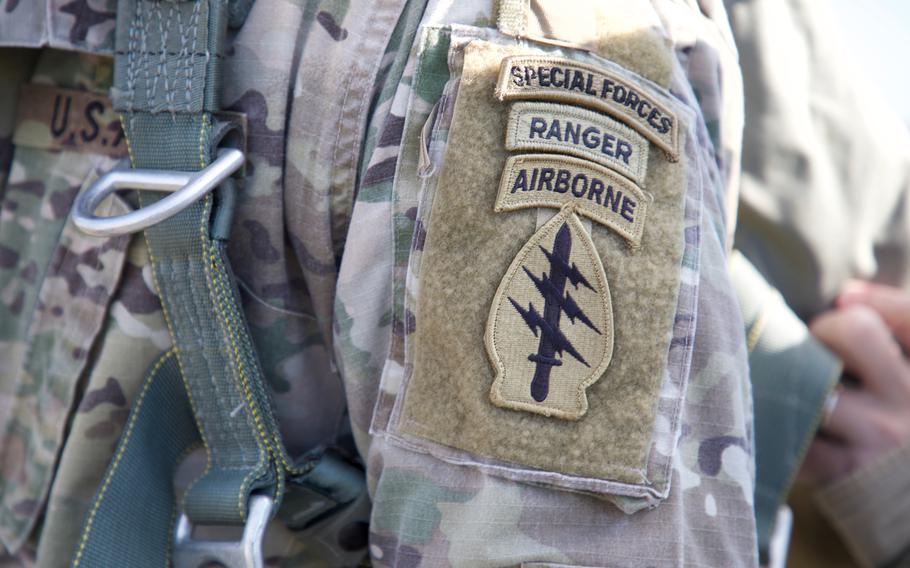 An Army Green Beret, assigned to 20th Special Forces Group, Alabama National Guard, displays a unit patch and tabs while being rigged up into a MC-6 parachute at Northeast Alabama Regional Airport in 2019. (Ausitn Berner/Army)

WASHINGTON — There are several possible reasons why less than 10% of the military’s special operations forces are women — including discrimination, sexual assault and conflicting military policies, a government watchdog concluded in a study released this week.

In 2021, fewer than one in 10 special operations forces troops were women, according to Special Operations Command, or SOCOM, the military’s unified command that oversees the special operations components of the Army, Air Force, Navy and Marine Corps.

“Women make up less than 10% of SOCOM service members, compared with about 19% DOD-wide,” according to the report. “SOCOM leaders have acknowledged existing issues of gender discrimination, sexual harassment and assault, and career impediments, and the need to do more.”

Another possible reason for fewer women serving in special operations roles is SOCOM is not getting important data that could help prevent and respond to the barriers faced by women, according to the study.

“SOCOM has limited access to timely, accurate, and complete data on its personnel, including incidents of gender discrimination, sexual harassment, and sexual assault,” the 169-page GAO study states. “While SOCOM has taken some steps to address its data access limitations, the [Pentagon] has not established a collaborative process to ensure SOCOM has access. Without such a process to facilitate SOCOM’s access to needed data, SOCOM leadership will not be positioned to identify trends or address urgent concerns.”

The report identified several other likely barriers to women serving in the special forces. They include demanding physical standards, pregnancy and child care issues, social support and isolation and reduced access to women’s health care.

Further, the GAO found conflicting policies across the military. It said some of the branches have policies within special operations environments that do not align with the Pentagon policies.

“Without the military services revising their policies … to help ensure alignment with DOD policies, such cases could be processed inconsistently across [the department],” the study states.

• Army, Marine Corps and Air Force policies for discrimination and harassment in joint environments should be revised to align with the Pentagon’s policy.

• The Pentagon should create a collaborative process to share data that could help SOCOM prevent and respond to barriers for women in special operations.

• The Pentagon should clarify which office will create required annual assessments on the integration of women into previously closed positions, such as special operations forces.

• The Pentagon should create a consistent process for use of those annual assessments – including a plan of action to address barriers to women in special operations forces.

• The Pentagon should do a comprehensive analysis about barriers for women serving in special operations forces.

• After the comprehensive analysis, the Pentagon should develop a plan to address barriers or career impediments for women in special operations forces – and it should include clear goals, objectives, metrics and milestones.

The Pentagon responded by agreeing with all eight of the GAO’s recommendations – but said it thought the study was too limited in its scope because it focused only on women who experienced discrimination or harassment or assault in the special operations forces and interviewed only women.

“Reducing risk factors for gender-based discrimination and violence cannot be achieved without fostering protective factors in the organization,” Erin Logan, the Pentagon’s deputy assistant secretary of defense for special operations policy and programs, wrote in a letter to the GAO.