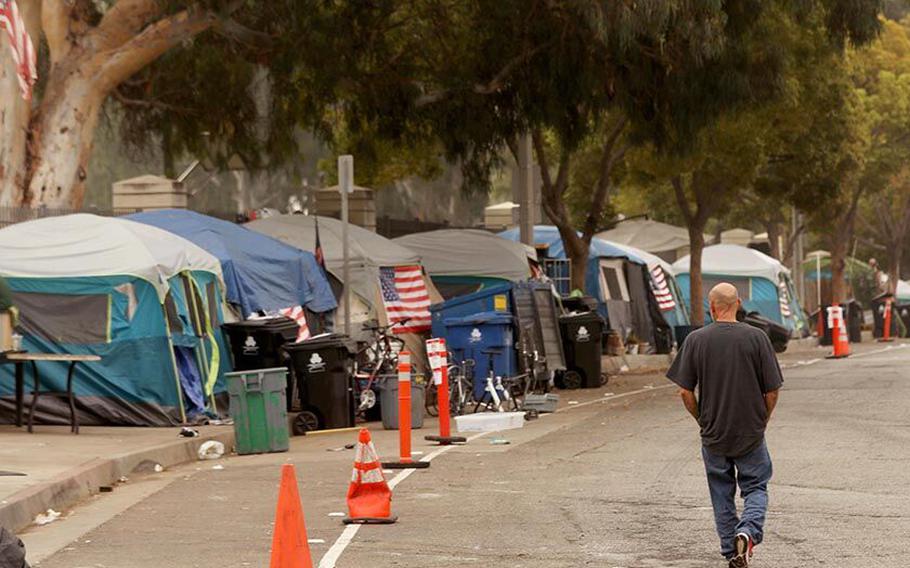 LOS ANGELES (Tribune News Service) — Fourteen veterans filed a lawsuit in federal court Tuesday demanding that the U.S. Department of Veterans Affairs provide permanent housing for thousands of homeless veterans on and around its West Los Angeles campus and take steps to ensure that portions of property leased to outside organizations are used primarily for veterans.

Attorneys for the veterans are seeking an order giving the agency six months to create 1,200 new homes on the 388-acre West Los Angeles campus, lease an additional 2,500 units in existing apartments within a five-mile radius and provide supportive services.

The VA could do that by speeding up the renovation of dozens of abandoned buildings on the property in accordance with a 2015 master plan or by rapidly constructing new housing as the military does in combat zones, said one of the plaintiff’s attorneys, Eve Hill, of the Baltimore and D.C. law firm Brown, Goldstein & Levy.

The VA’s failure to provide supportive housing forces those veterans to “accept institutionalization or go without services,” it said.

“Whether you put a big part of those on the campus, how you divide them up, where you put people, that’s all flexible,” Hill said. “It’s the outcome that is the important part.”

Informed of the coming lawsuit, Christy Hagen, deputy director in the agency’s Los Angeles regional public affairs office, said the VA had not received the complaint and did not generally comment on litigation. “There wouldn’t be anything the VA would have to say on anything we haven’t seen,” she said.

Much of the 106-page complaint, filed electronically Tuesday night in the U.S. District Court in Los Angeles, tells the stories of the 14 individual plaintiffs such as Lavon Johnson, the son of two military service members. Johnson enlisted in the Army as a teenager and served nearly five years, including in Iraq, but has been homeless for the 10 years since his honorable discharge.

He has been treated at the VA for mental illness and anger issues while living in the former homeless encampment just outside the VA grounds on San Vicente Boulevard, the lawsuit said.

He was known for playing classical music on a piano he rescued from the trash. Johnson moved into an 8-foot-by-8-foot structure in the tiny home interim village the VA set up when the encampment was cleared last November. The piano was put in a storeroom that has been locked when he has tried to use it.

The lawsuit contends that those tiny homes are “so institutional as to be carceral. Residents are forced to undergo searches, are denied visitors, and are surrounded by fencing and security.”

The lawsuit alleges that the VA has for decades neglected the mental health of thousands of veterans by maintaining a service system that they cannot access because they do not have housing.

“The phrase ‘homeless veteran’ should be an American oxymoron,” it said. “But this is the cruel truth — the federal government consistently refuses to keep its word and take meaningful actions to bring the abomination of veteran homelessness to an end.”

Instead, it added, “the VA provides institutional services and temporary housing, leaving veterans with Serious Mental Illness and TBI [traumatic brain injury] who could live in community-based Permanent Supportive Housing with no options but to accept institutionalization or go without services. As a result, the VA remains a principal cause of continuing homelessness among veterans.”

The lawsuit also seeks to require the VA to ensure that portions of the campus currently leased to UCLA, nearby Brentwood School, a parking lot company and an oil-drilling company are used primarily for veterans.

“The VA has failed even to consult veterans about plans to construct, and recently expand, UCLA’s state-of-the-art baseball facilities on land where the VA is required to build Permanent Supportive Housing,” the lawsuit said. As a sop to veterans, it said, the facility offers them free parking.

“Veterans must console themselves with the fact that they can park for free where they should have homes.”

A 2021 VA Office of Inspector General report found that several of those leases were out of compliance with the VA’s legal obligation to use the land to “principally benefit veterans and their families.”

“As a result of these land use deals, veterans have limited access to, or are restricted altogether from much of the WLA Campus and that land is consequently unavailable to provide housing to veterans or otherwise expand the services offered to veterans on the WLA Campus,” the lawsuit said.

The lawsuit builds on promises the VA made in settling a 2011 case brought by 10 veterans with severe disabilities. The VA agreed to draft and implement a master plan to provide housing and supportive services for veterans, setting a goal of 480 units in four years.

Last November, the VA inspector general took the agency to task for completing only one building, with 55 housing units, out of the 480.

Attorneys handling the lawsuit say those are not valid excuses.

“If you can build housing for veterans in Afghanistan and Baghdad, you can also do it in Los Angeles,” said Mark Rosenbaum, attorney for Public Counsel.

“Every president, regardless of party, has committed to ending veteran homelessness,” Rosenbaum said. “What we’re saying to the president of the United States is follow through on what you said.”