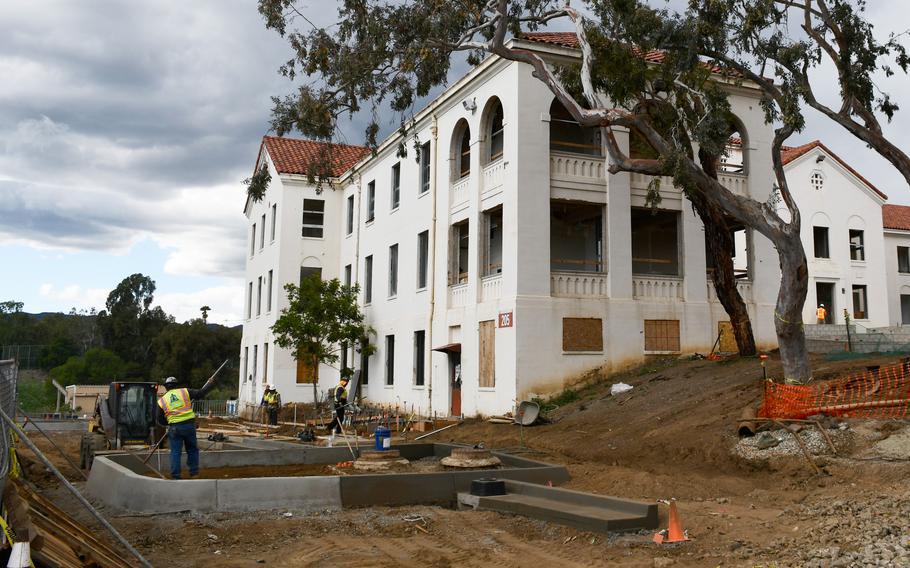 Construction workers restore a 1920s-era building on the Department of Veterans Affairs campus in West Los Angeles on Feb. 23, 2022. Two buildings on VA grounds were being made into housing units for homeless veterans, with each set to contain 50 apartments. The work is part of a larger master plan that assists the VA in determining the most effective use for the 388-acre campus. (Nikki Wentling/Stars and Stripes)

The 656-page plan, titled Master Plan 2022, contains details for a major construction project on the VA campus in West Los Angeles, where acres owned by the department are going unused. At last count in 2020, about 10% of all homeless veterans lived in Los Angeles.

The updated plan calls for more than 1,000 housing units for homeless veterans to be under construction within the next one to five years. The plan states 220 additional units will be built within six to 10 years, and the VA will add 350 more units sometime after that.

VA officials promised Friday that there would be more action on the plan following years of delays.

The project was first established in 2016, and only 55 units have been finished in the past six years – about 8% of what was expected to be completed by this point. Harris said work on the development was “stymied by a variety of obstacles.”

After an investigation last year, the VA’s Office of Inspector General blamed the delays on land-use issues, environmental impact studies, the need for infrastructure upgrades and challenges with fundraising, among other issues.

When the plan was first created, the agency assumed the existing infrastructure on the VA campus could handle the utility requirements for the development, said Steve Braverman, director of the Greater Los Angeles Health Care System. It was later discovered that wasn’t the case. To prepare for the development, the agency secured $75.5 million for utility and infrastructure improvements from 2020 to 2022, and another $34.6 million is allocated for 2023.

Shortly after taking office last year, McDonough said he would give his approval on a revised master plan for the project, promising action and transparency.

“The original draft master plan laid out a plan for development that the VA has not met,” Harris said. “In fact, we’re well behind. It called for 700 units to be built by now. We know this deeply frustrates veterans and advocates. It frustrates us, too.”

The VA campus in West Los Angeles is 388 acres in total. The land was donated to the government in 1888 by a wealthy California landowner who wanted the area to be used to provide health care and homes for disabled veterans. There are several historic structures on the campus, and most of the buildings were built in the Spanish Colonial Revival style, with their characteristic red-tile roofs and stucco walls.

The campus contains a nine-hole golf course, a Japanese garden and plenty of open space. Many of the buildings now sit vacant, some because of their states of disrepair and others because the coronavirus pandemic pushed employees out of their offices.

In one part of the campus, construction workers are restoring two large buildings into permanent housing units. By the end of the year, the VA expects to have 186 apartments ready for use.

While it’s much fewer than the 700 originally planned for 2022, Harris is hoping that finishing some units this year will help the VA regain credibility that it lost among veterans.

“I want to note, talk is cheap. Watch our actions,” he said. “We have upwards of 180 new units schedule to come online this year. If we can bring those about this year on time, I think that’ll be an important step in rebuilding credibility.”