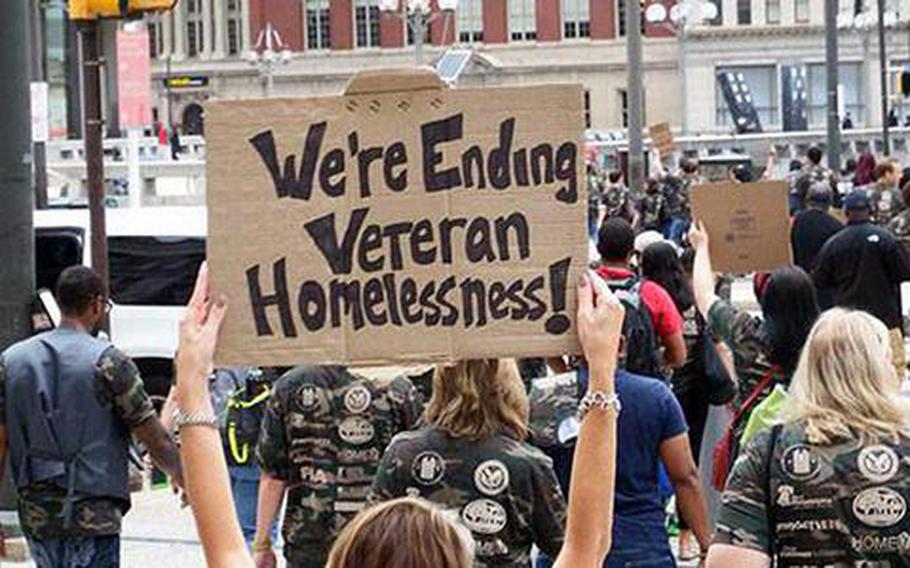 Three grant opportunities offered by the Department of Veterans Affairs will expand services and incentives already provided by the agency including one that encourages landlords to rent residences to veterans, the VA announced Thursday, Oct. 27, 2022. (VA.gov)

WASHINGTON – Three grant opportunities offered by the Department of Veterans Affairs will expand services and incentives already provided by the agency including one that encourages landlords to rent residences to veterans, the VA announced Thursday.

In September, the VA awarded $137 million in grants to 150 nonprofits through its Supportive Services for Veteran Families program, which provides supportive and prevention services and rapid housing to veterans who are homeless or at risk of becoming homeless. The grants will allow nonprofits to expand their services for veterans and their families.

On Thursday, the VA announced it had three new funding opportunities for organizations to combat veteran homelessness, one is through its Supportive Services for Veteran Families program.

“We're excited about this grant because it actually offers and includes some expanded services that we really think are going to be game-changers for us, and this includes providing more incentives that will encourage landlords to rent to veterans,” said Jill Albanese, director of clinical operations and senior adviser for the Veterans Health Administration’s homeless programs.

The other two grants are through the VA’s Grants and Per Diem program, which provides transitional housing services that supply immediate shelter and case management to help veterans become housing stable. The incentives will become available to organizations that receive the grants nationwide in fiscal 2024.

The Department of Housing and Urban Development estimated in January 2021 that 19,750 veterans in a single night experienced sheltered homelessness – veterans who live in shelters.

John Kuhn, national director of the Veteran Health Administration’s Supportive Services for Veteran Families program, said many of the veterans who the VA serve in the program have poor credit histories or committed crimes. This can lead landlords to reject rental applications and consider these veterans as a risk, according to the American Apartment Owners Association.

“We know in a very tight housing market that we have, we're asking landlords to take chances on our veterans,” Kuhn told reporters Thursday.

The Council on Criminal Justice released a report in August that found one-third of veterans reported having been arrested or booked into a jail at least once in their lives. The report also revealed 181,500 veterans were in prisons or jails in the United States.

“We're asking landlords in an environment where they can rent to anyone to take a chance on our folks, so we have to compensate them for that risk,” Kuhn said.

The VA incentive allows organizations to pay rent up to two months to a landlord, but only if it is necessary to help a veteran remain or obtain permanent housing, and the veteran must be offered at least a one-year lease. The incentive also can be used with the VA’s Supportive Services for Veteran Families program or the U.S. Department of Housing and Urban Development-VA Supportive Housing vouchers, which pairs HUD's Housing Choice Voucher rental assistance with VA case management and supportive services for homeless veterans.

The tenant incentive, dubbed the General Housing Stability Assistance, funds bedding and basic kitchen supplies. However, the assistance leaves needs such as internet access unaddressed, according to the VA’s notice of funding availability on the Federal Register.

Organizations can expand the assistance and provide up to $1,000 to veterans and their families for their miscellaneous move-in expenses. The expenses include food, furniture, household items, or electronics, such as televisions. Additionally, internet or cable bills are now considered utilities.

Access to the internet is an essential component of the modern economy, comparable to utilities, according to the VA’s notice of funding availability.

“Veterans without such access are put at a disadvantage in finding and applying for work opportunities, purchasing needed consumer goods at the lowest possible cost and communicating through email and other forms of social media,” according to the announcement.

VA Secretary Denis McDonough said Tuesday that the VA has housed 30,914 veterans, 81% ahead of the agency’s goal, as of the end of September. In February, the VA announced its goal to place at least 38,000 veterans experiencing homelessness into permanent housing for 2022.

In early October, the VA published a notice of funding opportunity for about $11.3 million in legal services grants for veterans experiencing or at risk of homelessness through the agency’s Legal Services for Veterans grant program.

This new grant will allow the VA to administer legal services to veterans who are homeless or at risk of being homeless and are facing legal issues that make it difficult to maintain housing.

“These grants will provide critical resources to help veterans and their families climb out of homelessness or prevent them from falling into homelessness in the first place,” McDonough said. “Every veteran deserves a good, stable, safe home in this country they fought to defend — and these grants are a key part of making that goal a reality.”