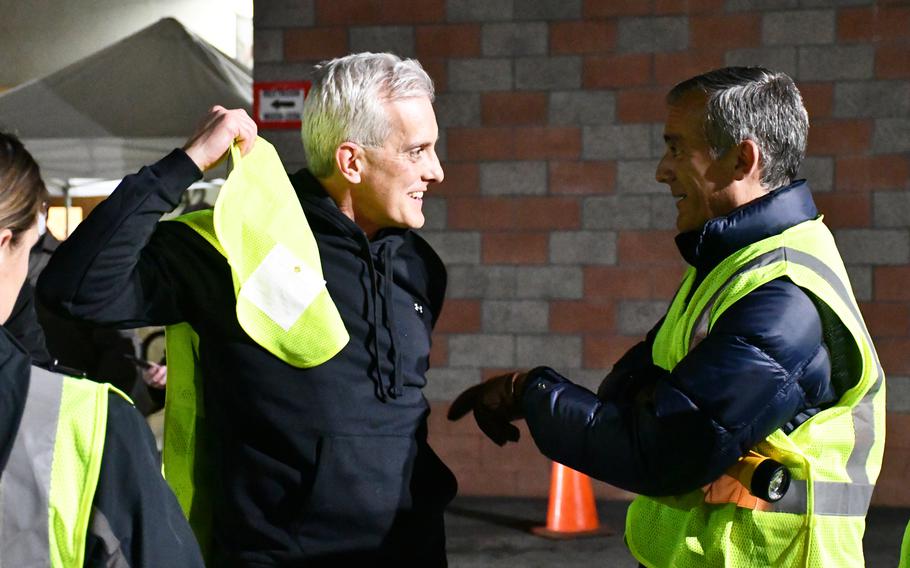 Department of Veterans Affairs Secretary Denis McDonough, left, greets Los Angeles Mayor Eric Garcetti, right, in downtown Los Angeles on Thursday, Feb. 24, 2022. McDonough, Garcetti, and dozens of other volunteers counted the number of homeless individuals living in Skid Row, a neighborhood that contains one of the largest homeless populations in the country.   (Nikki Wentling/Stars and Stripes)

LOS ANGELES – After touring the Department of Veterans Affairs campus in West Los Angeles last October and meeting veterans living in tents right outside its gates, VA Secretary Denis McDonough decided to focus the agency’s resources on tackling veteran homelessness in the greater Los Angeles area, where the issue is at its worst.

According to the most recent data available, about 10% of all homeless veterans in the United States live in Los Angeles County.

McDonough started his efforts in Los Angeles by promising to get all homeless veterans living in the homeless encampment known as Veterans Row into housing by Nov. 1, 2021. The row of tents lined San Vicente Boulevard, along one end of the West Los Angeles VA campus. About 40 veterans were living there when McDonough visited in October.

In addition to eliminating Veterans Row, McDonough urged local VA officials to house another 500 homeless veterans in Los Angeles, either in temporary or permanent housing, in time for the holidays.

The VA surpassed those goals and got more than 700 veterans into temporary or permanent housing by the end of 2021. Some individuals living along Veterans Row moved inside VA grounds, where they now sleep in 8-by-8-foot shelters.

At the end of February, McDonough traveled to the campus again to check on progress since his first visit. He toured the community of tiny shelters that was created to replace Veterans Row, and he established new goals for VA staff. He expects the VA to help place at least 1,500 veterans in Los Angeles into permanent housing in 2022 – a 10% increase over 2021.

While in Los Angeles, McDonough also participated in the federal government’s annual point-in-time count, which is a nationwide effort to count the country’s homeless population.

Stars and Stripes caught up with McDonough during the visit. The interview has been edited for brevity and clarity.

What do you think about the steps that have been taken regarding veteran homelessness in Los Angeles since you last visited in October 2021?

I'm proud. I'm proud of the work that the team is doing. You know, at every turn, people have said, ‘This shouldn't happen,’ and ‘We can’t get the veterans off San Vicente.’ The veterans are in much safer positions now. More importantly, the veterans who were there – along with dozens of other veterans – are on the pathway to permanent housing, which is the goal here. So, I feel like our team is doing very important work. But that doesn't mean there's not work left to be done – there is. Specifically, to your question: How do I feel about the work that's been done since my last visit? I feel like we're moving the dial in important ways, but there's more work to be done.

Why do you think VA staff in Los Angeles were able to complete the goal you set of housing 500 veterans by the end of the year but weren’t able to do so before?

Well, I think they were doing a lot of good work before, one. And two, Congress has been very generous with investments. The Speaker of the House and the president have been very clear to me, personally, that this is a major priority, and that's why they've set aside significant – even historic – levels of funding to help us to ensure that we get it done. So, one, they had been doing good work, and two, Congress has invested heavily in this. And three is that there are really important partnerships here on the ground in Los Angeles, and those partnerships are maturing. Those are partnerships across the federal, state, and local level. They also include, importantly, independent community actors and privately funded actors. That coordination of effort is exceedingly important to having met that initial goal and will be really important to set the next aggressive goal that we lay out.

What do you see as the biggest challenge with housing veterans in Los Angeles?

We have a proven strategy called Housing First that has reduced the number of the homeless veterans in the country by half. We have committed resources from Congress that are at very substantial levels. And we have gotten better at identifying how to break logjams, including for example, logjams with the uptake of [housing] vouchers. What remains is for us to underscore that we will not tolerate the idea that there’s a homeless veteran in this country. When we internalize that and we apply the urgency of our activity to the intensity of that principle, then we have all the other ingredients to get this done.

Why did you want to participate in the point-in-time count here?

I think it's really important to participate in this because it gives us a very close understanding of the challenges that homeless people in the country are facing. And obviously, in many cases, what homeless veterans are facing. That's really vital data for our policymaking. We also want to reassure the American people that we take this very, very seriously. I know that this is a topic of great concern around the country. By being here on the street, carrying out these counts, we want to demonstrate that we're very, very serious about this, and that we take very seriously not only the challenge but the stewardship of resources that the American people have dedicated to this challenge. And the third thing – I wanted to be in LA because there's more homeless veterans here than there are in any other one place in the country. And I want those veterans to know that I care about them, and I'm here to make sure I understand what they're going through.

You’ve said you wanted the work here in Los Angeles to spark momentum across the country on the issue of veteran homelessness. Are you seeing that yet?

We’re seeing really important work being done in other places that, by the way, can also help move the dial here. For example, just east of here in Riverside County, Calif., they've been at “functional zero” for veteran homelessness since 2016. That's because they're doing many of the things that we're doing here, including aggressive casework – getting to know each individual veteran to know that veteran’s story and to make sure that we connect that veteran to the resources available. But we've seen great progress in other places. I was just in Salt Lake City. We've seen progress in Salt Lake City, and we’ve seen important progress in New Orleans. The principle that we are solidifying in Los Angeles is that with a proven strategy, with historic resources, and with identifying proven strategies to break down heretofore difficult issues – to include, for example, the use of [housing] vouchers – we can get this done. And if we can get it done in the tightest housing market in the country, we can get it done anywhere.