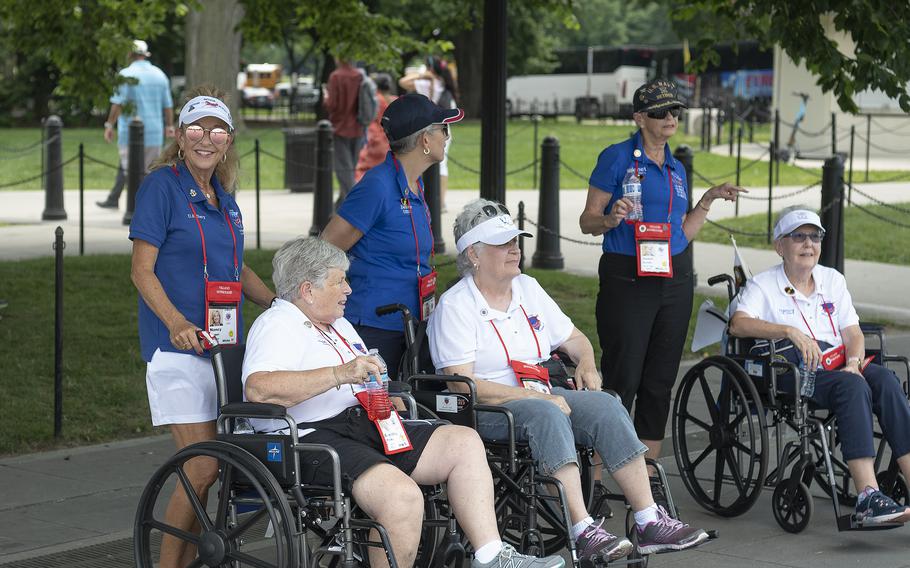 Honor Flight participants wait for the arrival of a Marine Corps drill team near the Lincoln Memorial on the National Mall in Washington, D.C., on Tuesday, May 31, 2022. Guests of honor in wheelchairs are from left, Army veteran Connie Plotkin, Air Force veteran Dixie Thalwitzer and Navy veteran Nancy Atkinson. (Carlos Bongioanni/Stars and Stripes)

The Honor Flight Network will offer its first flight from Honolulu to Washington, D.C., during the week of Veterans Day, Nov. 11, the organization announced in a news release.

The flight will allow Hawaii-based veterans who served in World War II, the Korean War and the Vietnam War, as well as veterans with terminal illnesses or injuries from all eras, to experience the nation’s war memorials and monuments. Several more flights from Honolulu are planned for 2023 and beyond, the release said.

The Honor Flight Network will help transport veterans who do not live on Oahu from their home islands to Honolulu for the flight. The organization will partner with Alaska Airlines for its Hawaii flights.

“The Honor Flight program fosters deep connections among veterans through the shared bond of serving our country and the exhilarating experience of visiting the national memorials,” Honor Flight Network Chief Executive Officer Meredith Rosenbeck said in the release.

Formed in 2005 and initially focused on helping World War II veterans visit the nation’s capital, The Honor Flight Network has flown more than 250,000 veterans from across the country to Washington’s memorials at no cost to them. The nonprofit coordinates flights for approximately 26,000 veterans annually, the release said.

For more information, to apply for a flight or to volunteer, visit www.honorflight.org.