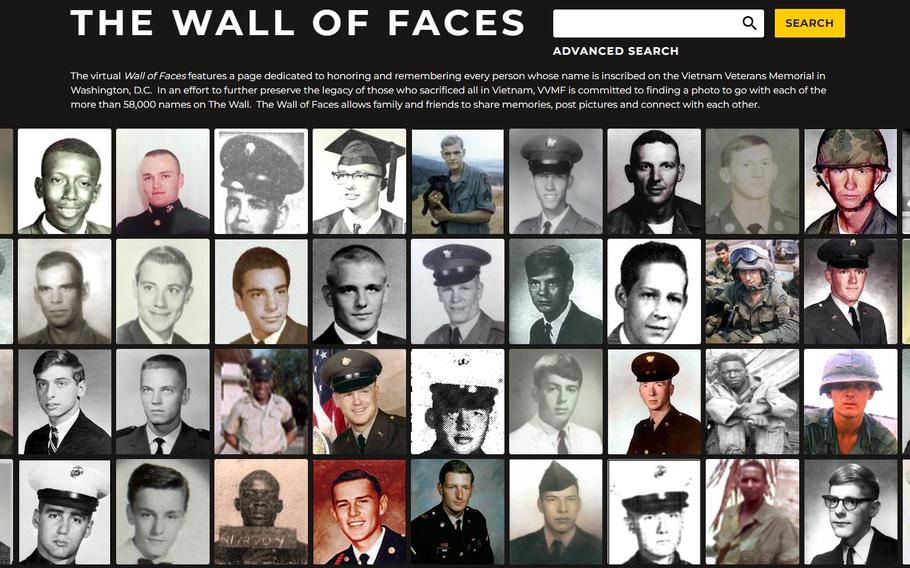 The Wall of Faces website now features at least one photo of each of the more than 58,000 service members listed on the Vietnam Veterans Memorial. (Screenshot from vvmf.org)

WASHINGTON — A photo of every service member whose name is inscribed on the Vietnam Veterans Memorial is now featured on a website dedicated to honoring them.

At least one photo has been found of each of the more than 58,000 service members listed on the memorial, also known as The Wall, The Vietnam Veterans Memorial Fund announced in a news release. The photos can be viewed on the virtual Wall of Faces, which is dedicated to honoring and remembering these service members who died or were missing in action during the Vietnam War.

“When VVMF began this effort, the goal was to put a face with a name for each of the 58,281 service members whose names are inscribed on The Wall. To ensure that visitors to The Wall understand that behind each name is a face — a person with a story of a family and friends who were forever changed by their loss,” VVMF President and CEO Jim Knotts said in the release. “Today, the Wall of Faces tells these stories through photos and remembrances left by both friends and family members.”

The search for the photos began in 2001, with a more concerted effort launched in 2009, the release said. Volunteers and family members of these veterans from across the country contributed to the effort.

VVMF, the nonprofit that founded the Vietnam Veterans Memorial in 1982, is still seeking higher quality photos and remembrances of these Vietnam veterans, Knotts said in the release.

To view and search the Wall of Faces, visit vvmf.org/wall-of-faces. Visit vvmf.org or call 202-393-0090 for more information.