An honor guard marches in at the groundbreaking ceremony for the National Desert Storm Memorial on the National Mall in Washington, D.C., on Thursday, July 14, 2022. (Samuel Weinstein/Stars and Stripes)

WASHINGTON — As retired Gen. Rhonda Cornum stood in the blazing sun Thursday morning, looking out over hundreds of veterans, their family members, international ambassadors and others, she recalled the day her Black Hawk helicopter was shot down in Iraq during Operation Desert Storm.

It’s the day she was captured as a prisoner of war, suffering several broken bones and a gunshot wound.

“We’ve heard a lot of things about Desert Storm, but there’s one thing that really stands out,” Cornum said. “It’s that it was a demonstration of all the good things that can happen when there’s an unambiguous and positive moral mission like liberating Kuwait from a brutal invasion.”

Cornum was one of the 697,000 American troops that served during Desert Storm in 1991. In the 30-plus years since the conflict, those troops have not been recognized among the many other service members memorialized in Washington, D.C. 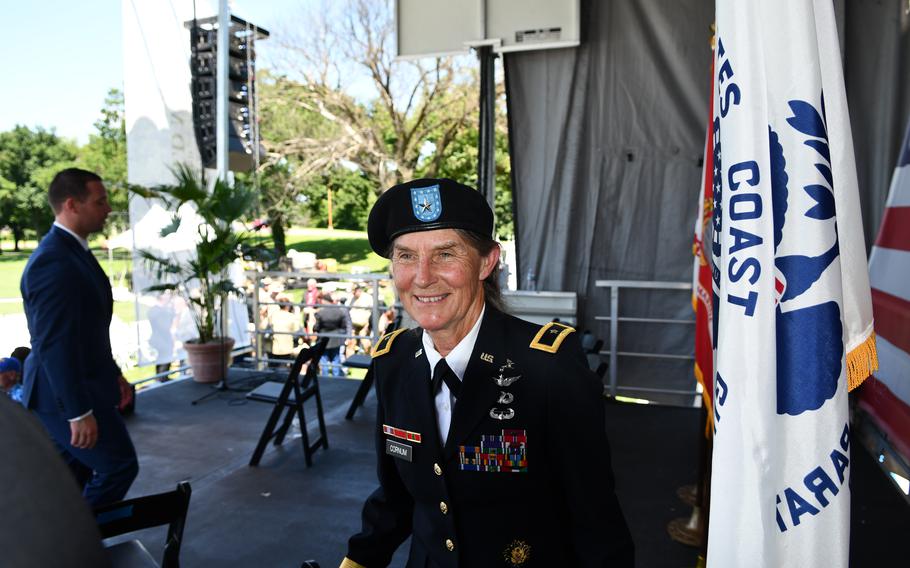 Retired Gen. Rhonda L. Cornum, a veteran of Desert Storm, was among the main speakers at the groundbreaking ceremony for the National Desert Storm Memorial on the National Mall in Washington, D.C., on Thursday, July 14, 2022. (Samuel Weinstein/Stars and Stripes)

The National Desert Storm War Memorial Association (NDSWM) broke ground Thursday on a memorial at the corner of 23rd Street and Constitution Avenue, not far from the Vietnam Veterans Memorial and the Lincoln Memorial.

At the groundbreaking, where over 100 veterans and their family members gathered, Scott C. Stump, NDSWM’s CEO, emphasized the long journey that the group has taken to make the memorial a reality.

“The road getting here has been fraught with obstacles, impediments and the need for our team to constantly improvise, adapt and overcome,” he said. 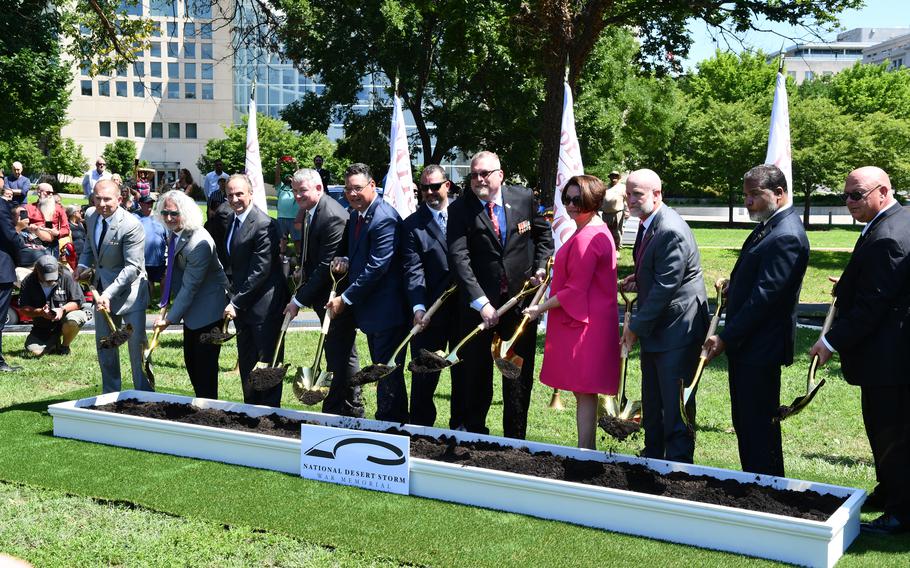 The official groundbreaking for the National Desert Storm Memorial on the National Mall in Washington, D.C., on Thursday, July 14, 2022. (Samuel Weinstein/Stars and Stripes)

The effort to build a memorial in honor of Desert Storm has been ongoing since 2013, when former Rep. Phil Roe, D-Tenn., introduced legislation in Congress to allow construction on federal land in Washington, D.C.

President Barack Obama authorized construction of the memorial in 2014, and President Donald Trump signed legislation in 2017 allowing for the memorial to be built near the National Mall.

Originally, the memorial was slated to be on the Constitution Avenue Belvedere, a strip of land along the Potomac River. Members of the National Desert Storm War Memorial Association opposed the location because they said it would be too hard to access from other memorials.

In 2018, after the National Capital Planning Commission decided on the southwest corner of 23rd Street and Constitution Avenue, the Commission of Fine Arts voted in favor of the new location, marking the end of a multiyear process to select the site. Derek H. Chollet, Counselor of the U.S. Department of State, speaks at the groundbreaking ceremony for the National Desert Storm Memorial on the National Mall in Washington, D.C., on Thursday, July 14, 2022. (Samuel Weinstein/Stars and Stripes)

“It’s fitting because the international coalition that acted to liberate Kuwait was one of the great triumphs of American diplomacy, harnessing the power of America’s alliances of America’s partnerships in organizations like the United Nations,” Chollet said.

However, the location has not been without some controversy. One member of the fine arts commission, Elizabeth Meyer, voted against the 23rd Street location in 2018 because of opposition to the large number of war memorials on the National Mall.

The National Desert Storm War Memorial Association aimed for an opening before the end of 2021 so it could commemorate the 30th anniversary of Desert Storm. By law, however, the association had to finish fundraising the entire expected $40 million cost before it could start construction on the memorial. The official sign for the site of the National Desert Storm and Desert Shield Memorial. (Samuel Weinstein/Stars and Stripes)

Kuwait played a major role in the memorial moving forward. The nation pledged $10 million toward the memorial in February 2020.

Salem Abdullah Al-Jaber Al-Sabah, Kuwait’s ambassador to the United States, said the decision to finance the memorial was a tribute to the alliance between the two countries that formed when American troops liberated Kuwait in Desert Storm.

“It is a concrete testament to our ironclad partnership forged and solidified 31 years ago by blood, sweat and tears,” Al-Sabah said at the ceremony, where he and several other members of Kuwait’s government gathered. “While a monument can never fully encapsulate the depth of our indebtedness to this great nation, we nonetheless eagerly await its completion in this great city.”

In March, Kuwait contributed additional funds toward the memorial, which gave NDSWM enough money to move forward with construction plans.

“When we saw that the process was a bit slower than we expected, we said, ‘OK, you know, we’ll step in, and we’ll make this happen,’ ” Al-Sabah told Stars and Stripes. 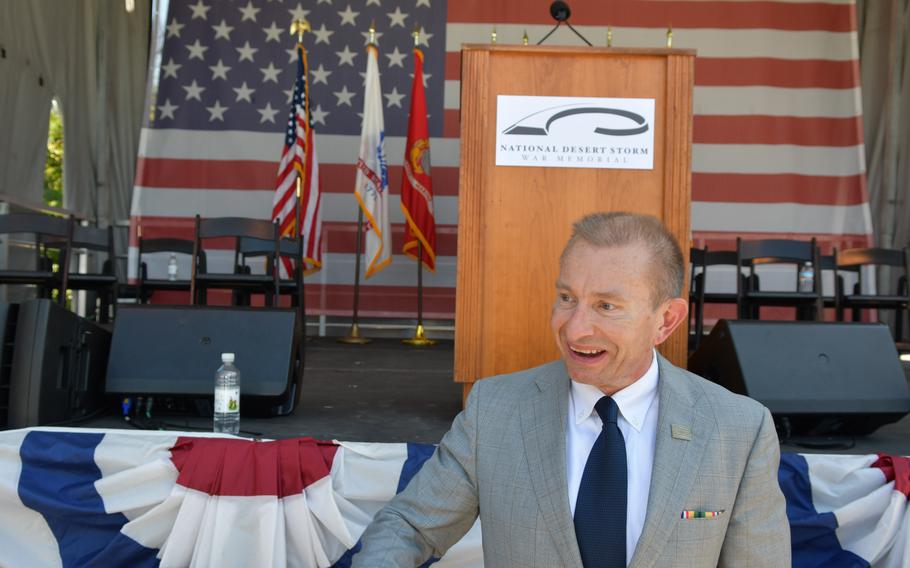 Scott C. Stump is the president and CEO of the National Desert Storm Memorial. (Samuel Weinstein/Stars and Stripes)

NDSWM will lead the construction of the memorial over the next couple of years and hopes that it will be finished before Veterans Day in 2024, Stump said.

The memorial will be shaped roughly like a half circle to commemorate the “left hook” formation that U.S. troops used to move north and then east during Desert Storm, effectively cutting off Iraqi forces in Kuwait.

To Adm. Christopher Grady, who is vice chairman of the Joint Chiefs of Staff and served in Desert Storm, the military’s path and memorial’s shape also represent the strength of America’s troops.

It was “a left hook so ingenious in design and so lethal in execution that reminds us of the indomitable warrior spirit of all of our service men and women,” Grady said at the ceremony.

“While the National Park Service’s role in the care of this memorial won’t start till this is formally dedicated, we have been active in the planning and design,” said Jeffrey Reinbold, superintendent of the National Mall and Memorial Parks.

Stump acknowledged the long delay in construction but said he is glad the process has been carried out “the right way,” without compromising NDSWM’s core principles. When the memorial is finished, he hopes it will be a powerful representation of Desert Storm.

“We want it to be done. It’s time. It’s been over 30 years. It should have been done probably 10 years ago, actually,” Stump said. “It’s just great to see the enthusiasm. It really validates what we’re doing really does mean a lot to a lot of people.” Kenneth Falls, a veteran of Operation Desert Storm, holds a commemorative coin of the U.S. conflict. (Samuel Weinstein/Stars and Stripes)