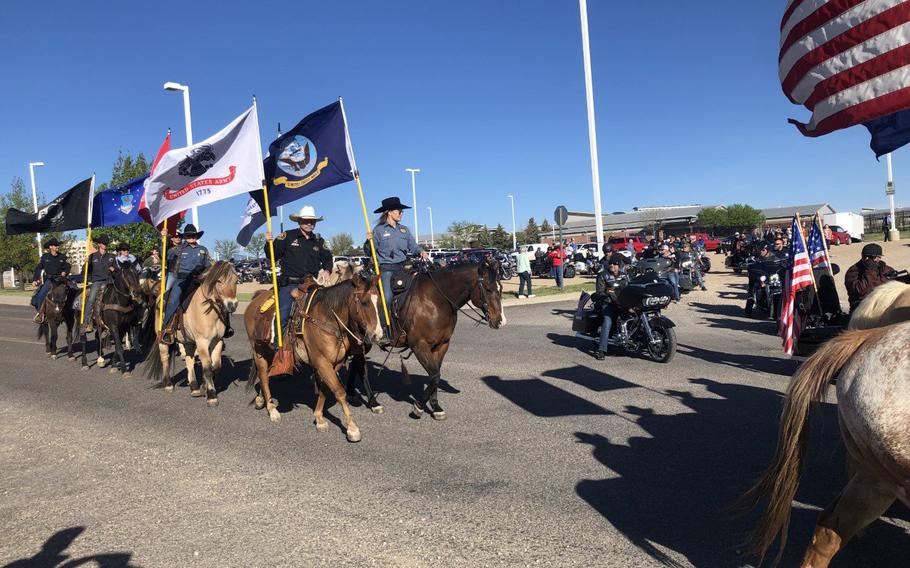 Helicopters, firetrucks, motorcycles and a mounted horse team joined hundreds of well-wishers at The Ranch in Loveland, Colo., Sunday morning to send off the first High Plains Honor Flight since the pandemic started. (Facebook)

(Tribune News Service) —Helicopters, firetrucks, motorcycles and a mounted horse team joined hundreds of well-wishers at The Ranch in Loveland, Colo., Sunday morning to send off the first High Plains Honor Flight since the pandemic started.

A total of 122 veterans and 60 guardians made the trip to Washington, D.C., to see the war memorials that honor them.

"We stand on the shoulders of giants, and I am looking at a room full of giants right now," retired U.S. Air Force Col. Skip Johnson said as he delivered a sendoff speech.

The founder of that group, Stan Cass, focused on World War II veterans, who have become fewer in number through the years.

But veterans of other wars have memorials in Washington dedicated to them, and the High Plains Honor Flight organizers want to make sure they have the chance to see them.

In 2019, announcing the new effort, Voris said he was inspired by the emotions he saw on the faces of the Vietnam veterans who took a flight in September 2018. So he sought permission from Cass' widow to continue the work.

High Plains Honor Flight took its first trip in September 2019, before the COVID-19 pandemic put such outings on hold.

"We will continue to take these flights as long as our community supports the endeavor," Voris told the crowd gathered.

Johnson spoke to the gathered crowd, addressing each group of veterans.

To the World War II veterans: "You liberated a bunch of people who couldn't do it for themselves," he said.

The Korean veterans served in what's called the forgotten war: "Well, I haven't forgotten it," he said, adding that people in South Korea have not forgotten either.

For the Vietnam veterans: "I've got to say it because a lot of people didn't — welcome home."

Johnson urged them to never think their sacrifices were not without great honor.

"We will never treat our veterans the way we treated you," he pledged.

To the veteran of the Gulf War, the "War on Terror" in which Johnson himself served, he said: "We did good work."

No matter which war they served in, the veterans had one thing in common — each had sworn an oath to the country and the Constitution.

Johnson led them in renewing that oath as a way to remember why they served, congratulating them at the end as the newest honorary colonels in the Air Force, then the veterans and guardians boarded four buses to head with police and motorcycle escorts for Denver International Airport, and on to Washington, D.C. They will return Monday.

For details about applying for a flight, volunteering or donating, visit highplainshonorflight.org.