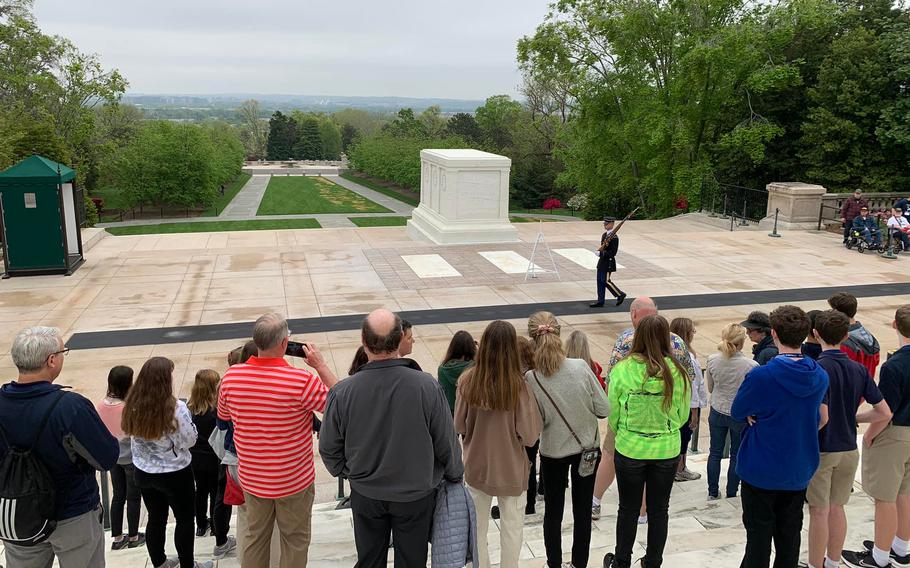 When the Navy veteran from Post Falls found the name of a shipmate he lost 55 years earlier carved into the black granite wall, he couldn’t control his emotions.

“If it would’ve been an older guy, it probably wouldn’t be this bad,” said Dagastine, 75, still choked up after making a charcoal rubbing of the name: Daryl Smock, an 18-year-old sailor who died in what Dagastine called “a pretty hellacious accident” on their Fletcher-class destroyer off the coast of North Vietnam in 1966.

As Dagastine told the story, his eyes drifted back to the memorial’s more than 58,000 names. “So many,” he said. “You turn around and look at how many we lost.”

He was one of 98 veterans from Eastern Washington and North Idaho who made a two-day trip to war memorials in D.C. and Virginia organized by Inland Northwest Honor Flight, the local branch of a national nonprofit founded in 2005. Tony Lamanna, who has organized twice-a-year Honor Flights from Spokane since 2009, said this year’s trip was the first since the COVID-19 pandemic forced the group to delay a visit planned for April 2020.

Twelve of the veterans who were scheduled for the April 2020 trip died during the two-year delay. A dozen more couldn’t make the trip for health reasons, underscoring the mission of Inland Northwest Honor Flight. Veterans of World War II and the Korean War get first priority for the flights, according to the group’s website, as well as any veterans who are terminally ill.

Those who served during the Vietnam War are accepted on a first-come, first-served basis, with a waiting list of about two years.

Bruce Hansen had planned to make the trip two years earlier with his father, David, a Marine Corps veteran from Sagle, Idaho, who died in February. The younger Hansen, who lives north of Seattle in Marysville, still decided to join the group as a “guardian,” one of the dozens of volunteers who helped the veterans during the trip.

“I thought it was just fitting to make sure that I follow through with what we were going to do together,” Hansen said, wearing his father’s jacket, which he lay at the base of the memorial wall.

Pushing a wheelchair for Bill Reilly, an Army veteran from Deer Park, Hansen was careful to say he was wearing the jacket in his father’s honor and was not a veteran himself, but Reilly interjected, “He’s a hero to me.”

Reilly, 76, was looking for the name of his captain who was killed in Vietnam but couldn’t remember if the man’s name was Morris or Morrison. Scanning the thousands upon thousands of names, he said, made him think, “What a waste of life.”

Earlier that morning, the veterans started their day at Arlington National Cemetery, where they watched as soldiers from the 3rd U.S. Infantry Regiment conducted the ceremonial changing of the guard at the Tomb of the Unknown Soldier.

“That is a powerful display,” Dean Evans, an Army veteran from Spokane Valley, said later of the ceremony. “And just the immenseness of the place, and how far it goes back.”

Evans, 72, said the community of veterans is “a brotherhood” no matter where they are.

“Just even when we wear our hats, everywhere you go, you’ve got a friend,” he said. “It kind of serves as a reminder, for me, of the cost of war.”

That cost was on the mind of Emmett McLaughlin, who at age 95 was the oldest member of the delegation and its sole veteran of World War II. He served in the Atlantic from 1944 — when he joined the Navy right out of high school in St. Maries — until 1946, but McLaughlin said it was his first time in the nation’s capital.

While he was getting a lot of attention as the only World War II veteran in the group, McLaughlin said all of the younger veterans are heroes and noted that many of them had borne worse impacts of war.

“Most of them had more time in the service than I had, and more combat, but I feel quite fortunate to be on this trip,” McLaughlin said. “I feel real fortunate that I’m in better physical condition than a lot of these younger ones.”

At the World War II Memorial, Norm Paulson and Bob Moser sat side by side and reflected on the impact of war.

The two men, both 81, have known each other since grade school in Rosalia, Washington, and joined the Navy together.

“It just brings reality to what the war and everything was all about,” said Paulson, who was stationed in the Philippines. “All the lives that were sacrificed to get to where we are today, the freedom we’ve got.”

Moser, who was stationed in Seattle, agreed that seeing the memorials was “very touching.”

Back at the Vietnam Veterans Memorial, Dagastine asked Molly Hanson, a Whitworth University student who volunteered as a guardian on the trip, to hold the paper with the charcoal rubbing of his shipmate’s name. His hands were still shaking with emotion.

“It’s all young guys,” said Randy Bowen, standing next to Dagastine and Hanson.

Because he didn’t personally know any of the names on the wall, Bowen said, he looked for someone from near his home of Kamiah, Idaho, and found a soldier who was killed at age 22.

The 70-year-old Navy veteran served from 1969 until 1991, including tours in Vietnam and Operation Desert Storm.

Hanson, 20, said she decided to volunteer in honor of a relative who served in the military but couldn’t make the trip. She is part of the Army ROTC program at Gonzaga University and said being part of the Honor Flight group made her want even more to serve in the military, “just to have this connection with other people and the camaraderie.”

Hanson said she was especially moved by seeing Dagastine grieving the loss of his friend.

“In order to feel pain, you need to love somebody, and it’s really powerful for me to see somebody be this upset about somebody that they lost,” she said. “I realize how powerful it is to serve for your country, and how real these people are.”

Orion Donovan-Smith’s reporting for The Spokesman-Review is funded in part by Report for America and by members of the Spokane community. This story can be republished by other organizations for free under a Creative Commons license. For more information on this, please contact our newspaper’s managing editor.