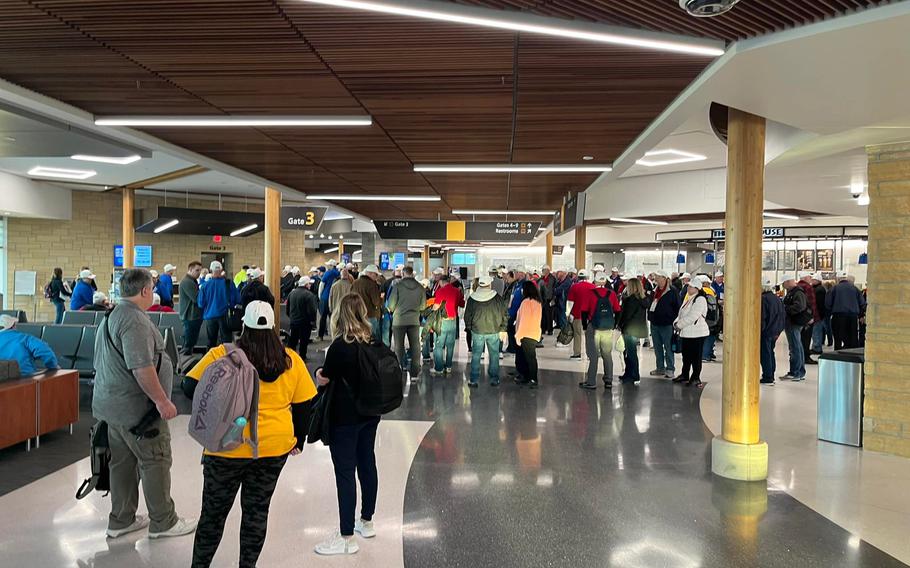 CEDAR RAPIDS, Iowa (Tribune News Service) — For many veterans, this year’s Eastern Iowa Honor Flights will be the culmination of a realization they’ve struggled with since they came home from war: that they’re worthy.

With about 89 veterans on the first flight of the year taking off early Tuesday, the Honor Flight will visit eight veteran memorials and sites over a 15-hour round-trip to Washington, D.C. For many, the sites will be a tool to forge new friendships, tell old stories to new audiences and unlock healing from the war they served in.

“Vets talk to vets,” said Roger Uthoff, adviser to the Honor Flight and Navy veteran. “They don’t necessarily talk to their own families.”

For veterans, spending an entire day with people who have had similar experiences and seeing memorials honoring their service is a powerful conversation starter. Most veterans have a mentality that they’re not worthy of the honor, Uthoff said. It can take persistent persuasion to persuade them otherwise — even if that means filling out the paperwork for them.

“Our philosophy is: you signed the piece of paper enlisting or drafting — you served,” he said. “And it’s the luck of the draw where you went.”

For some, the revelation of being thanked in a larger magnitude than they’re used to can be life changing.

“I’ve heard stories of family members who said their dad was a completely different person after they went” on an honor flight, said Lynette Gitlins, veteran coordinator and Naval Reserves veteran. “Either they got to let go of anger or were able to share the stories they’d never been able to share before.”

The backlog created by the pandemic’s pause on Honor Flights, which resumed in September, exacerbated the problem. This year, 15 people waiting on the list for an Eastern Iowa flight had died by the time their numbers were called.

Now on the 42nd Eastern Iowa Honor Flight, World War II vets are becoming few and far between. And with each one’s passing, a little bit of knowledge is lost with them.

For Vietnam veterans, in particular, the homecoming they’ll receive after returning on the flight to Cedar Rapids will be more grand than they received when returning home nearly 50 years ago. At best, their first homecomings were mostly uneventful.

What it takes to plan an Honor Flight

It takes dozens of volunteers, a year of planning and about $100,000 to make each flight happen like clockwork over the course of a long day.

This year’s first flight, named after the Cedar Rapids Iowa City Building Trades Council, recognizes the fundraising of the annual Solidarity Ride organized by Troy Sauter and Mike Sadler, now in its 12th year. Over the last four years, they raised $60,000 to support the flight.

Sauter and Sadler, both of whose fathers served during the Vietnam War, heard the good things the Honor Flight had done. Now, Sauter will see what it can do for his father, who will be on this year’s flight.

“Seeing our fathers ... and understanding the treatment that Vietnam vets got at home, I think this is a wonderful opportunity to show respect to the individuals who didn’t get it in the past,” Sauter said.

“(Donors) have realized that they’re thankful for people who gave their time for military service,” said Dick Bell, president of the Eastern Iowa Honor Flight.

Each year, he said many are eager to fundraise. Flight naming encourages long-term fundraising, Bell said.

But each year that the Solidarity Ride was approached, the conversation felt more like an interview than a solicitation, Sauter said. Before their fundraising began, they were vetted.

“They wouldn’t just accept money from us, they wanted to make sure it’s a partnership that works long term, that it has the right reputation, the right vision,” he said.

About one-third of each flight is funded by guardians who accompany veterans, and the rest by donations and sponsorships.

Veterans will begin reporting into The Eastern Iowa Airport at 5:45 a.m. Tuesday with an estimated departure time of 7:15 a.m. Estimated return time to Cedar Rapids, barring any delays, is 8:45 p.m. The public is encouraged to welcome veterans home upon their return to the airport.