'We weren’t supposed to be here': Veterans, advocates watch and wait for burn pits bill to pass 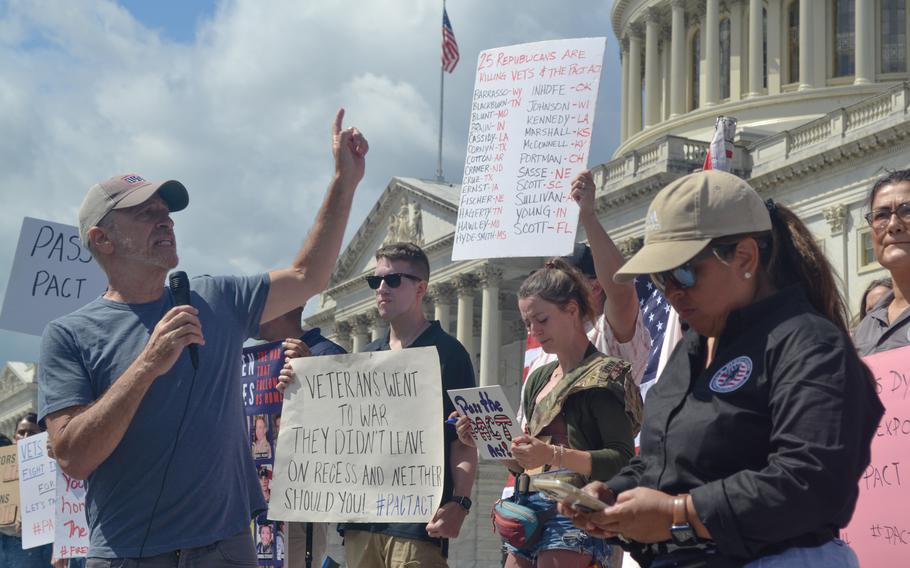 Comedian Jon Stewart and Rosie Torres, co-founder and executive director of veteran organization Burn Pits 360, lead a rally at the Capitol building in Washington on Monday, Aug. 1, 2022. Stewart and Torres joined veterans and advocates who have been protesting on the building’s steps since last week after 25 senators voted against burn pits legislation. (Sara Samora/Stars and Stripes)

WASHINGTON — Dozens of veterans and advocates have slept on the steps of the U.S. Capitol building through heat and rain since Thursday after 25 Republican senators blocked legislation that would expand eligibility for health care and benefits for veterans exposed to burn pits and other toxins.

A rally at the Capitol was set for Thursday as a final push for the bill’s approval but instead it turned into a display of anger and frustration over the delay with the Senate set to go on recess in August, leaving the bill with an uncertain future.

“We weren't supposed to be here,” said Patrick Murray, national legislative service director for the Veterans of Foreign Wars. “Last week, we were talking about coordinating a celebratory press conference, sit around, pat ourselves on the back and say, ‘Job well done.’ Years worth of work finally coming together because the PACT Act was going to get passed and then 25 senators flipped their vote.”

The revised legislation drew 55 votes in the Senate — short of the 60 needed to end debate on the bill and overcome a filibuster. Twenty-five Republicans who previously supported versions of the bill voted against it on the procedural vote.

Rosie Torres, co-founder and executive director of the advocacy group Burn Pits 360, said her husband, Army Reserve veteran LeRoy Torres, deployed to Camp Anaconda in Iraq and returned with terminal lung disease, toxic brain injury and autoimmune issues. And he’s not the only veteran who became sick after returning from overseas deployment, she said. 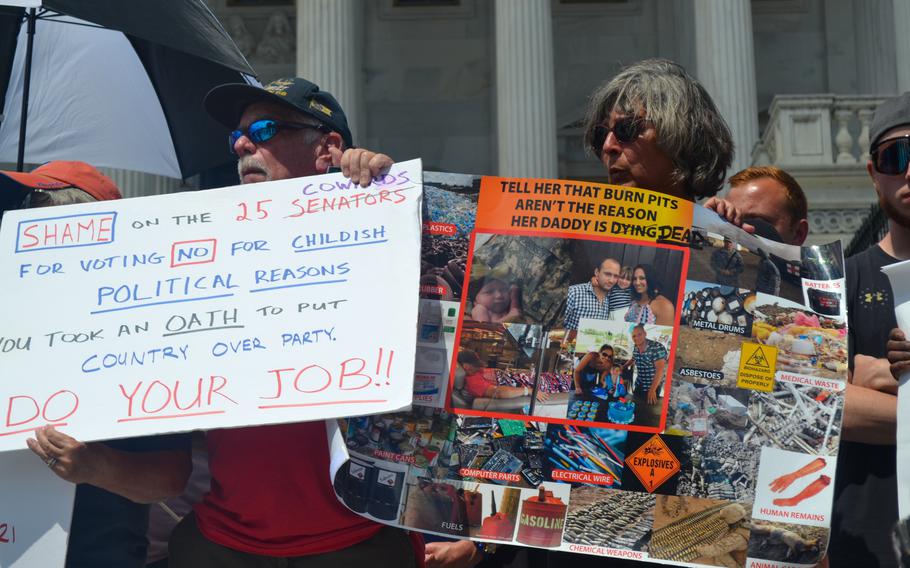 Protesters on the steps of the Capitol in Washington on Monday, Aug. 1, 2022, calling on the Senate to pass the PACT Act — legislation that would expand eligibility for health care and benefits for veterans exposed to burn pits and other toxins. (Sara Samora/Stars and Stripes)

“All these men and women that you see here, behind me, next to me, their bodies are plagued by the same deployment-related health effects. So it doesn't matter what I've done for 13 years, or [that] we sat here and talked about how many people flip their votes,” Torres said Monday outside the Capitol. “What matters is the number of people dying, the number of people sick, these men and women fought for all of your freedoms, and Congress has turned their backs on them. It's shameful, and it's criminal, and it’s disgusting.”

In May, Sens. Jon Tester, D-Mont., chairman of the Senate Veterans’ Affairs Committee, and Jerry Moran of Kansas, the ranking Republican on the committee, introduced the PACT Act. The senators have called the legislation historic and long overdue.

The bill also would improve the VA’s workforce and claims processing to speed up efforts to meet the needs of veterans and establish 31 new VA health care facilities in 19 states. Additionally, the bill would expand health care eligibility to post-9/11 combat veterans and add 23 conditions related to burn pits and other toxic exposures to the VA’s list of service presumptions. It will also expand the list of presumptions related to Agent Orange exposure to include Thailand, Cambodia, Laos, Guam, American Samoa and Johnston Atoll, strengthen federal research on toxic exposure, and improve the VA’s resources and training. The Congressional Budget Office reported in June that the PACT Act’s cost estimate would be more than $600 billion.

“This government should be soaring to heights not playing limbo, and trying to get underneath the bars that don't mean anything, and so can we please not force veterans disabled from their heroism and sacrifice to stand outside the Capitol building, days on end waiting for this Congress to do the thing they already did on June 16?” Stewart said.

Sen. Pat Toomey, R-Pa., one of the 25 senators who voted against the bill, said last week that the PACT Act included more than $300 billion to be spent in the next 10 years unrelated to veterans, and it was a concern for him and other senators.

On Tuesday, Tester sent a letter to every member of the upper chamber addressing the issues that some Republican senators have targeted in the bill.

“The charge that this bipartisan legislation creates a ‘slush fund’ that will be spent on unrelated things is false,” Tester wrote in the letter dated Aug. 2. “The Toxic Exposures Fund covers the direct costs of toxic exposure-related health care under the bill’s expansion of eligibility. In doing so, it designates these costs as separate from VA’s discretionary budget — thereby ensuring care for newly eligible veterans is not provided at the expense of veterans seeking care for non-toxic-related conditions.”

The Senate is expected to vote again on the PACT Act as early as Tuesday evening.

Senate Majority Leader Chuck Schumer, D-N.Y., said Toomey and Sen. Rand Paul, R-Ky., who also voted against the bill, have been offered votes on their requested amendments to the PACT Act.

“We hope to reach an agreement where we can act on this bill as soon as [Tuesday], but for that to happen, our colleagues on the other side of the aisle should work with us in good faith,” Schumer said.