Biden to use State of the Union to announce plans for easing access to care, benefits for vets exposed to toxic burn pits 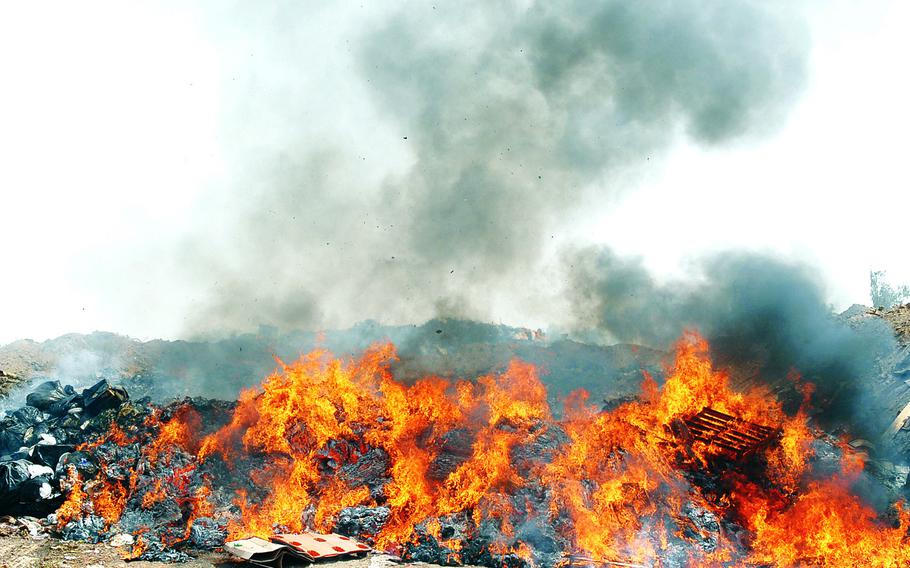 The burn pit at Balad Air Base, Iraq, was in full operation in 2008. President Joe Biden on Tuesday, March 1, 2022, during his State of the Union address is scheduled to announce plans to provide health care and disability compensation to more veterans who are suffering the effects of toxic exposure. (Stars and Stripes)

WASHINGTON — President Joe Biden on Tuesday night during his State of the Union address is scheduled to announce plans to provide health care and disability compensation to more veterans who are suffering the effects of toxic exposure, according to a senior administration official.

The Department of Veterans Affairs will soon initiate a federal rulemaking process to add nine rare respiratory cancers to the department’s presumptive list, according to the official. Being on the list means the government acknowledges a veteran’s military service caused their medical condition, and it lowers the amount of evidence that a veteran must provide to receive benefits.

Biden also will announce his support for legislation that would expand health care and disability compensation to veterans who served in areas where they were exposed to toxic burn pits, according to the senior administration official, who spoke to reporters Tuesday on the condition of anonymity.

“The president has been clear he wants a bill to make it to his desk that he can sign that will expand health care and deliver benefits for those who’ve experienced the harmful health effects associated with toxic exposures,” the official said.

Biden, facing a stalled domestic agenda, will use his first State of the Union address to lay out a “unity agenda” that includes policies that Democrats and Republicans have historically supported, the official said. Proposed policymaking for veterans is part of the strategy.

Momentum has been building in Congress during the past several years to support veterans who developed illnesses after being exposed to open-air burn pits, which were used throughout the 1990s and the post-9/11 wars to burn garbage, jet fuel, paint, medical waste and plastics. Veterans diagnosed with cancers, respiratory issues and lung diseases at young ages have sought VA benefits and health care, but the department contended for years that there wasn’t sufficient evidence to link the illnesses to their military service.

Capitol Hill lawmakers agree about the need to address the issue, but they’re working on two competing strategies.

The Senate passed a bill last month that would expand health care to more veterans who served in areas with toxic burn pits, but it doesn’t address benefits, such as disability compensation. The leaders of the Senate Veterans’ Affairs Committee, who sponsored the bill, insisted the measure is just a first step in a three-phase approach that would provide health care and benefits incrementally. The cost of the bill totals $1 billion, according to the office of Sen. Jon Tester, D-Mont., chairman of committee.

The House, on the other hand, is attempting to pass one large bill that would expand health care to about 1.5 million veterans while also making millions of veterans newly eligible for disability compensation. According to the Congressional Budget Office, that measure would cost about $208 billion for the next decade.

Rep. Mark Takano, D-Calif., the chairman of the House Committee on Veterans’ Affairs, is expecting that bill to be voted on this week in the House.

Rep. Mike Bost of Illinois, the ranking Republican on the committee, prefers the Senate’s measure and criticized House Democrats on Monday for not working with Republicans and “failing to be fiscally responsible.”

The senior administration official would not say Tuesday which bill Biden supports.

“[The White House] is not going to opine on the specific legislative discussions that are happening between the Senate and the House,” the official said.

As Congress debates larger reform efforts, the VA is moving ahead with adding illnesses to its presumptive list. Contending there was enough evidence to link the conditions to burn pit exposure, the department in August added three conditions to the list: asthma, rhinitis and sinusitis. According to the White House, the VA has so far approved 12,000 benefits claims for veterans and survivors affected by the diseases, amounting to $36 billion in benefits payments.

The proposal to add the conditions will be posted to the Federal Register and go through a public comment period. A date was not given for when the proposal would be posted. It was also uncertain how many veterans would be affected by the action.

“The proposed rulemaking will get underway in earnest, and we are committed to a very timely and efficient review process so that we can ensure that we can deliver services and benefits to the veterans affected by these rare cancers just as quickly as possible,” the senior administration official said.

Biden had also ordered the VA to consider constrictive bronchiolitis for the presumptive list. The condition will not be part of the new proposal, and the VA is continuing to review scientific research to determine whether there is enough of a connection, the White House said.

Biden will also announce Tuesday the creation of a network of specialized medical providers to help veterans who have concerns about their toxic exposure. According to the White House, the VA plans to hire 73 medical workers who specialize in toxic exposures. The department will establish a call center by January 2023 that will answer calls from veterans about their exposures and connect them with the specialists.

In addition to announcements regarding toxic exposures, Biden plans to talk about veterans in other ways during the State of the Union. The White House released information Tuesday about a new effort Biden will announce to connect veterans to same-day mental health care.

“He’ll talk specifically about prioritizing mental health care for those experiencing the invisible wounds of war,” the senior administration official said. “He'll talk about the need to reduce veteran suicide. He’ll reinforce the need to support our veterans in finding jobs and ensuring women and LGBTQ veterans receive the appropriate services that they need.”