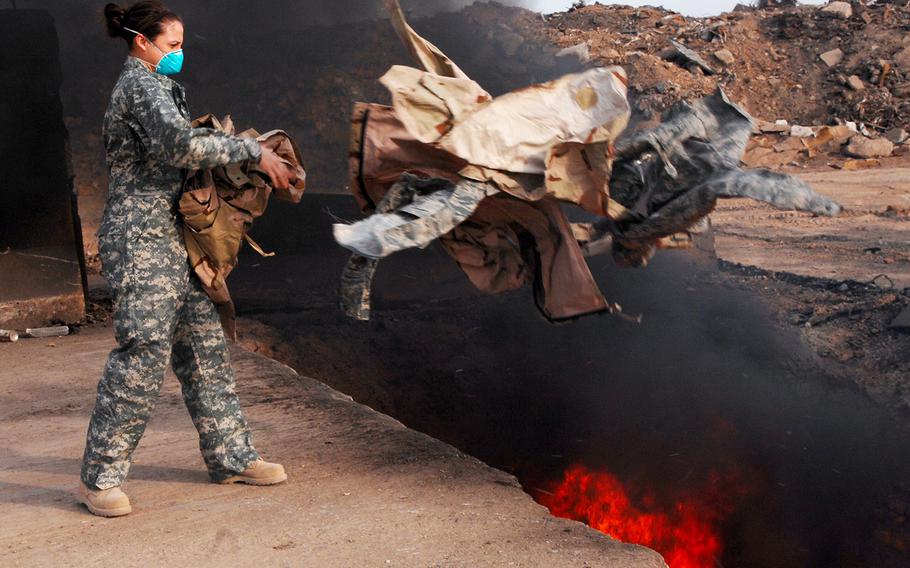 WASHINGTON — The Senate passed a bill Wednesday that would provide health care to veterans suffering from illnesses caused by exposure to toxic burn pits, but some critics say the measure doesn’t go far enough.

The Senate approved the Health Care for Burn Pit Veterans Act in a voice vote. It now goes to the House, where some lawmakers are pushing for more comprehensive legislation that would provide health care and disability compensation to veterans exposed to burn pits.

Sens. Jon Tester, D-Mont., and Jerry Moran, R-Kan., who sponsored the Health Care for Burn Pit Act, said the Senate bill is the first step in a longer, three-phase strategy.

“Our bill is a necessary step in connecting an entire generation of veterans with the VA care they need and cannot wait for any longer,” said Tester, the chairman of the Senate Committee on Veterans’ Affairs. “This kind of swift action is a testament to what can be accomplished when we all row in the same direction, and I encourage my House colleagues to join us in getting this bill across the finish line to quickly deliver relief where it’s most needed.”

The goal of the bill is to close gaps in eligibility criteria that prevent about 1 million post-9/11 veterans from accessing care through the Department of Veterans Affairs, Tester’s office said.

Veterans now can receive health care through the VA for up to five years after their discharge for any condition related to service in Iraq and Afghanistan. The Health Care for Burn Pit Veteran Act would extend that period to 10 years.

In addition, the bill would grant access to VA health care to every combat veteran who served after November 1998 with a discharge date after Sept. 11, 2001.

The legislation would also boost research into the effects of toxic exposure and increase training on the subject for VA employees.

Some veterans organizations support the measure, but they stressed Wednesday the need for more encompassing changes.

“While we thank Chairman Tester and Ranking Member Moran for taking a first step to address this issue, we emphasize that there is still more work to be done,” said Jose Romas, a vice president at Wounded Warrior Project. “No veteran who suffered burn pit exposure should ever be turned away from VA care, regardless of whether they served 10 years ago, 20 years ago, or longer.”

Moran is the ranking Republican on the Senate VA committee.

The Senate’s plan includes introducing subsequent measures to provide disability benefits for veterans exposed to burn pits and establish a new process for the VA to determine which conditions to place on its presumptive list. Conditions on the list require less evidence to be approved for benefits.

The House Committee on Veterans’ Affairs has been working on one comprehensive reform bill, the Promise to Address Comprehensive Toxics Act, which would overhaul the VA’s process of handling claims of toxic exposure and significantly increase payouts to veterans who served near burn pits.

The House bill would increase spending by more than $281 billion during the next decade because of the expanded eligibility for disability compensation, according to estimates from the Congressional Budget Office. Under the bill, about 1.5 million additional veterans would become eligible for VA health care, and 2 million veterans would qualify for disability compensation.

The Senate bill, which focuses solely on health care, comes with a price tag of about $1 billion, Tester said.

The two chambers are in negotiations on the issue. VA Secretary Denis McDonough said Wednesday that the department is “staying out of giving our positions on these things.” The agency is providing only technical help to lawmakers to ensure the bills are accurate, he said.

“Here’s what I’ll say: I think it’s important Congress is heard on these questions,” McDonough said. “But we’re spending our time moving out as aggressively as we can with the authority we already have.”

While Congress debates the bills, the VA has moved forward with granting a pathway to benefits and health care for some veterans exposed to burn pits.

McDonough implemented a new approach to consider conditions for inclusion on the department’s presumptive list. While previous efforts relied heavily on studies from the National Academies of Sciences, Engineering, and Medicine, the new approach looks more broadly at research and data from other sources, as well as claims being filed by veterans, the secretary has said.

The department, at the direction of President Joe Biden, is now reviewing research into several rare cancers, including squamous cell carcinoma of the larynx and salivary gland tumors, as well as lung cancers and constrictive bronchiolitis.

McDonough said Wednesday that the VA would soon have an update about the review into those cancers, though he did not give a specific timeline.