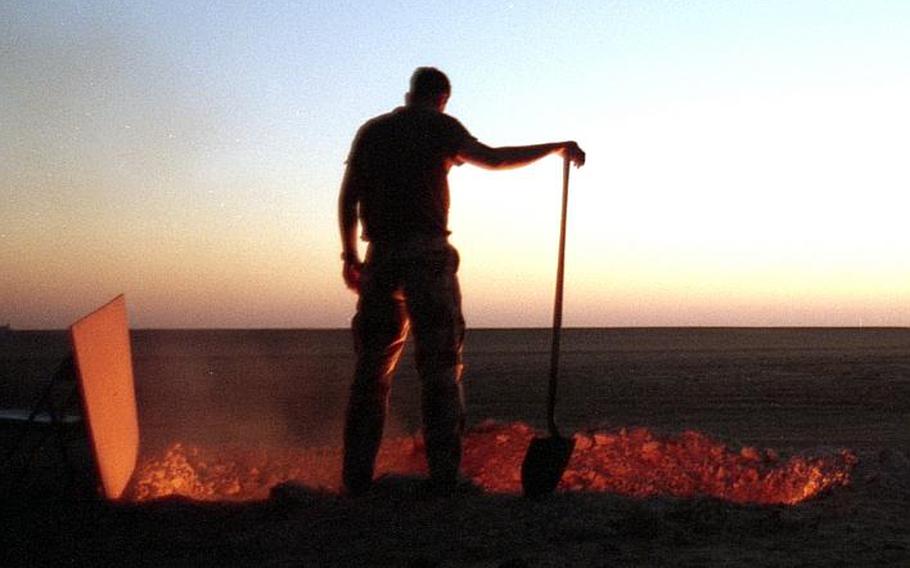 An American servicemember in the Saudi Arabian desert in 1991 tends a burning trash pit. (Stars and Stripes)

WASHINGTON – Democrats and veterans advocates pushed back Wednesday against concerns from Republicans about the high cost of a bill that aims to fast-track Department of Veterans Affairs health care and benefits to millions of veterans exposed to toxic burn pits.

The House Committee on Veterans’ Affairs held a roundtable Wednesday to discuss the Promise to Address Comprehensive Toxics Act, a plan that would reform the VA’s process of handling claims of toxic exposure and significantly increase payouts to veterans who served near burn pits in Iraq and Afghanistan.

Democrats and a dozen veterans organizations applauded the effort Wednesday, describing it as a “comprehensive solution” for veterans suffering the effects of burn pits. Rep. Mark Takano, D-Calif., the chairman of the House committee, said the bill would soon be taken to the House floor for a vote.

Republicans, however, warned the legislation had no chance of passing through Congress in its current form. The main point of contention is its cost.

The bill would increase spending by more than $281 billion during the next decade because of the expanded eligibility for disability compensation, according to estimates from the Congressional Budget Office. The office estimated the bill would cost an additional $146 billion in the following 10 years for the expansion of health care.

“We don’t have hundreds of billions of dollars of offsets sitting around,” said Rep. Mike Bost of Illinois, the ranking Republican on the committee. “I remain committed to finding a way to support toxic-exposed veterans in a way that is fiscally responsible for future generations. Veterans are taxpayers, too. We should be mindful how we spend their money on their behalf.”

Under the bill, about 1.5 million additional veterans would become eligible for VA health care, and 2 million veterans would qualify for disability compensation.

Throughout the 1990s and the post-9/11 wars, the military used open-air pits to burn garbage, jet fuel, paint, medical waste, plastics and other materials. Veterans diagnosed with cancer, respiratory issues and lung disease at young ages have blamed exposure to the toxic fumes. They have sought VA benefits and health care, but the department contended for years that there wasn’t sufficient evidence to support their claims.

The PACT Act would add 23 of those cancers and respiratory illnesses to the list of conditions that would qualify veterans for VA benefits and health care.

The bill also addresses other types of toxic exposure. The bill calls for presumptive benefits for Vietnam War veterans who have developed hypertension because of exposure to chemical herbicides, as well as veterans who served in Thailand, Laos and Cambodia and were potentially exposed to herbicides. It also includes veterans who participated in toxic cleanup activities in Enewetak Atoll or Palomares, Spain.

The process now for receiving VA health care and benefits is “cumbersome” and places the burden on veterans, Takano said.

“The [Congressional Budget Office] estimate is in. Now we know the true cost of our promise,” he said. “But we cannot renege on our responsibility to toxic-exposed veterans because of any preconceived sticker shock.”

Bost argued the committee was “beating a dead horse” by discussing a bill that had no chance of approval. He asked the bill include more rigid criteria to designate which veterans would be eligible for benefits and health care. He also suggested the bill be split, and that Congress first focus on getting veterans health care before expanding the eligibility for disability benefits.

Bost faced pushback on those ideas. Comedian Jon Stewart, who was part of the roundtable Wednesday, argued against adding specific criteria to eligibility or splitting the bill to first address health care. Stewart became a fierce advocate for 9/11 responders who developed illnesses from toxic fumes at the destroyed World Trade Center. He recently turned his attention to veterans suffering from diseases caused by burn pits and other toxic environments.

“If you’re sick with pancreatic cancer and don’t have the benefits, what are you living on?” Stewart asked. “The idea of splitting everything up and doing it piecemeal and creating more bureaucratic processes on this is unacceptable.”

While Congress debates the bill, the VA has moved forward with granting a pathway to benefits and health care for some veterans exposed to burn pits.

VA Secretary Denis McDonough implemented a new approach to consider conditions for inclusion on the department’s presumptive list. While previous efforts relied heavily on studies from the National Academies of Sciences, Engineering, and Medicine, the new approach looks more broadly at research and data from other sources, as well as claims being filed by veterans, McDonough has said.

The department, at the direction of President Joe Biden, is now reviewing research into several rare cancers, including squamous cell carcinoma of the larynx and salivary gland tumors, as well as lung cancers and constrictive bronchiolitis.

McDonough said Tuesday that the VA would soon have an update about the review into those cancers.

“The president was very clear, and I've told you guys about the urgency he feels on this,” McDonough said. “I feel that urgency quite profoundly.”