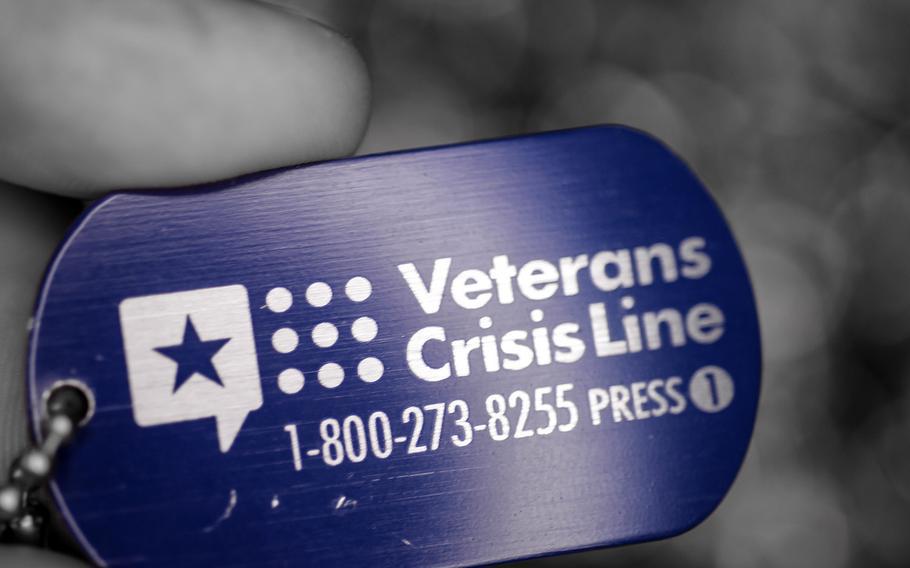 The Veterans Crisis Line has had an increase of texts, calls and online chats since mid-August when the Taliban took control of Afghanistan's capital Kabul and the crisis at the city's airport began, VA officials said. ()

WASHINGTON — The crisis hotline for veterans experienced a 98% increase in the number of texts that it received during the last two weeks of August compared to the same two weeks last year.

Calls to the Veterans Crisis Line increased 7% and online chats increased by nearly 40% during the same time period, from Aug. 13 to 29. Department of Veterans Affairs officials attribute the increase to multiple factors, including the withdrawal of U.S. forces from Afghanistan and the upcoming 20th anniversary of the 9/11 terrorist attacks.

VA officials also said there’s an increased awareness of the hotline since last year and there’s not as much stigma about utilizing the resource.

“The more we can do to normalize discussions about crisis and suicide, that increases our call volume,” said Lisa Kearney, director of the Veterans Crisis Line. “We’re reaching more people to get them care and support. So, I’m thankful for it.”

The VA has been tracking an increased usage of the hotline since the Taliban overthrew the Afghanistan government in mid-August and the United States began a frenzied effort to evacuate Americans and Afghan allies from the country. Thirteen U.S. service members were killed Thursday in an attack on the Hamid Karzai International Airport in Kabul by the Afghanistan branch of the Islamic State. The U.S. troops were working to evacuate people.

The U.S. military ended its withdrawal Monday, concluding its 20-year mission in Afghanistan.

Matthew Miller, national director of the VA’s suicide prevention program, said he’s received numerous questions about how the withdrawal is affecting the mental well-being of Afghanistan War veterans. The increase in calls and texts to the hotline helps to reveal some of the effects, Miller said.

“I think it’s really hard to speak for veterans as a whole because veterans are an extremely diverse group,” he said. “[The hotline] gives a small sample, but a meaningful look at what’s occurring within the veteran population.”

The VA compared the number of calls, chats and texts to the same time period last year, rather than earlier in 2021, because usage increases or decreases depending on the time of year. August, September and October are the hotline’s busiest months, Miller said.

The VA does not ask veterans for demographic information on the calls, so it’s not clear how many texts or calls have been initiated by Afghanistan War veterans, Miller said. However, veterans ages 18 to 34 are more inclined to use chat or text, rather than calling the hotline.

But the withdrawal from Afghanistan has prompted some Vietnam War veterans to use the hotline, too.

“I don’t want this to come across as being a post-9/11 specific issue,” Miller said. “We have veterans from the Vietnam era who have been contacting us who are incorporating what they’re seeing on the news into their process of working on what they experienced as a result of their service.”

The Veterans Crisis Line is operated by responders at three call centers in Canandaigua, N.Y., Topeka, Kan., and Atlanta. To handle the influx of calls in recent weeks, the hotline has been using its backup centers, Kearney said.

On Tuesday, 34 senators wrote to VA Secretary Denis McDonough, asking him to increase outreach to post-9/11 veterans about the mental health resources available to them. They referenced VA data that show suicide rates are lower among veterans who use VA care.

“We ask that the VA develop a comprehensive outreach plan to connect Afghanistan and Global War on Terrorism veterans to VA benefits and services,” the senators wrote. “This plan must proactively contact veterans in the coming months through means including, but not be limited to, digital correspondence, social media, phone calls, and text messages.”

Jeremy Butler, CEO of Iraq and Afghanistan Veterans of America, said he supported the idea of a “sustained, comprehensive plan to reach veterans.”

A group of House Republicans called on Rep. Mark Takano, D-Calif., the chairman of the House Committee on Veterans’ Affairs, to hold a hearing regarding veterans’ mental health following America’s withdrawal from Afghanistan.

Rep. Mike Bost, R-Ill., the ranking Republican on the committee, led the letter written to Takano, in which he described the withdrawal as a failure of President Joe Biden’s administration.

“We must convey to our nation’s veterans that their service and sacrifice have not been in vain, and that despite political failures in Washington, they are heroes who have indeed accomplished their mission in Afghanistan and left the world a better, safer place,” the Republicans wrote.

Takano issued a statement Tuesday defending Biden’s decisions about Afghanistan and encouraged people to “reach out to the veterans in your lives.”

Veterans who want to contact the Veterans Crisis Line can dial 1-800-273-8255, and then press 1, or text the crisis line at 838255. An option to chat online is available at veteranscrisisline.net.