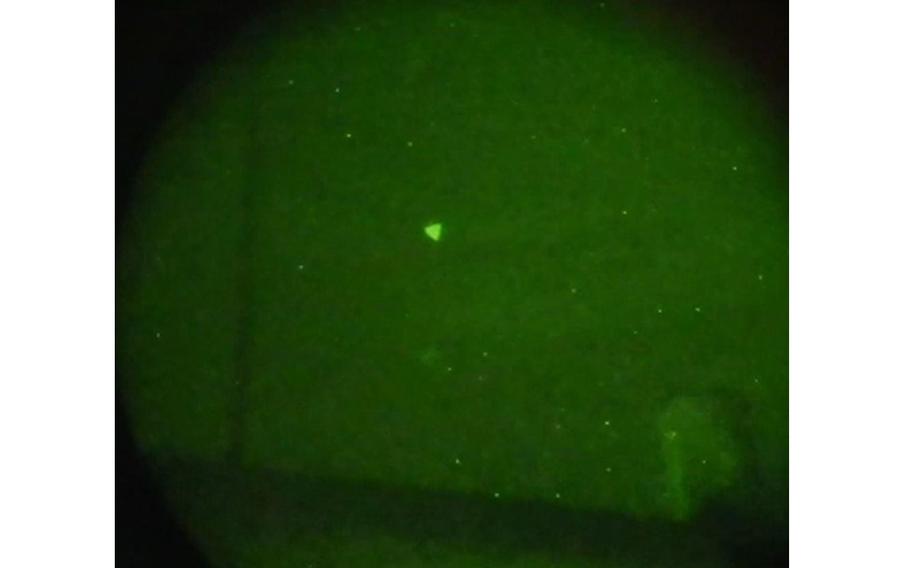 This is a Navy image of an unidentified aerial phenomena captured during naval exercises off the East Coast of the United States in early 2022. The image was captured through night vision goggles and a single lens reflex camera. Based on additional information and data from other sightings, the UAP in this image were subsequently reclassified as unmanned aerial systems. (Department of Defense)

WASHINGTON — There have been hundreds of new reports of unidentified aerial phenomena — the government’s term for UFO-type sightings — and many of them remain unexplained, according to a new intelligence report.

The Office of the Director of National Intelligence issued the report Thursday and sent the classified version to Congress. The unclassified 11-page version notes roughly 350 new UAP sightings from March 2021 to Sept. 1, 2022.

The intelligence agency is required by law to produce the UAP report, and the Pentagon’s All-Domain Anomaly Resolution Office is tasked with investigating the sightings.

The AARO determined 163 of the new sightings appeared to involve balloons or balloon-like entities, according to the report. About two dozen appeared to be drone or drone-like vehicles, and a handful of others appeared to be “clutter.”

The Pentagon office is putting more effort into studying the other 171 reported sightings for which investigators have no preliminary explanation, the report states.

“The majority of new UAP reporting originates from U.S. Navy and U.S. Air Force aviators and operators who witnessed UAP during the course of their operational duties,” the report states. “Regardless of the collection or reporting method, many reports lack enough detailed data to enable attribution of UAP with high certainty.”

In 2020, the Pentagon created a task force to study mysterious aerial phenomena reported by military personnel. With a dedicated team now available to study strange flying objects, it was expected the government would receive many more UAP sightings — an expectation confirmed by Thursday’s report.

In early 2021, for example, the national intelligence office said there had been just 144 sightings reported in the previous 17 years. Some of the reported sightings have been captured on video, including three from the Navy that were declassified in early 2020.

Thursday’s assessment found none of the sightings have yielded evidence or indications of extraterrestrial life — but one of the ongoing concerns, it notes, is that the unexplained objects might still be dangerous.

“UAP events continue to occur in restricted or sensitive airspace, highlighting possible concerns for safety of flight or adversary collection activity,” the report states. “This may result from a collection bias due to the number of active aircraft and sensors, combined with focused attention and guidance to report anomalies.”

The report underscores that some of the sensitive areas tied to the sightings include nuclear power plants and military depots where nuclear weapons are possibly stored.

“Analyzing and understanding the potential threats posed by UAP is an ongoing collaborative effort,” Air Force Brig. Gen. Pat Ryder, the Pentagon’s top spokesman, said in a statement. “The safety of our service personnel, our bases and installations, and the protection of U.S. operations security on land, in the skies, seas, and space are paramount. We take reports of incursions into our designated space, land, sea, or airspaces seriously and examine each one.”

The study concludes greater awareness for UAPs will continue to produce more sightings and government agencies will have to try to determine what they are and where they came from.