NASA joins the hunt for UFOs 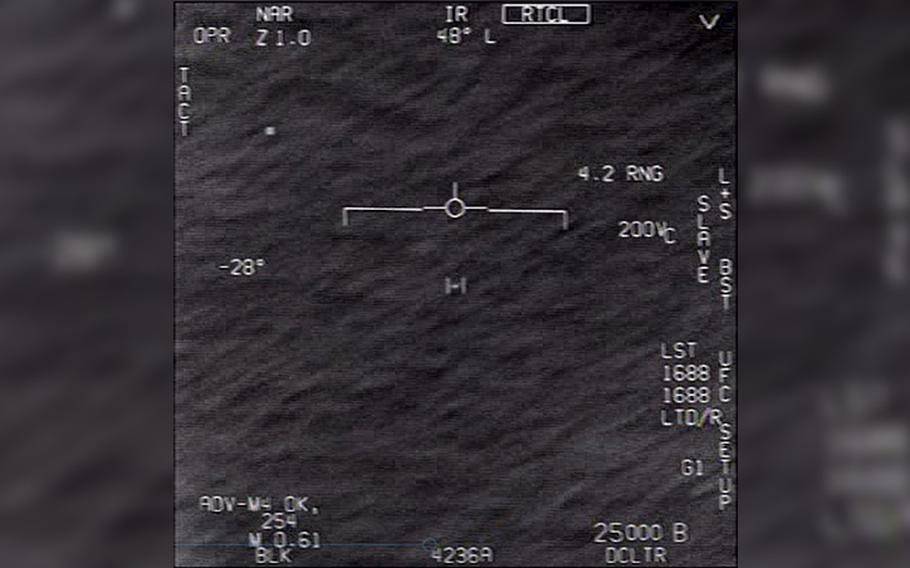 A still image from video recorded by a U.S. Navy aircraft shows a UFO over open water off the coast of Florida in 2015. (U.S. Navy)

WASHINGTON — NASA is joining the hunt for UFOs, a top space agency official said Thursday, forming a team that would examine "observations of events that cannot be identified as aircraft or known natural phenomena."

The space agency would bring a scientific perspective to efforts already underway by the Pentagon and intelligence agencies to make sense of dozens of such sightings, Thomas Zurbuchen, the head of NASA's science mission directorate, said during a speech before the National Academies of Science, Engineering, and Medicine. He said it was "high-risk, high-impact" research that the space agency should not shy away from, even if it is a controversial field of study.

The announcement comes just weeks after a rare and historic hearing before Congress on sightings of what the Defense Department calls Unidentified Aerial Phenomena, more commonly known as UFOs, and a report issued last year by the director of national intelligence that catalogued more than 140 flying objects that officials were not able to identify.

The nine-page report and the congressional hearing, however, were short on specifics and did not draw any definitive conclusions on what the flying objects were, many of which were spotted by naval aviators. Officials said they did not find any evidence that the objects were some sort of advanced aerospace technology developed by China, Russia or other nations. There was also no evidence that they came from extraterrestrial sources.

The limited number of such observations makes it difficult "to draw scientific conclusions about the nature of such events," NASA said in a statement. The agency said it was concerned not just about national security but also the safety of flying in the air. It also said, "There is no evidence UAPs are extra-terrestrial in origin."

Still, NASA said it wants to apply scientific rigor to a vexing issue that has been a fixation for generations. Studying UAPs fits into the agency's mission of looking for signs of life beyond Earth, from studying water on Mars to exploring the moons of Saturn and Jupiter, the agency said.

"NASA believes that the tools of scientific discovery are powerful and apply here also," Zurbuchen said in a statement. "We have the tools and team who can help us improve our understanding of the unknown. That's the very definition of what science is. That's what we do."

At a briefing for reporters after the speech, Zurbuchen said he wanted to push NASA to take on risky projects, even if they may not be considered mainstream by the scientific community.

"It's clear that in a traditional type of science environment, talking about some of these issues may be considered a kind of selling out, or kind of talking about things that are not actual science," he said. "I just really vehemently oppose that. I really believe that the quality of science is not only measured by the outputs that come behind it, but also the questions we're willing to tackle with science."

NASA's effort will be led by David Spergel, president of the Simons Foundation in New York City and previously the chair of the astrophysics department at Princeton University, and Daniel Evans, the assistant deputy associate administrator for research at NASA's science mission directorate. The study, to begin in the fall, will last about nine months, cost no more than $100,000 and be independent from efforts by the Pentagon, he said.

"There are potential national security and counterintelligence [impacts], that that's not what we do for a living. And we're not going to get into that at NASA," Zurbuchen said. But the agency does study the atmosphere and aeronautics, he said, and there is a concern that "the airspace is increasingly crowded with many different types of air vehicles."

Spergel said there isn't a working hypothesis going into the study that would explain the UAPs. "I would say the only preconceived notion I have coming into this is that you should be open to the idea that we're looking at several different phenomena," he said. "There's a wide range of what may be accounting for these events."

He added: "This is a phenomenon we don't understand. And we want to collect more data on the phenomenon."

The report released by the director of national intelligence found that "some UAP appeared to remain stationary in winds aloft, move against the wind, maneuver abruptly, or move at considerable speed, without discernible means of propulsion," the report found. "In a small number of cases, military aircraft systems processed radio frequency (RF) energy associated with UAP sightings."

Testifying before the House Intelligence subcommittee on counterterrorism, counterintelligence and counterproliferation last month, Ronald Moultrie, the undersecretary of defense for intelligence and security, said the Pentagon is collecting eyewitness accounts of mysterious flying objects that appear to defy the laws of physics.

"We know that our service members have encountered unidentified aerial phenomena," he told the bipartisan panel. "We are committed to an effort to determine their origins."

In an interview with The Washington Post last year, NASA Administrator Bill Nelson said he had seen the classified UAP report when he was serving in the Senate. "The hair stood up on the back of my neck," he said.

The Washington Post's Shane Harris contributed to this report.