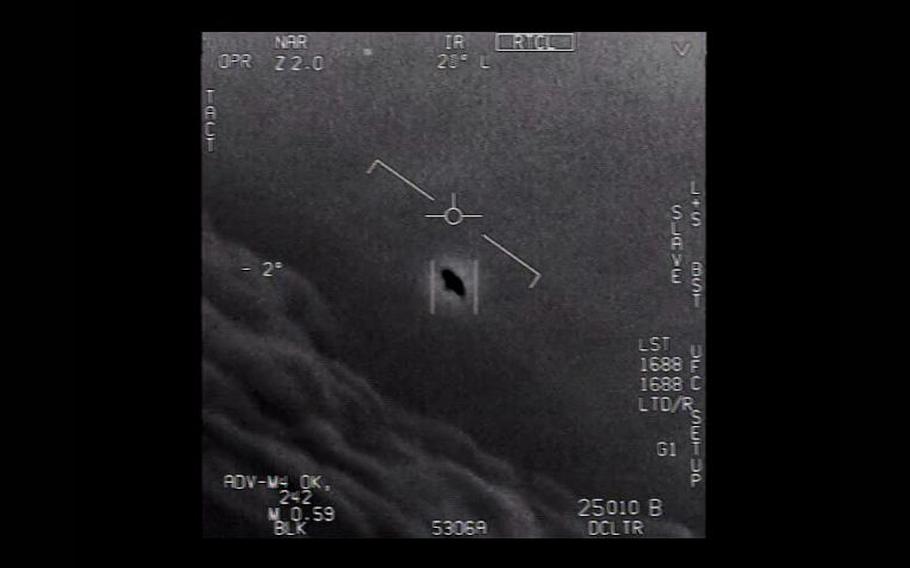 An F/A-18 Super Hornet military jet captured this infrared video from several miles away of an unidentified flying object moving at high speed. The Department of Defense removed the date and location of the footage before releasing it. (Department of Defense)

WASHINGTON — In 2007, Senate Majority Leader Harry Reid called his colleagues Ted Stevens and Daniel Inouye to a specially secured room in the Capitol where highly classified information was discussed.

Stevens, a Republican from Alaska, and Inouye, a Democrat from Hawaii, controlled funding for supersecret Pentagon operations. Reid wanted to put an idea on their radar, one that needed to be kept hush-hush not just for national security but because it was, as Reid's aides told him, kind of crazy.

He wanted the Pentagon to investigate UFOs.

"Everyone told me this would cause me nothing but trouble," said Reid, a Democrat who represented Nevada, home of the military's top-secret Area 51 test site, a central attraction of sorts for UFO hunters. "But I wasn't afraid of it. And I guess time has proven me right."

That's because official Washington is swirling with chatter — among top senators, Pentagon insiders and former CIA directors — about UFOs. What was once a ticket to the political loony bin has leaped off Hollywood screens and out of science-fiction novels and into the national conversation. There are even new government acronyms.

"This used to be a career-ending kind of thing," said John Podesta, who generally kept his interest in UFOs to himself when he was President Bill Clinton's chief of staff. "You didn't want to get caught talking about it, because you'd be accused of walking out of an 'X-Files' episode."

But now there isn't just talk.

Last summer, the Defense Department issued a news release with the following headline: "Establishment of Unidentified Aerial Phenomena Task Force." The mission of the UAPTF, an acronym mouthful, "is to detect, analyze and catalog UAPs that could potentially pose a threat to U.S. national security," according to the Pentagon.

A few months later, as part of President Donald Trump's spending and pandemic relief package, the Senate Intelligence Committee, led by Sen. Mark Warner, D-Va., included a provision calling for the director of national intelligence to help produce an unclassified report on everything government agencies know about UFOs, including scores of unusual sightings reported by military pilots.

That report is due next month.

In the meantime, ex-government officials have been saying remarkable things.

Late last year, former CIA director John Brennan, appearing on a podcast hosted by George Mason University economics professor Tyler Cowen, said it was "a bit presumptuous and arrogant for us to believe that there's no other form of life anywhere in the entire universe."

Last month, former CIA director James Woolsey said in an interview with the Black Vault, a website that collects paranormal sightings, that he was not "as skeptical as I was a few years ago, to put it mildly, but something is going on that is surprising to a series of intelligent aircraft, experienced pilots."

The former CIA directors were referring to Air Force and Navy pilot videos that have surfaced in recent years showing unexplained objects on radar traveling at unusual speeds and performing aerial maneuvers that defy logic when compared with what even the most advanced military planes are known to be capable of.

"Look at that thing!" a pilot screams in one video as his radar homes in on a strange flying object.

"It's rotating," another pilot says.

"My gosh," the other pilot says.

The authenticity of the videos have been confirmed by Pentagon officials. Some of them were recently featured on "60 Minutes."

"I've seen some of those videos from Navy pilots," Brennan said, "and I must tell you that they are quite eyebrow-raising when you look at them." He added, "I think some of the phenomena we're going to be seeing continues to be unexplained and might, in fact, be some type of phenomenon that is the result of something that we don't yet understand and that could involve some type of activity that some might say constitutes a different form of life."

This is not the first time UFOs have appeared on Washington's radar - literally or figuratively.

In 1952, there were reports that "flying saucers" were seen on radar flying around the nation's capital, prompting front-page headlines across the country. "SAUCERS SWARM OVER CAPITAL," a breathless headline in the Cedar Rapids Gazette declared. The Washington Post was a bit more sedate on its front page: " 'Saucer' Outran Jet, Pilot Says; Air Force Puts Lid on Inquiry."

"There was a bright light in the sky," Carter told GQ magazine in 2005. "We all saw it. And then the light, it got closer and closer to us. And then it stopped, I don't know how far away, but it stopped beyond the pine trees. And all of a sudden it changed color to blue, and then it changed to red, then back to white."

Washington's more modern, post-"X-Files" interest seems to have started with Reid's meeting in the Capitol. His own interest in UFOs dates to the mid-1990s, when a TV reporter in Las Vegas invited him to a UFO conference among academics and the UFO-curious.

"I found it really interesting and compelling," said Reid, who has yet to see a UFO for himself.

A decade or so later, Reid was contacted by Robert Bigelow, a wealthy acquaintance in the motel industry whose father died in a plane crash and whose family reportedly blamed UFOs. Bigelow, a UFO enthusiast, owned a ranch in Utah, where there had been a number of paranormal events. Cattle vanished. UFOs were spotted. Strange magnetic fields appeared. A Defense Intelligence Agency official wanted to visit, so he called Reid. His interest persuaded the majority leader that it was time to get serious about UFOs.

It only took about 10 minutes to convince his colleagues, Stevens and Inouye, to support about $22 million for the Pentagon to start a program to investigate. Stevens was a particularly easy sell, Reid recalled, because as an Air Force pilot during World War II he had seen weird stuff, including an object that did not appear to be a plane and that mimicked his movements in the air.

Reid is retired but still talking about UFOs to anyone who asks. The man at the center of Washington chatter on the matter these days is Luis Elizondo, a former military intelligence officer who, according to Reid, ran the Defense Department unit that emerged from the secret meeting held in the Capitol building.

Elizondo recently appeared on "60 Minutes," saying, "I'm not telling you that, that it doesn't sound wacky. What I'm telling you, it's real. The question is, what is it? What are its intentions? What are its capabilities?"

In an interview with The Washington Post, Elizondo explained why the issue in Washington had turned from farce to serious inquiry.

"We are now relying on military and intelligence-collection capabilities to collect the data and then try to interpret the data," he said. "This is not a conversation about how Grandma saw some lights in the backyard and then people wind up scratching their heads wondering what it was."

The country cannot wait any longer to take the matter seriously, he said.

"We're seeing these things on a daily basis," he said. "The longer we keep a lid on it, the more problematic it becomes. It actually works against our interests to keep a cork on this."

But the willingness to publicly discuss UFOs is, for some Washington officials, still complicated. Warner, the head of the Senate Intelligence Committee, declined an interview request.

"We won't have a comment on this," his spokeswoman said.