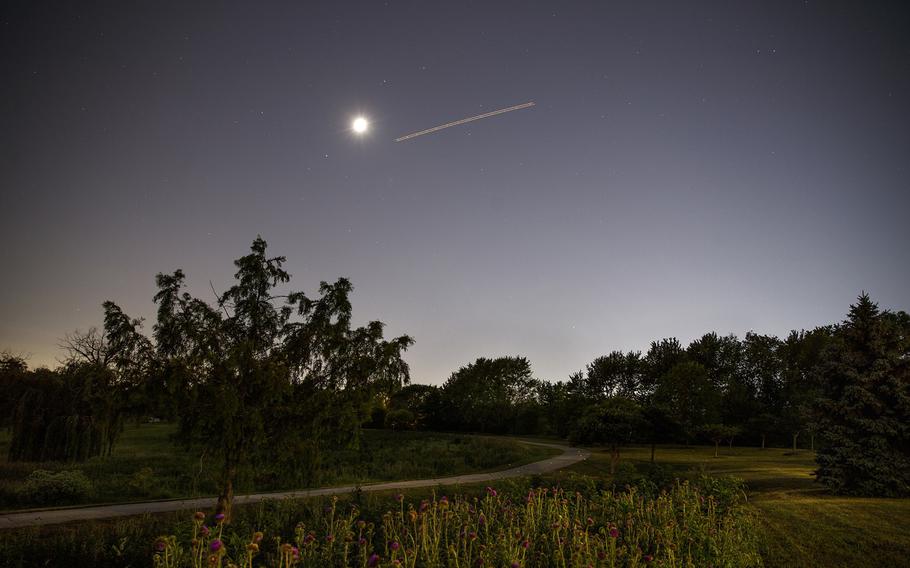 The moon above Centennial Park as an aircraft passes through the area on June 15, 2021, in Tinley Park. (Armando L. Sanchez, The Chicago Tribune/TNS)

CHICAGO (Tribune News Service) — Chicago-area UFO aficionados are buzzing in anticipation of a Pentagon report into strange aerial phenomena, but not T.J. Japcon. He doesn’t need the government to validate what he recorded hovering above Tinley Park almost 17 years ago.

Japcon, who still lives in the southwest suburb, is the foremost chronicler of what has come to be known as the Tinley Park Lights — a trio of color-shifting orbs, seemingly connected, that slid across the horizon before a crowd of witnesses.

Some experts have dismissed the images he captured on videocassette as a prank, but such skepticism is facing new pushback. The military has released videos of flying objects it can’t explain, and the upcoming report, according to journalists who’ve been briefed on its contents, doesn’t rule out extraterrestrial technology.

That makes for heady days for locals who for years have compiled and analyzed UFO sightings, or who have seen odd things themselves.

“A lot of people understand now that we are not alone in this universe,” said Carlos Dominguez, a restaurant manager who runs the UFO Chicago Facebook group and says he has witnessed numerous curious sights, including a strangely bright and fast-traveling light near Midway Airport earlier this month.

“They’re not afraid to say there are UFOs, or even that aliens are living among us. They’re not scared of that subject anymore. (The Pentagon report is) just going to confirm what we already know.” Famous sightings

“My opinion is that out of 10,000 or 20,000 people who see an object they sincerely believe was or may have been a UFO, (researchers) capture only one of those sightings,” he said. “If you want to test my theory, go to a big party sometime and ask everyone who saw a UFO to raise their hands. Then ask how many have reported them. Virtually all of the hands go down.”

There are exceptions, of course. In 2006, a dozen United Airlines workers at O’Hare International Airport reported seeing a large, disc-like object floating over the airport. According to their accounts, it rose after several minutes and punched a perfect circle into the clouds.

“I tend to be scientific by nature, and I don’t understand why aliens would hover over a busy airport,” a United mechanic told the Chicago Tribune. “But I know that what I saw and what a lot of other people saw stood out very clearly, and it definitely was not (a human-built) aircraft.” 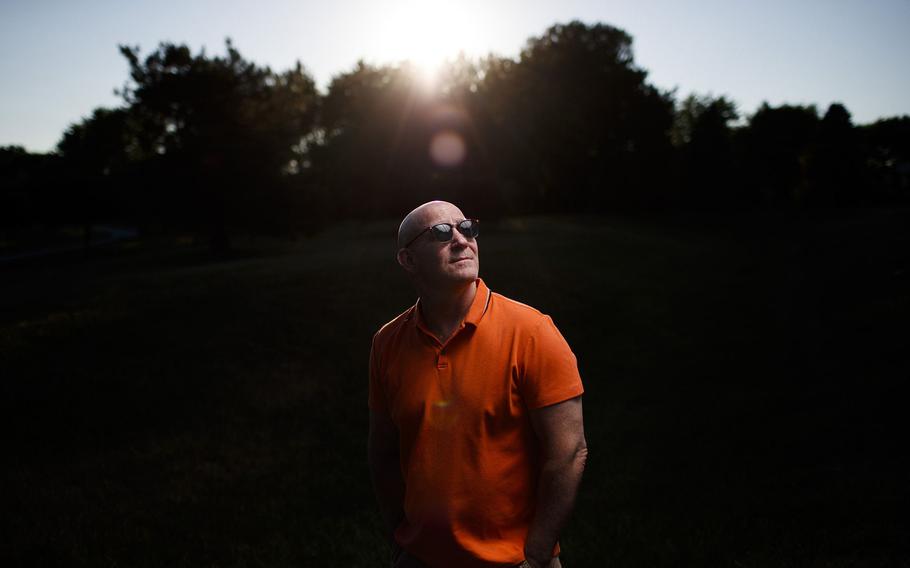 T.J. Japcon near Centennial Park in Tinley Park on June 15, 2021. In 2004, Japcon shot video of three lights hanging above the sky, a phenomenon that came to be known as the Tinley Park Lights. (Armando L. Sanchez, The Chicago Tribune/TNS)

The Federal Aviation Administration said at the time it was a weather-related phenomenon, and that the agency would not investigate further.

Mark Rodeghier, scientific director of the J. Allen Hynek Center for UFO Studies in Chicago, said that was typical of the official incuriosity long expressed by government agencies.

But that started to change in 2017, he said, when The New York Times revealed the existence of an obscure Pentagon program dedicated to studying reports of UFOs. The story came with a video showing an unknown object, captured by the camera of a Navy jet, soaring above the clouds.

“That’s what broke everything open,” Rodeghier said. “That story made it more acceptable for people to talk about it — politicians, scientists and so forth. We’ve seen an uptick in interest since then.”

He added, though, that the vast majority of sightings have non-extraterrestrial explanations, a conclusion echoed by other researchers. The National UFO Reporting Center offers numerous disclaimers among its listings, ranging from stars, planets and satellites to outright hoaxes.

Dave Marler, a researcher and UFO historian who used to head the Illinois chapter of the Mutual UFO Network, said sightings are even harder to substantiate now as digital technology has made deception easy to pull off.

“People take pride in posting fake things,” he said. “All it really does it pollute the field.”

The Tinley Park Lights have so far escaped debunking among ufologists. The phenomenon was the subject of an episode of the History Channel show “UFO Hunters,” which subjected witness footage to video analysis and concluded one popular theory — that the lights came from flares carried by weather balloons — was incorrect.

“Without saying it’s an alien spacecraft, I can definitively say by the strictest definition that it is an unidentified flying object,” said an image processing expert who appeared on the show.

Sam Maranto, who took over from Marler as president of Illinois’ Mutual UFO Network, said evidence of the sighting was bolstered by a cross-section of observers that included police, members of the military and people who worked in aviation.

“It’s about time to realize the phenomenon does exist,” he said.

But Mark Hammergren is far from convinced. The Evanston astronomer and planetary scientist says he, too, looked at the Tinley Park footage, but came away believing the orbs were indeed flares dangling from balloons — the likely work of a prankster.

He is equally unimpressed by the O’Hare sighting, saying the accounts bring to mind a “hole punch cloud,” in which supercooled water suddenly forms ice crystals that fall to earth, leaving behind a disc-shaped empty space in the sky.

Other ballyhooed sightings have similar common sense explanations, he said. The Navy video highlighted by The New York Times, he said, appears to be the infrared glare of a jet’s heat signature.

“My ultimate position is where’s the hard evidence?” he said. “Unfortunately, we live in a day where video evidence usually doesn’t cut it. And even when we have an unimpeachable source like the U.S. Navy, we still have to ask what else could explain those videos.”

The Pentagon report, which is due before Congress by June 25, could clarify matters, but advance accounts say it doesn’t reach definitive conclusions other than the objects were not U.S. technology. There’s no evidence they were extraterrestrial, the report supposedly says, but neither is there evidence they were not.

Rodeghier said given the tight deadline and scant funding the report’s authors were allowed, such ambiguity is to be expected. But he is hopeful it will lead to further government investigation.

“The report absolutely will be another step in the evolution of UFOs becoming a topic that can’t be laughed off,” he said. “That doesn’t mean they’re aliens. It just means we need to study the UFO problem.”

But some longtime buffs are dubious. Carl Jones, who co-administers the Central Illinois UFO Group on Facebook, said people who believe they’ve encountered alien objects are suspicious of the military’s apparent openness.

“In the back of my mind I’m going, ‘Yeah, it’s about damn time,’” he said. “But the thing is, UFOs have been seen and reported for a long time. A lot of people don’t really care if the government admits (the possibility of their existence) because they’ve lost credibility.”

Jack O’Hara, the leader of a Chicago-based Meetup group dedicated to UFOs, goes even further, saying many expect the report to be disinformation. After all, a CIA-formed group known as the Robertson Panel famously suggested in the 1950s that officials should discourage public interest in the subject lest it threaten “the orderly functioning” of the government. But the interest has remained, and O’Hara said no matter what the report contains, he hopes “both academic and personal journeys of discovery” will ensue.

“If we’re right, it is the biggest secret in history,” he said.