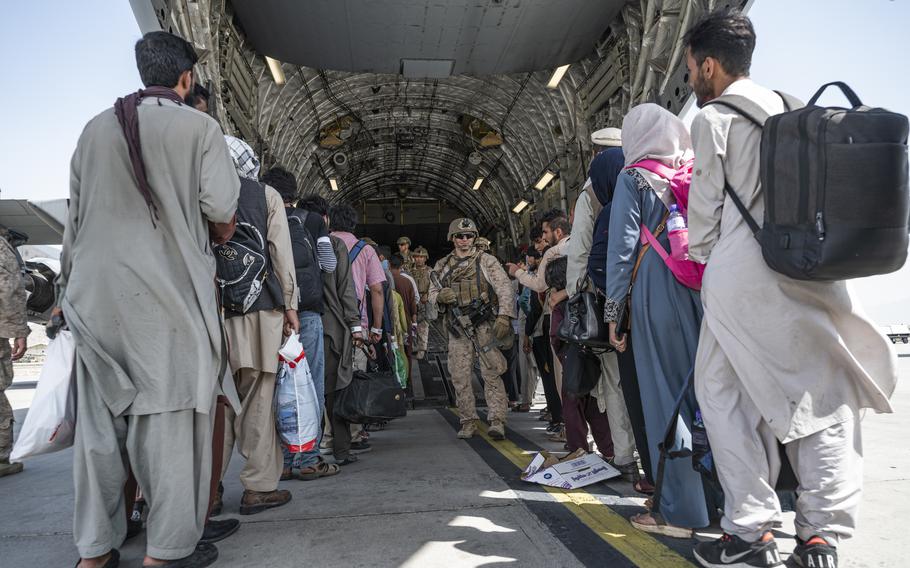 Some of the best-known retired military officers in the United States have joined a grass-roots effort to pass legislation to bolster support for Afghans who assisted the American war effort, calling for Congress to act immediately and include it in a spending bill that lawmakers are expected to approve within days.

"We are convinced that the Afghan Adjustment Act furthers the national security interests of the United States," the officers wrote in a letter to senior lawmakers on Saturday. "It is also a moral imperative."

The letter was addressed to the top Republicans and Democrats in the House and Senate and organized by #AfghanEvac, a coalition of more than 180 nonprofits and other organizations that are supporting Afghan resettlement efforts. The senior officers called for Congress to attach the legislation to the upcoming omnibus, which will provide funding for federal agency budgets through Sept. 30 and also carry several critical pieces of legislation ranging from money to defend Ukraine to changes in presidential election laws.

"If Congress fails to enact the AAA, the United States will be less secure," the officers said in the letter. "As military professionals, it was and remains our duty to prepare for future conflicts. We assure you that in any such conflict, potential allies will remember what happens now with our Afghan allies."

Mullen said in an interview on Sunday that he joined the effort because helping people who assisted the U.S. government resonates with him. Like others, he said, he scrambled to assist Afghans leave the country during the fall of Kabul. He is concerned that if legislation is not approved it would upend life for Afghans who already have been evacuated to the United States but do not have permanent approval to stay.

"To me, it's a sacred commitment that we have, and I don't just mean former military types. I mean the United States of America," Mullen said. "If anything should be above politics, this should be it. We should make sure that we take care of these people."

The missive, first reported by CNN, marks the latest push in a months-long effort to improve how the United States processes the immigration status of Afghans who served in roles such as interpreters for the U.S. government.

The legislation is designed, advocates said, to alleviate bottlenecks that began before the fall of Kabul and grew worse after. It also calls for a streamlining of paperwork for Afghans who already are in the United States without permanent standing and a waiver process for those whose cases may not be easy to resolve. The criteria could assist in cases in which required paperwork went missing before or during the chaotic fall of the Afghan government.

Shawn VanDiver, a Navy veteran who founded #AfghanEvac, said in an interview that he began outreach to put the letter together on Friday, and several military leaders responded almost immediately. The effort follows the compiling of a similar message to Congress by eight retired ambassadors last week.

VanDiver said that McChrystal signed onto the new letter first, and Rep. Peter Meijer (R.-Mich.), an Army veteran, played a key role. There were attempts to get the legislation attached to the National Defense Authorization Act, an annual defense policy bill that recently passed in both chambers of Congress and is awaiting President Biden's signature, but they fell short.

"We think it has to be in the omnibus now," VanDiver said. "These folks [Afghans] don't have time for people in Washington to sit in their policy circles and think about things."

Meijer, who will leave Congress in January after voting to impeach former president Donald Trump and losing in a Republican primary, said Congress will need to start over next year if the Afghan Adjustment Act does not pass now. That will leave many Afghans closing in on the end of a two-year humanitarian parole they were granted to stay in the United States.

The legislation has co-sponsors from both major parties, but some Republicans, including Sen. Charles E. Grassley (Iowa), have said more needs to be done to beef up vetting for Afghans seeking entry into the United States.

Meijer said the legislation has "passionate proponents on both sides of the aisle," but has not been a priority among others. He gave it a 30 percent chance that congressional leaders will allow the legislation to be approved.

"At the end of the day, you're only going to get a couple of priorities into this omnibus," he said. "This is an uphill battle all the way."