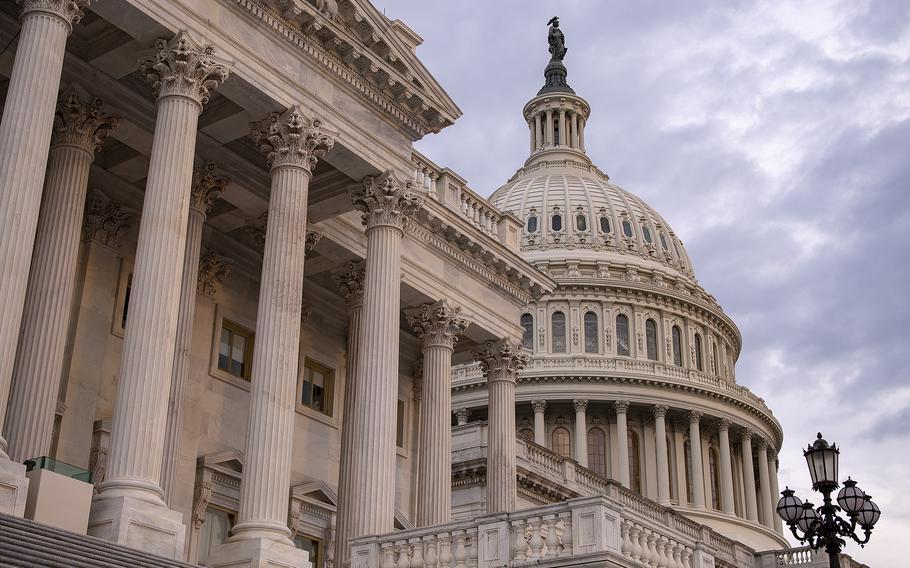 The $847 billion National Defense Authorization Act for the 2023 fiscal year, which began Oct. 1, cleared the upper chamber in a 83-11 vote after winning overwhelming approval in the House last week. The bill, a policy blueprint for the defense budget, now moves to the White House for President Joe Biden’s signature.

“It sends the message to the world that our country is and will remain the global military leader,” said Sen. John Cornyn, R-Texas.

The bill notably rescinds Defense Secretary Lloyd Austin’s August 2021 order requiring troops to be vaccinated against the coronavirus or face dismissal. About 8,200 service members were discharged from the military for refusing to get the vaccine.

A Republican-led amendment that would force the Defense Department to reinstate the dismissed troops with back pay failed to muster enough support in the Senate on Thursday. The measure fell 20 votes short of passage, with Democrats decrying attempts to weaken the authority of a lawful Pentagon directive.

He credited the vaccine mandate for preventing a repeat of the March 2020 outbreak on the aircraft carrier USS Theodore Roosevelt that infected 27% of the crew. Hundreds had to hospitalized and the vessel had to dock in Guam for two months, he said.

"Ninety-eight percent of our troops are vaccinated because they are putting their nation, their fellow soldiers and their families ahead of their personal opinions or personal desire," said Reed, an Army veteran. "That's the function of the military, this unswerving dedication to nation and to following and protecting their fellow personnel."

The defense policy legislation approved Thursday increases spending for the military and other defense programs by $45 billion more than the White House’s budget request, largely to account for inflation. About $817 billion is for the Pentagon and another $30 billion is for nuclear activities in the Energy Department.

Congress still needs to pass a government funding package by the end of next week to allocate money for the priorities outlined in the authorization bill.

Among them is a 4.6% raise for service members and the Defense Department’s civilian workforce that will take effect Jan. 1. The increase is the largest pay hike for troops in 20 years. Maximum special pay and bonuses are set to rise by more than 30% under the bill, which also creates a new special pay for troops stationed in harsh weather locations such as Alaska.

Other provisions for service members include wider eligibility for the military’s Basic Needs Allowance, a new pilot program to reimburse families for child care costs when changing duty locations, extra aid for children with severe disabilities, and more flexibility in housing allowances for high-cost areas.

Reimbursements for military spouses who need to reapply for teaching, nursing and other professional licenses due to a permanent change of station is extended by five years in the bill. Relocation and quarantine costs for pets moving with military families will be reimbursed for the first time.

“When you have an all-volunteer military like ours, supporting military families is an important component,” Cornyn said.

The 4,000-page legislation also makes heavy investments in countering China and Russia, including earmarking $800 million for a program used to purchase weapons for Ukrainian forces battling Russia’s invasion of that country. Nearly $3 billion is set aside to procure new munitions and ramp up production of munitions sent to Ukraine as well as future conflicts.

China -- deemed the greatest threat to the U.S. in the medium and long term -- takes precedence in the bill. It bolsters security assistance to Taiwan, the island that China claims as its own, and infuses funds into partnerships and other operations led by U.S. Indo-Pacific Command, said Senate Minority Leader Mitch McConnell, R-Ky.

Taiwan will receive $2 billion annually through 2027 to train its troops and bolster its defenses. Investments in the Pacific Deterrence Initiative, a fund dedicated to strengthening deterrence in the region, will grow by $11.5 billion.

“[This bill] puts new weight behind long-term commitments to stand with both vulnerable countries in China’s orbit and vulnerable people within its own borders,” McConnell said.

The legislation establishes a new joint force headquarters in the area and bans goods produced by Uyghur slave labor in China’s Xinjiang region from U.S. military commissaries and exchanges. It also prohibits the use of U.S. military assets such as ships or bases in movies that bow to Chinese censorship.

“If Hollywood wants to trample on American principles of free expression to please the Chinese Communist Party, it won’t get to use our armed forces as props in the process,” McConnell said. “China is actively trying to undercut American interests and partnerships — this NDAA will strengthen our hand.”