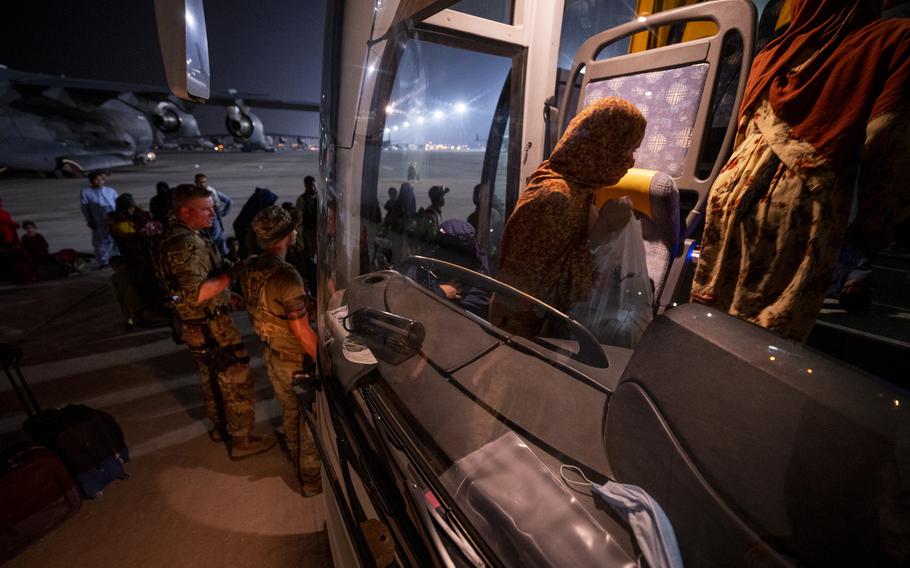 Airmen assist Afghanistan evacuees onto a shuttle, Aug. 23, 2021, at Al Udeid Air Base, Qatar. The Special Immigrant Visa program, which resettles interpreters who worked with U.S. forces in Afghanistan, may be coming to an end after lawmakers stripped provisions for its extension from the national defense bill. (Noah D. Coger/U.S. Air Force)

The end may be coming for a program that resettles Afghan interpreters who worked with U.S. forces during the 20-year-long war, after provisions for its extension were removed from the Senate version of the defense spending bill.

“It’s tremendously disappointing that Republican obstruction prevented Congress from extending authorization of the Afghan SIV program in this bill, which is fundamental to the United States upholding its promise to our Afghan allies,” Sen. Jeanne Shaheen, D-N.H., said Wednesday in an email.

Sen. Charles Grassley in particular has long raised objections over what he has said were lax criteria for SIV program eligibility. The Iowa Republican sought stipulations as far back as 2018 that only Afghans classified as translators or interpreters should be allowed to apply for an SIV.

A spokesman for Grassley declined comment Wednesday but in an interview in August he said other Republicans in the Senate and House also had voiced various concerns.

Grassley as well as a Republican member of the House led efforts to strike the provision from the defense bill, a congressional staffer familiar with the matter but unauthorized to speak on the record told Stars and Stripes.

The SIV program once had some bipartisan support. In May last year, three months before the U.S.-backed government in Kabul fell, a letter from 20 senators that included seven Republicans called for continued support for “the (Biden) administration to uphold the integrity of the program.” 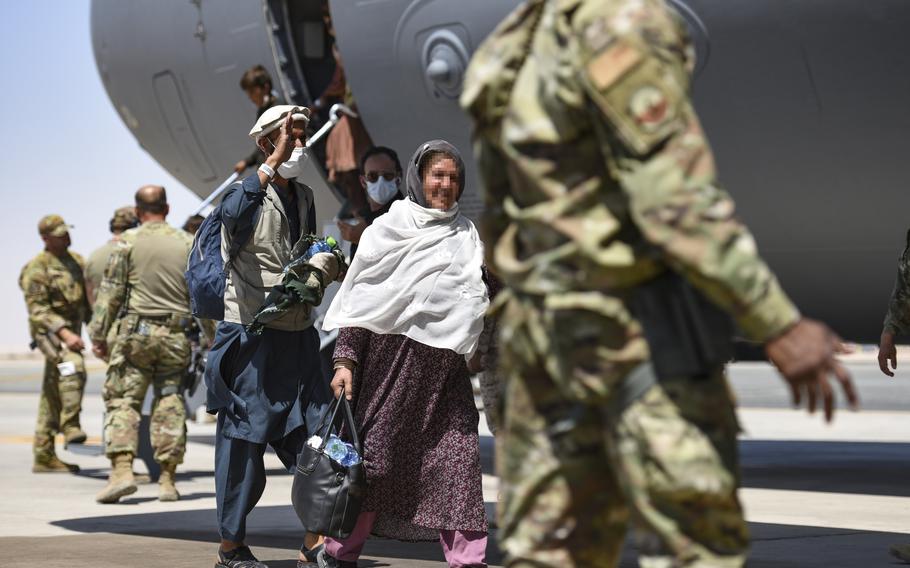 The program, which began in 2009, resettles people and their family members who face risks to their lives because of their previous work with the U.S. government. The SIV program received $1 billion from the Senate in 2021 as part of an emergency spending bill.

Although Iraqis who provided the same service to U.S. troops in their country are also eligible for the visas, Afghans make up the vast majority of applicants.

The State Department’s National Visa Center received more than 530,000 inquiries in the five months after Kabul fell to the Taliban in August 2021.

Advocates for veterans and Afghan translators decried the Senate’s move in comments to Stars and Stripes.

“It would be unconscionable for Congress to allow the Afghan SIV program to expire with tens of thousands of U.S. allies still in harm’s way,” said Adam Bates, policy counsel for the New York-based International Refugee Assistance Project.

Jeff Phaneuf, advocacy chief at the Virginia-based nonprofit No One Left Behind, on Wednesday called it “a betrayal of our promise to those who served alongside American forces during the last 20 years of war.”

Rep. Seth Moulton, D-Mass., a Marine veteran, said in a statement Wednesday that opponents of the visas were driven by “nativist undercurrents.”

“It is beyond me why some of my colleagues who have never even known what it is like to put their lives in the hands of these brave allies in combat would deliberately strip reauthorization for this program,” Moulton said, adding that he still intends to vote for the larger defense bill despite his objection to the revision.

Rep. Jason Crow, D-Colo., said he and some of his colleagues will try to save the program by introducing standalone legislation or attaching the program to the larger omnibus government funding bill.

“I’m going to try to fix it,” Crow, an Army veteran, said in a call Wednesday.

The U.S. welcomed some 74,000 Afghans following the Taliban takeover last year. About half of them are eligible for SIVs or have applied, a senior administration official said in 2022.

Another bill, the Afghan Adjustment Act, which provides permanent legal status to Afghans outside the SIV program or the asylum system, remains under debate in Congress.