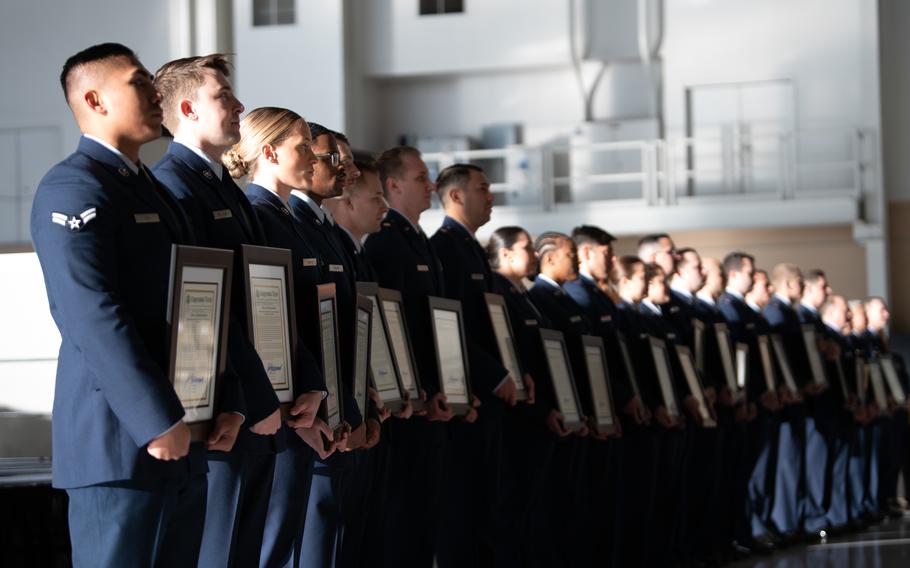 (Tribune News Service) — Few things test one’s skill and courage quite like combat and all came into play in August 2021, when chaos erupted during a massive American evacuation effort from Hamid Karzai International Airport in Kabul.

For their heroism in the face of extreme danger during Operation Allies Refuge, 24 airmen were honored Friday at Travis Air Force Base with a Distinguished Flying Cross. Three more were also designated with the honor, but were unable to attend.

The medal, according to the Air Force, is “awarded to any officer or enlisted person of the armed forces of the United States for heroism or extraordinary achievement while participating in aerial flight. Both heroism and achievement must be entirely distinctive, involving operations that are not routine. This award is not awarded for sustained operational activities and flights.”

The first medal was bestowed on Capt. Charles A. Lindbergh of the Army Corps Reserve was the first-ever recipient in 1927 for his solo, 3,600-mile flight across the Atlantic Ocean. Amelia Earhart was the first civilian to receive the honor.

On Friday, the honorees — members of the Moose 98 and Reach 651 units — were celebrated in a hangar at Travis, complete with a presentation by the Honor Guard, music, prayer and testimony.

In attendance were military brass and personnel, community leaders and an abundance of loved ones, all of whom showered the 24 with cheers and thunderous applause.

By video, Congressman John Garamendi, D-Solano, thanked the men and women for their dedication and sacrifice, their valor and heroism.

“Simply put, Travis Air Base is the very best our nation as to offer,” he said.

Maj. Gen. Corey Martin, commander of the 18th Air Force, spoke of those honored as “receiving a distinction unlike any other they’ve had in their careers.”

Among those he thanked were the families, saying “I cannot imagine what it was like 15 months ago in August when your loved ones were in uniform.”

Though it took this long to receive recognition “in no way diminishes the significance of your actions,” he continued, saying bureaucracy, as it does, got in the way.

To the airmen, he said, “You did it. You were asked to bring your expertise and your grit” to the situation, and they did not disappoint. “You executed in life-sustaining ways. ... The world took notice and thanks you for it.”

Officials explained that the Moose 98 group were headed to Ramstein Air Force Base in Germany from Kabul during a particularly hostile time. Thirteen people were killed and numerous people were injured. Low on fuel needed to complete the mission and with no lights to guide the plane’s way, among other challenges, pilots landed using night vision goggles.

The crew sprung into action, their preparations allowing for a departure more than an hour ahead of schedule and allowed for a maximum number of passengers despite space limitations.

There were critically-injured patients, including youths, that added to the stress, it was said, but the team got the job done. Eventually they linked with a refueling tanker over the Black Sea and got the necessary fuel to continue on to Germany.

The crew, which handled more than 450 evacuees, were also subjected to two Afghan men who attempted to gain the flight desk. They were stopped and the cockpit guarded, officials said.

As well, a critically-ill passenger caused the declaration of an emergency situation. An unplanned landing was called for, saving the woman’s life.

Col. Derek Salmi, commander of the 60th Air Mobility Wing, praised the airmen for their commitment and sacrifice, “for emulating the Airman’s Creed in your acts. We are grateful for your courage and inspired by your example.” (c)2022 The Reporter, Vacaville, Calif. Visit The Reporter, Vacaville, Calif. at https://www.thereporter.com/ Distributed by Tribune Content Agency, LLC.