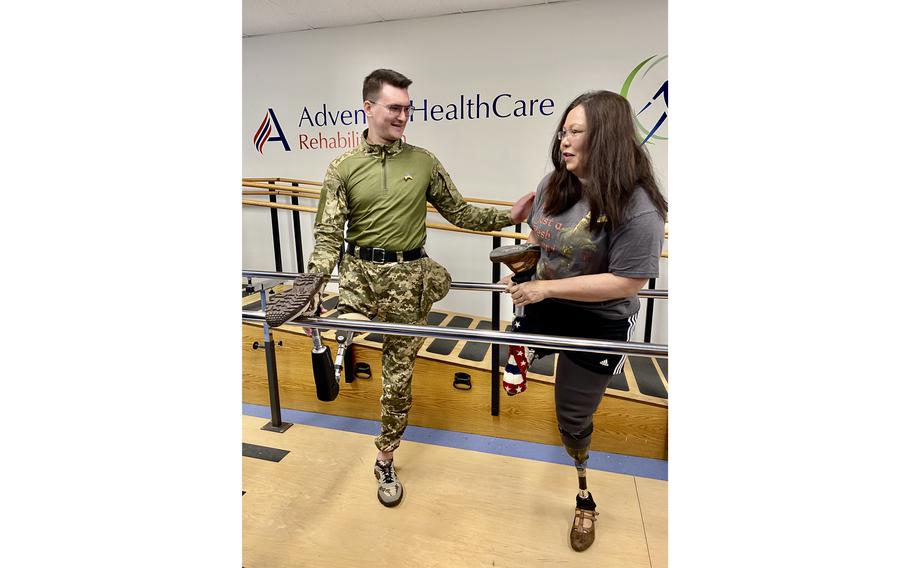 Oleksandr Chaika, a Ukrainian soldier who lost his leg in battle in April, met with Sen. Tammy Duckworth, D-Ill., on Tuesday after receiving the first prosthetic supplied by Operation Renew Prosthetics. (Svetlana Shkolnikova/Stars and Stripes)

Ukrainian fighter Oleksandr Chaika remembers the moment that he lost his leg with vivid clarity.

He was in a trench near Popasna, a city in the eastern Luhansk region of Ukraine, in early April when a tank shell launched by invading Russian forces threw him in the air.

Chaika landed numb, covered in mounds of dirt and iron beams, and he wondered whether his future hopes and dreams had been extinguished.

“Is this really it?” he said he thought as his comrades frantically dug him out. “I had so many plans. I wanted kids. I wanted to open my own dance school. Is this all really going to fall apart?”

Chaika’s plans did not die that day. But they dimmed as severe wounds and a gangrene infection resulted in the full amputation of his right leg. Chaika spent three months in a military hospital in Dnipro, defying doctors who predicted a slim chance for him to recover.

In July, his dreams stirred to life again as he married his wife, Anna. They grew even brighter last week, when he was fitted with his first leg prosthetic at the Medical Center Orthotics and Prosthetics in Maryland. For the first time in six months, Chaika stood tall and walked again.

“This has changed my life,” he said Tuesday as he greeted Sens Tammy Duckworth, D-Ill., and Chris Van Hollen, D-Md., at the clinic in Silver Spring.

Chaika, 33, is the first Ukrainian veteran to benefit from Operation Renew Prosthetics, a new program launched by the Brother’s Brother Foundation in partnership with the Future for Ukraine Foundation to treat Ukrainian military amputees abroad. Oleksandr Chaika, a Ukrainian soldier who lost his leg in battle in April, met with Sen. Tammy Duckworth, D-Ill., on Tuesday after receiving the first prosthetic supplied by Operation Renew Prosthetics. (Svetlana Shkolnikova/Stars and Stripes)

Medical Center Orthotics and Prosthetics will provide therapy and rehabilitation for Chaika for six weeks before taking in five more Ukrainian fighters with complex amputations Ukraine is not equipped to handle.

“They can treat below-the-knee amputations all day every day, but when you start getting into bilateral, hip disarticulation … it’s not that they don’t want to, they just don’t know how,” said Mike Corcoran, the clinic’s co-founder and CEO.

Corcoran is handling Chaika’s case, using expertise that he developed treating similar injuries among U.S. veterans from the Afghanistan and Iraq wars at the Walter Reed National Military Medical Center in Bethesda, Md.

“Alex is a Ukrainian version of an American warfighter,” Corcoran said, using the short version of Chaika’s name.

Duckworth, an Army veteran who lost both legs in Iraq during a grenade attack on her helicopter in 2004, bonded with Chaika on Tuesday as the two compared their experiences and prosthetics.

“We can both go to the bar together and you can put your cup here,” Duckworth said, twisting her prosthetic up to bring the sole of her shoe level with her chest. She wore a Monty Python T-shirt with the words “It’s just a flesh wound” on it.

Chaika is the first amputee with whom Duckworth has met from the war in Ukraine but she said she anticipates more visits as soldiers maimed in Russia’s ongoing assault on its neighbor come to the U.S. for treatment.

“This connection is really important for a new amputee — to see someone further along in recovery, to know what’s possible,” Duckworth said. “When you first wake up and you’ve lost a limb or two or three, you think there’s no future for me. And then you see someone walk into the room who has not only survived but is also learning to live with that difference, that disability and thriving and doing other things. Your mind switches from ‘I can’t do this anymore, I can’t do that anymore’ to ‘I can do this.’”

Chaika told Duckworth that he hoped to teach dance to children again. Duckworth told him to aim even higher: “Maybe you’ll dance again.”

Before the war, Chaika worked as an acrobatics coach in Kyiv, Ukraine’s capital. He joined the Ukrainian army in March, like thousands of his fellow countrymen to protect his homeland against a Russian military invasion launched in late February.

“I didn’t even think about it,” Chaika said. “I knew I needed to defend my country.”

He wasn’t scared, he just hoped for the best, he said. His wife Anna said there was no time to think about anything else.

Chaika served in the 24th Separate Mechanized Brigade for about a month before becoming gravely injured. He underwent two operations, spent two weeks on a ventilator and had kidney dialysis in recovery. Today, he has phantom pains and feels his leg burning when the weather changes.

The prosthetic leg is a bit uncomfortable but Chaika said he’s getting used to it and already sees the world opening up to him once more.

“This prosthetic gives me a future,” he said. “I hope to return to a normal life.”

He and his wife will return next month to Kyiv, where he hopes to help other amputees “stand up and be strong.”

Chaika’s background in dance and sport will aid him greatly in recovery, Corcoran said. His clinic has committed about $500,000 to treat Ukrainian soldiers in the next few months.

Prosthetic companies are now providing equipment to Operation Renew Prosthetics for free but the program will need significant donations to sustain itself in the long term, said Bill Endicott, a volunteer coordinator for the program and a Marine Corps Reserve veteran. The cheapest prosthetics can cost $3,000 while an extensive prosthetic such as Chaika’s has a price tag of about $100,000, he said.

Some of the soldiers following Chaika to the Silver Spring clinic are double and triple amputees, said Svetlana Faktorovich, a Brother’s Brother Foundation board member.

“Our goal is to take the most complicated, the ones that are having a hard time getting proper care in Ukraine,” she said.

Chaika was upbeat Tuesday about his recovery but Corcoran cautioned that physical healing is only half the battle. Once the war ends, Chaika and other Ukrainian amputees will have a constant reminder of what happened to them, he said.

“I try to say to him that the intent of that tank shell was to kill him, so he’s a survivor,” Corcoran said. “You’ve got to do the glass half full, not half empty.”

Donations to the Operation Renew Prosthetics can be made through the Brother’s Brother Foundation.