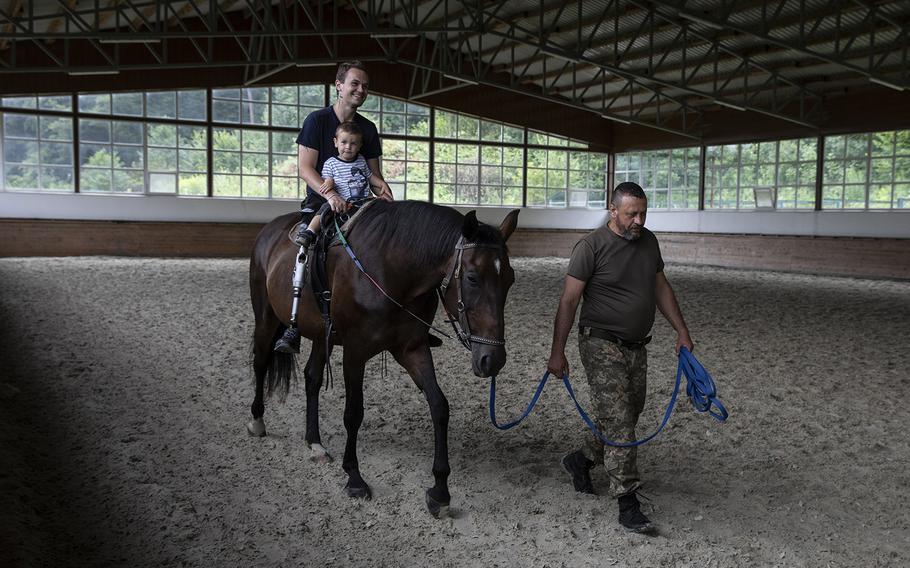 Vasyl Irkha leads Serheii, 26, during a therapeutic horseback riding lesson as Egor, 2, shares the saddle with his father on July 31, 2022. (Heidi Levine for The Washington Post)

SUKHODIL, Ukraine - Danylo Ischenko dreams of walking beside his fiancée on their wedding day.

Bolivia, an English racehorse, is helping him get there.

Ischenko, 34, lost his leg to shrapnel from Russian shelling in a village near Kharkiv in northeastern Ukraine that changed his life in a fiery flash. The shards sliced into his left leg, which he lost 11 days later. The military sent Ischenko to a rehabilitation center in Lviv, in western Ukraine.

He was referred to a horse farm, where he met Bolivia.

"She's really calm and sweet," Ischenko said of the dark, chocolate brown horse with a thick, black mane. "I found my connection with her."

Ischenko is among Ukraine's wounded undergoing hippotherapy - physical therapy based in riding horses. The soldier is part of the country's growing legion of amputees, both civilians and fighters, recovering from wounds seen and hidden.

On a Sunday in July, Ischenko rode Bolivia around an arena with the assistance of a trainer. The two appeared to move as one, Bolivia responding to his signals.

After five sessions, "my mental state is getting better," Ischenko said. "I feel how the muscles on my legs and back are getting stronger. I like that feeling."

"My nervous system is calming down," he said. "I no longer have nightmares."

Ischenko's path to recovery remains arduous. He hopes to travel to the United States in September for a bionic leg, an electromechanical artificial limb, but he still needs the visa. After that, he said, he'll be ready to walk into marriage. Anatoly nestles a horse during a hippotherapy session at a farm in Sukhodil, Ukraine. (Heidi Levine for The Washington Post) 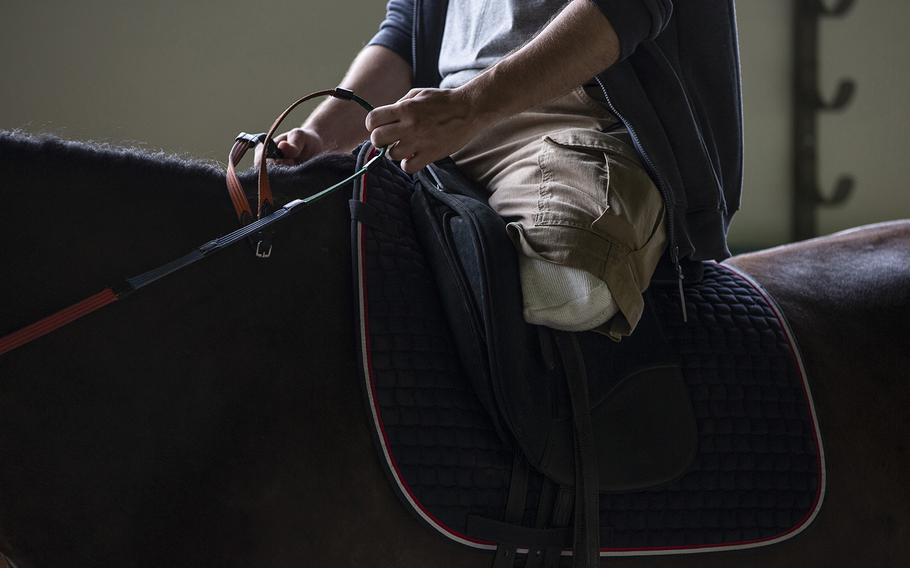 Horse therapy brought together husband and wife Vasyl Irkha, 50, and Oleksandra Khandodina, 42, who run the farm in the village of Sukhodil, near Lviv. Before Russia's invasion, the duo had a farm in Poltava, central Ukraine, and worked primarily with sufferers of post-traumatic stress, often children.

Now they specialize in treating Ukraine's growing ranks of soldiers with amputated limbs, through a project called Ride to the Future. There are no official figures for how many soldiers have lost limbs in the war: As a rule, Ukraine's military does not disclose causality counts.

Through testing themselves and connecting with animals, he said, participants work to heal psychological traumas and learn to take pride in their resilience.

"We show them the possibility," he said, "that they may have lost a limb, but life goes on."

Irkha knows from experience. He fought for three years in eastern Ukraine after Russia's 2014 invasion. He returned with back pain, heart problems and a post-traumatic stress disorder. He needed an anchor.

An acquaintance asked him to help out with a program at a nearby horse farm, where he was introduced to hippotherapy - as well as to Khandodina, who also worked there. The now-married couple moved west when this year's invasion began. They started tailoring treatments to amputees.

Every case is different.

Anatoly, 26, who for privacy reasons gave only his first name, lost his right arm from an injury sustained in close combat in Mariupol in April, he said. He had to walk eight days with a tourniquet around his arm before reaching help. He knew after the first day he had lost his arm. 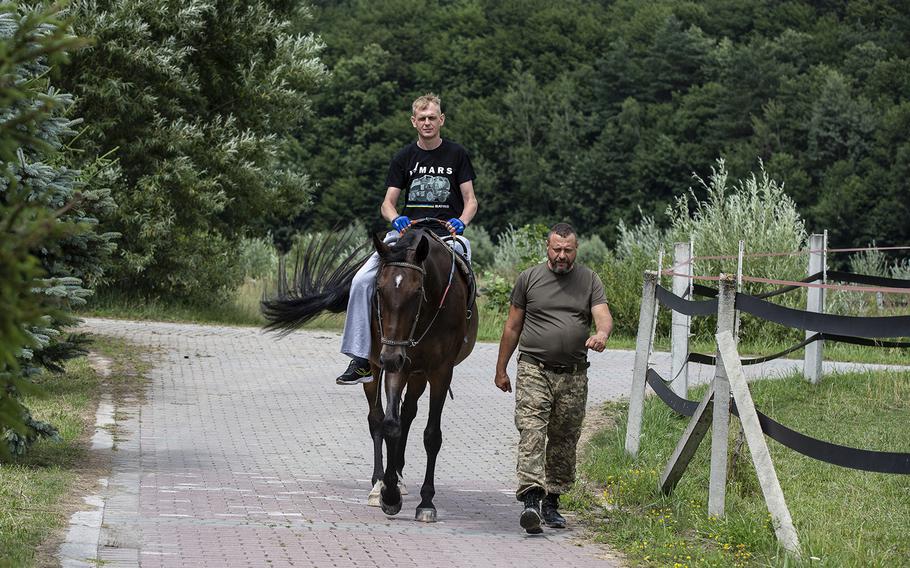 At the horse farm, he is tending to lingering pain, compounded by phantom pain, perceived discomfort in a limb he no longer has.

He first learned to hoist himself up by throwing his chest over the horse's side, before moving on to one-handed yoga moves. The greatest feeling, he said, is "the emotion of victory, over myself, that I did something."

Serheii, 26, who also gave only his first name, said he didn't care for horses - and came instead for his wife, seven months pregnant, and 2-year-old son, Egor.

The toddler screeched in excitement at the sight of them.

Serheii was injured in March in a village near Izyum, now Russian-occupied.

"The missile burrowed into the dirt, exploded and, with the fragments and the shock wave, [the leg] flew off immediately," he said. "I flew up, caught fire, fell down. And my leg fell next to me."

Egor does not know that anything about his father is different. The child sometimes bumps into or bites the prosthetic limb - as he does everything around him, Serheii said.

One day, though, Egor will learn what happened.

In the meantime, the child watched his father used a stool to mount a horse, as Irkha held the slack in the lead rope. The horse began to amble.

Egor ran behind, screeching in desire to remain with his father. So Irkha hoisted him up in front of his father, where he sat happily.

The extra weight made the drill harder. But the soldier appeared calm, as did the horse bearing him and his son.