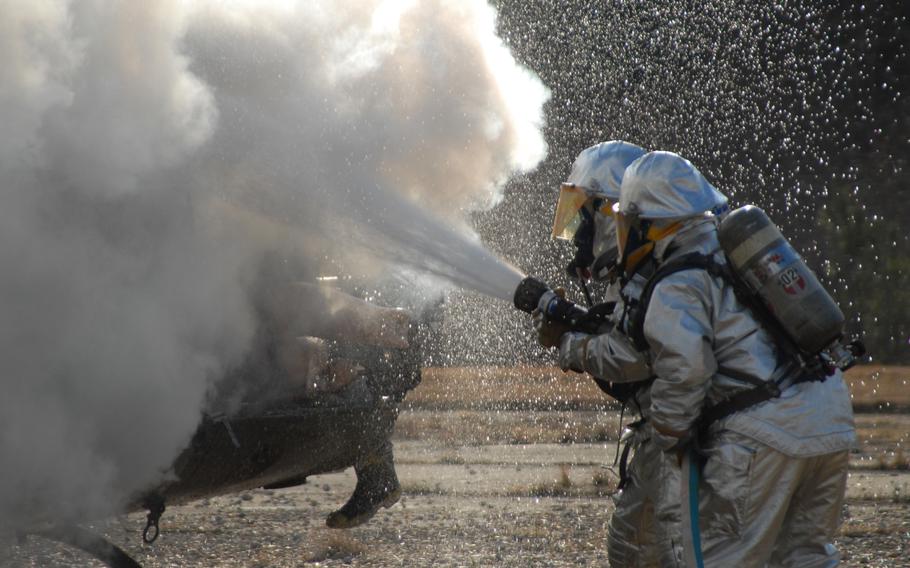 (Tribune News Service) — Manmade chemicals brought to the marketplace last century after World War II to make life better with products such as nonstick cookware and water-repellent shoes have made life in this century more worrisome.

The Security-Widefield area of El Paso County, Colo., in 2016 became ground zero for drinking-water contamination of per- and polyfluoroalkyl substances, a group of compounds referred to as PFAS.

Routine testing identified PFAS in wells downstream from Peterson Space Force Base, one of several sites around the nation polluted by firefighting foam.

"It's almost ironic now that we're in good shape and with new EPA health advisories, it's going to be another round of public concern that we've already dealt with," he said.

A peer-reviewed study conducted by scientists at the Environmental Working Group, a nonprofit activist organization, published in October 2020, estimated that more than 200 million Americans could have excess PFAS in their drinking water.

Colorado is one of several states that's come under scrutiny in recent years for high concentrations of the chemicals.

A report released in June identified more than 200 state water providers that tested in 2020 above what the EPA defines as potentially hazardous PFAS levels and recommended they notify consumers. Researchers anticipate that other water sources in the state are tainted, as well, but have yet to be tested.

The EPA in June also issued more stringent health advisories for two PFAS, which are currently unregulated, though the agency has said it is developing enforceable regulations.

From legislation Colorado lawmakers passed in 2020, the Colorado Department of Public Health and Environment this year is providing $1.5 million in grant funding for eligible entities to sample water, provide emergency assistance, and help treat contamination.

'Live with the small amounts'

Because PFAS don't degrade, they are called "forever chemicals."

They bind to fat in the body, aren't expelled in urine, and accumulate over time, said Scott Wilson, president and CEO of Regenesis. His company, based in San Clemente, Calif., has created a mitigation system that doesn't require water to be pumped to the surface to be treated but uses a subsurface method that essentially converts the aquifer itself into a purifying filter.

"If you drink a water source all your life, even small amounts will build up to the point it starts to do bad things to your body," Wilson said.

Exposure has been linked to several types of cancers, developmental problems among children, immune system deficiencies, diseases of the thyroid, kidney and liver, and other health problems, according to the Centers for Disease Control and Prevention.

But there's little remediation happening at this point, Wilson said.

"There's no federal standard, so federal facilities like FAA-controlled airports and military bases don't feel like they have to clean up," he said.

But lawsuits around the nation are mounting: Wisconsin's governor and attorney general filed suit in July against three manufacturers and other defendants for PFAS contamination of drinking water, property and natural resources.

The EPA earlier this year said it plans in 2023 to enact federal standards for maximum concentrates of PFAS in drinking water under the Safe Drinking Water Act, which Wilson said will likely lead to required remediation.

"The question is can we get rid of all this; the answer is we can't," Wilson said, "but let's live with the small amounts we can live with and remediate the sources causing the problem so they don't spread more."

Fountain Valley wells were shut down six years ago, after the toxic firefighting foam used in training at nearby Peterson Space Force Base leached into the Widefield aquifer at elevated amounts. Water districts such as Security's turned to other contracted sources to provide Arkansas River water from Pueblo Reservoir, through the Southern Delivery System, a regional water delivery system.

The area's drinking water has been deemed safe, said Heald of Security Water and Sanitation.

All tap-water samples collected in Security and Widefield during an exposure assessment in 2019 and 2020 met EPA guidelines, according to a report the Agency for Toxic Substances and Disease Registry and the Centers for Disease Control and Prevention released in June.

The report did show elevated blood levels of two types of PFAS in a sampling of 318 adults and 28 children living in Security and Widefield who had possibly ingested foul water.

While federal authorities said the levels might be linked to past drinking-water contamination, they advised residents against sourcing their water elsewhere because the water is currently testing as safe.

The exposure assessment for El Paso County did not look at connections to health problems but determined that adults who consumed locally grown fruits or vegetables had 52% higher levels of one of the PFAS compounds.

The Agency for Toxic Substances and Disease Registry held public sessions for residents in June and July, with 68 people seeking information online and in person, according to a spokeswoman.

More testing is underway, through the Colorado Study on Community Outcomes from PFAS Exposure. Participants can sign up at www.co-scope.org.

The goal: Sample the blood and urine from 1,000 Fountain Valley residents to "provide a better scientific understanding about the relationships between PFAS exposure and certain health outcomes and help people understand their risk for health effects," the spokeswoman said.

PFAS not going away

Following lawsuits that began in 1999 against DuPont, a chemicals company, the EPA passed a rule in 2012 to monitor for PFAS in drinking water.

Residents in the mobile-home park were given free bottled water to drink for more than a year, from the summer of 2016 until November 2017, when an Air Force-funded treatment system was installed.

Timothy Ahner moved to the park in 2017 and said he feels fortunate to have become a resident after the contamination was identified.

Drinking bottled water wasn't bad, Ahner said, since there was no cost to residents.

The treated water tasted "nasty" at first, he said, but has since improved.

"I was happy with the way things were handled, with the filtration system," Ahner said.

Park manager Casey Kuhn said the water is tested frequently and extensively, by himself and Air Force personnel.

"It always comes back good," he said.

PFAS aren't going away, said Ann Brechtel, a mother of small children whose family has lived in the Fountain Valley for a decade.

That's why she continues to filter drinking water in her kitchen.

Brechtel rents several plots at Duckwood Community Gardens at Fountain Creek Regional Park, because she said it's cheaper than using water at home. And she's not worried about the quality of the water there.

"Some people nowadays don't even know about it (the contamination)," Brechtel said. "It's not something a realtor will tell you when you buy a house here."

The situation continues to affect some neighbors, though.

Venetucci Farm in Security hasn't been able to plant vegetables or other edibles in the ground since it shut down operations in 2016, said manager Nikki McComsey. The groundwater that was used for crop irrigation at the educational, nonprofit farm has still not been cleared for consumption, she said.

The urban farm, known for decades for opening its giant pumpkin patch free to school children every fall, now grows flowers under McComsey's business, Gather Mountain Blooms, and also has become a venue for weddings, meetings and events.

"It's obviously had a big impact on the farm," McComsey said of the infiltration of PFAS.

"The great thing is we've been able to find a way to still grow crops and still use it for agricultural purposes — it's just a different way of doing things to bring people back to the farm."

Seafoam-green, sky-blue and dark-blue pipes in the new Security mitigation plant carry raw water from 24 area wells that has been brought to the surface for remediation. The cleansed water is then delivered to 19,500 people.

An ion-exchange process, pioneered by Brandon Bernard, manager of water and wastewater operations for Security Water and Sanitation Districts, employs resin as the agent that helps reduce PFAS compounds in raw water, instead of the traditional activated carbon.

"No one in North America was doing ion exchange," he said, citing its superiority in containing PFAS breakthroughs longer and ease of use because it does not require other substances, such as nitrate, to be sloughed off.

Widefield's new mitigation plant went live in May 2016, also using resin as the primary material; a new Fountain facility is still under construction and expected to open soon. The cost to the Air Force to build all three facilities is about $41 million, according to the Air Force Civil Engineer Center.

The Security plant was completed one year ago and operated on a limited basis until glitches were worked out, Heald said. It became fully operational in May.

So far, so good, Bernard said.

"You're talking about measuring down to parts per trillion, which is about a minute and a half every 32 years," he said.

Current sample show no detection of PFAS, Bernard said, and he doesn't expect that to change anytime soon.

The state-of-the-art plant is running at about 30% capacity, Heald said, outputting about 2,500 gallons a month, with a capacity of 6,800 gallons.

Water use has declined statewide for 20 years, he said, in part due to more water-efficient landscaping and fixtures. Heald doesn't attribute the contamination as a contributing factor.

Some residents say they continue to drink bottled water.

"The water doesn't taste bad, but with all that's happened, I don't trust it for drinking," said Sharon, who's lived in Security for 34 years and asked that her last name not be used.

"I know a lot of people who have gotten sick, but from what is the question."

When her daughter was in high school decades ago, "quite a few" students developed colitis, a stomach condition, Sharon said, including her daughter.

"We all wondered what that was about," she said.

Magee, a Colorado Springs native whose family has lived in Security for five years, thinks his family has gotten sick "way too regularly," but he's not sure if the water has had anything to do with it.

The erosion of consumers' faith in their municipal drinking water has been one of the most disappointing outcomes of the whole situation, the Security water district's manager Heald said.

"Customer confidence in the quality of water we provide to people is something we're very proud of," he said. "That's what we do."

And, he added, "We don't have any concerns about meeting the new EPA health advisories to provide safe drinking water."