US troops to train Ukrainian forces on howitzers in coming days 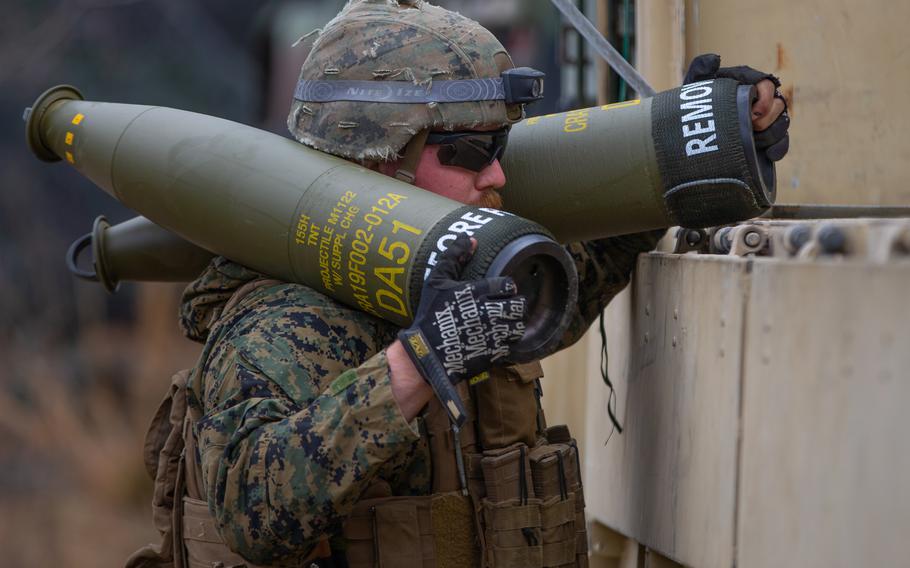 WASHINGTON — American troops will train Ukrainian forces in the coming days on how to operate U.S. howitzers as the Pentagon sends them 18 of the cannons as part of the latest $800 million in military aid, a senior U.S. defense official said Monday.

The training, which will occur outside Ukraine, will teach Ukrainian forces to operate the 155mm howitzers. They will then return to the fight and train other Ukrainians to use the American cannons, the official said. The aid package includes 40,000 artillery rounds.

“We have made some progress in terms of setting up some training for Ukrainians,” the official told reporters at the Pentagon. “These are train-the-trainer [sessions], so training trainers outside of Ukraine in coming days on the howitzers, specifically.”

The U.S. does not expect it to take long to complete the instruction, Chief Pentagon spokesman John Kirby said Friday.

“It's not going to be exorbitant. It won't take a long time. It won't require a large pool of trainees,” he said. “We don't believe that it's going to be an onerous task, or lengthy in time or in resources.”

Ukraine already uses howitzers, such as the Soviet-era 152mm mSATA-B and 122mm D-30, but their troops will still need instruction on the American cannon, whose “basic outlines” are “not unlike other artillery,” Kirby said Monday.

“This particular system is new to the Ukrainians … [but] they understand how to use artillery and we don’t believe it will take very long or require much detailed training to get them up to speed on American howitzers,” Kirby told reporters at the Pentagon.

Defense officials have not said which of two U.S. howitzer models — the older M198 system or its replacement, the M777 — is being used by the Ukrainians. With respective ranges of 14 and 18 miles, according to the Army Acquisition Support Center, they are most comparable to the Msta-B, which can fire artillery as far as 15 miles away.

The howitzers announced Wednesday in the latest $800 million military aid package are the first the U.S. has sent Ukraine since Russia invaded the country on Feb. 24. Other countries, such as Estonia, have also recently sent howitzers to Ukraine.

The U.S. is sending the cannons as Russia prepares to launch a renewed assault on the Donbas region in eastern Ukraine. The land there is flat, rolling plains and conducive to using long-range fires, Kirby said.

"The terrain lends itself to the use of artillery, and we know that the Russians also believe the same thing because we're seeing them move artillery units into the Donbas, as well," he said. "So, we want to give the Ukrainians every bit of advantage that we can. They specifically asked for artillery support."

The U.S. on Sunday sent the first four planes carrying military equipment from the most recent security assistance package and plans to make another delivery within the next 24 hours, said the official who spoke on condition of anonymity.

The official did not detail what kinds of equipment were delivered in those flights. Aside from the howitzers, the package also includes 300 Switchblade tactical drones, 11 Mi-17 helicopters, 200 M113 armored personnel carriers and other weapons and military equipment, according to the Pentagon.

The defense official did not say where the training would take place but said U.S. European Command is working on it. There are more than 100,000 U.S. troops in Europe, roughly 15,000 of whom are deployed to NATO countries that border Ukraine, such as Poland, Hungary, Romania and Slovakia.

Most of that 15,000 — about 8,750 — are in Poland, where U.S. troops have previously advised Ukrainians on U.S.-donated systems, such as Javelin missiles, as they transferred the weapons to Ukrainian hands, defense officials said last month.

“There's some liaising going on, but we wouldn't call it classic training,” a senior U.S. defense official said of the prior advising March 31.

The U.S. also recently trained Ukrainian troops in the United States on Switchblade drones. Those troops, who were already in the U.S. for military education prior to the start of the war, have since returned to Ukraine to share the Switchblade training with other troops.

U.S. troops might be called upon in the future to train Ukrainians on other weapons in the $800 million package, the official said.

"We're exploring other options for other systems as well, and even if there needs to be additional training for the howitzers, we're certainly looking at that, as well,” the official said. “There’s a range of options that are still being explored."