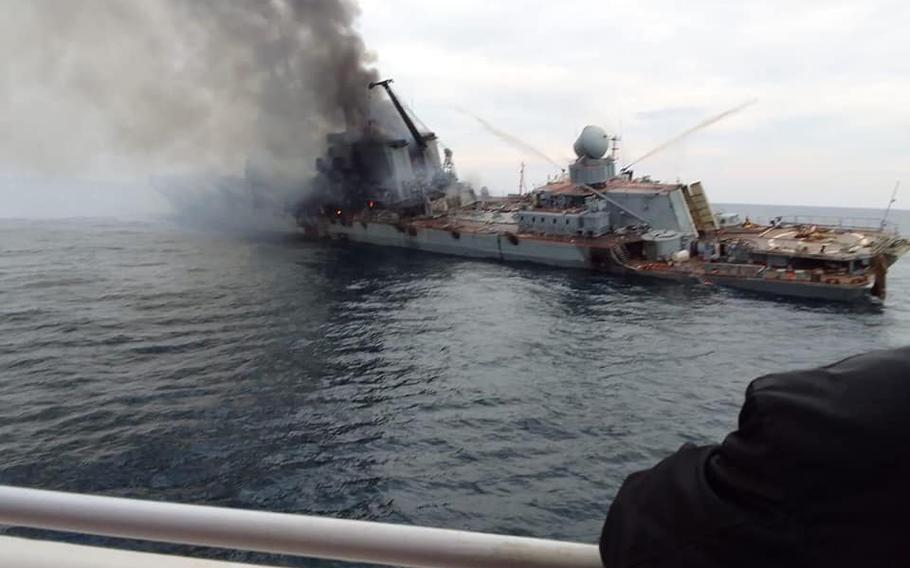 Images posted to social media April 18, 2022, appear to show the Russian missile cruiser Moskva damaged, on fire and leaning after taking on water. Stars and Stripes was unable to independently verify the origin of the images early Monday, but a range of military experts said the pictures appear legitimate. (@ua_industrial/Twitter)

The widely shared but unsourced photos appear to be authentic, analysts said. They show the Russian Black Sea Fleet flagship listing to port, or the left side, with fire and smoke coming from the structure.

The photos and a video appear to have been taken from a Russian rescue tugboat after a fire started on the Moskva and its crew abandoned the ship, said H.I. Sutton, a military expert and open source intelligence analyst. Istanbul-based ship watcher Yoruk Isik identified the tugboat as part of the Russian Black Sea Fleet’s 145th Rescue Ship Squadron, 1st Group, Sutton said.

“The damage does not rule out a missile strike(s), and it remains the likely cause,” Sutton said in a Monday post to his blog and promoted on his Twitter account @CovertShores. “Possible puncture marks in the side of the hull are visible where the fire is.”

More analysis would be needed to confirm if the marks were caused by a missile strike, Sutton said.

Maksym Marchenko, governor of the Odesa region of Ukraine, said that two Ukrainian missiles caused the fire and explosion. That claim was denied by Russian officials who said the origin of the fire was “localized” and was being investigated.

On Thursday, the Russian Defense Ministry said the Moskva sunk while being towed to port in Crimea. Pentagon officials on Friday said that a missile strike caused the blast.

In analyzing the photos, Sutton said the lack of life boats on the ship indicated the crew already had left. The photos also could have been taken before a catastrophic explosion seriously damaged the Moskva, he theorized.

The fire appeared to be in the middle of the ship in the funnels, behind “the main P-1000 Vulkan (SS-N-12 SANDBOX) anti-ship missiles and ahead of the S-300F Rif (SA-N-6 GRUMBLE) air-defense missiles,” Sutton said.

The area also was near the Moskva’s engines, he said.

“We cannot be sure at this point, but possibly there was a catastrophic explosion of either the anti-ship or air-defense missiles. Or possibly other systems,” Sutton said.

Video posted on Twitter by military expert Rob Lee shows dark, black smoke billowing from the Moskva with another ship nearby.

“Looks like a legit photo of the Moskva after it was struck by Ukrainian Neptune anti-ship missiles,” Lee tweeted in a separate post on Monday.

Looks like a legit photo of the Moskva after it was struck by Ukrainian Neptun anti-ship missiles. https://t.co/oVYDySpcd8

Loss of the 11,490-ton ship is a crippling blow to Russia’s navy and its national pride. The Mosvka played a sizeable role in Kremlin efforts to enforce a blockade in the northern Black Sea and reportedly was one of the ships involved in the seizure of Snake Island in the opening days of the war in February.

It also could hamper Moscow’s attempts to attack Odesa. Since early in the invasion, Russian navy ships have launched missile attacks and small-scale amphibious assaults, in addition to patrolling the northern Black Sea.

On Saturday, the Russian Defense Ministry posted a video it said was of Russian navy Adm. Nikolay Yevmenov meeting with some crew members of the Moskva in Sevastopol.

Analysts estimated that about 50 of an estimated 500 crew members were present at the meeting. The ministry has not made any announcement about casualties.